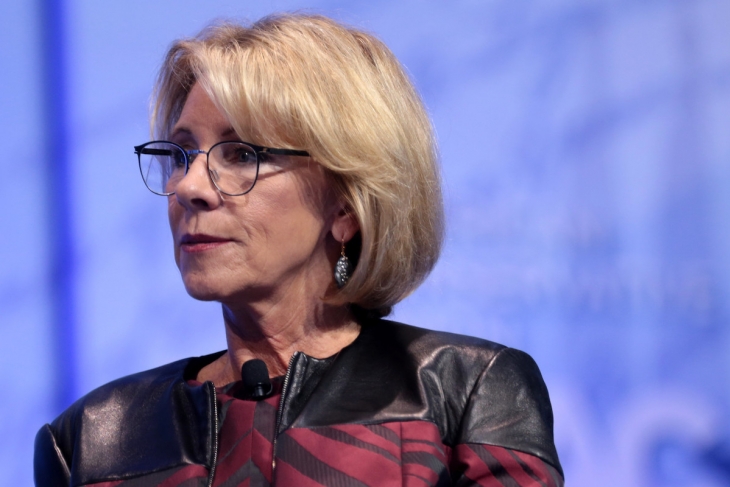 Today, Michigan became the first state to formally seek federal permission to suspend standardized testing in 2021 because of learning disruptions caused by the coronavirus. Following the abrupt nationwide cancellation of state testing last spring, the announcement was as sudden—the exams are still some ten months away—as it was unsurprising for those who have been pessimistic about reform's prospects and wary of the strange bedfellows that have steadily coalesced against annual testing.

Indeed, the pandemic has provided the anti-testing brigades an Overton window through which they are ebulliently jumping. Like lemmings to the sea, Georgia led the charge two weeks ago when it signaled its intention to pursue a waiver, followed by South Carolina two days later. Two other states—Tennessee and Oklahoma—have also had rumblings about seeking another waiver from the feds. At some point, it might be clear that testing next year is impossible—like if most schools in Michigan are shuttered next spring. But it’s way too early to make that call.

What’s more, the blowback against assessment predates Covid-19. States like Georgia had already been in the throes of a full-bore campaign against testing; the crisis was simply fuel for the fire. And they’re not alone. Since 2014, forty-four states have introduced over four hundred bills in response to the broad critiques of over-testing. Along with a recent report from FutureEd, this war on testing has been extensively covered by my colleague, Checker Finn. As the dominos continue to fall, with more states likely to line up for waivers, there are three key reasons why Secretary DeVos should reject Michigan’s request.

First, turning it down would be consistent with DeVos’s record of pushing states to think boldly and outside the box. Remember her “tough love” speech to state chiefs two years ago in response to their woefully unambitious ESSA plans: “I see too many plans that only meet the bare minimum required by the law.” Her team was similarly tough-minded in pledging to hang a scarlet letter on states for falling down on the job vis-à-vis ESSA’s financial transparency requirement.

If DeVos and company were upset at states for only meeting the “bare minimum” back then, they should be livid now that some are saying they don’t even want to do that much. For this reason alone, she would be justified in turning down any such waiver request, or at least saying to states, “It’s too soon, come back this winter if the conditions are warranted.”

Second, DeVos has an opportunity to stand tall on accountability at a time when the winds are blowing strongly against it. Earlier this week, Georgia announced an online survey to get the public’s feedback on their proposed waiver. Parents strongly support the return of testing, but DeVos could still face pressure from other groups to cede the ground once again. She’s certainly no stranger to being a Lone Ranger with controversial issues, but testing advocates would do well not to expect her to carry the water on annual assessments.

Opposing another round of waivers carries the risk of being tagged as tone deaf and insensitive at a time when our schools remain stuck in the middle of a pandemic. Popular opinion is understandably stacked in favor of providing leniency and flexibility to schools, but two years of no data would be a disaster for efforts to monitor learning loss. If we want to understand the Covid-related drag on student performance, we need testing—even without accountability strings attached.

Third, states have already inked multi-year contracts with assessment vendors, and many are still working with them to unscramble the cancellation of 2020 testing. Such negotiations are largely out of the public eye, but surely painful for both sides. The majority of costs associated with state testing programs are fixed and get incurred well before the tests are administered. This situation should encourage out-of-the-box solutions (e.g., boosting item banks and getting ahead of the typically rushed assessment cycle) that can be mutually beneficial to states and assessment providers. But kicking the can down the road again would further complicate the situation.

What this comes down to is a craven abdication of leadership on the part of states at a time when having a cost-effective—states are facing brutal budget shortfalls—and transparent reporting of assessment data is arguably more important than it’s ever been. All of this early talk about waivers is symptomatic of the larger and systemic lack of imagination that DeVos has lamented since the day she took office. Sure, if future disruption makes testing untenable, we should certainly address it then. But it’s premature to cross that bridge now, especially amid the more urgent and pressing priority of returning students to school safely.

When DeVos delivered her tough love speech on ESSA, one former state chief responded to the criticism by saying, “I appreciate the push. She’s challenging us to rethink our flexibilities.” On the question of these hastily conceived testing waivers, now would be another good time to push.