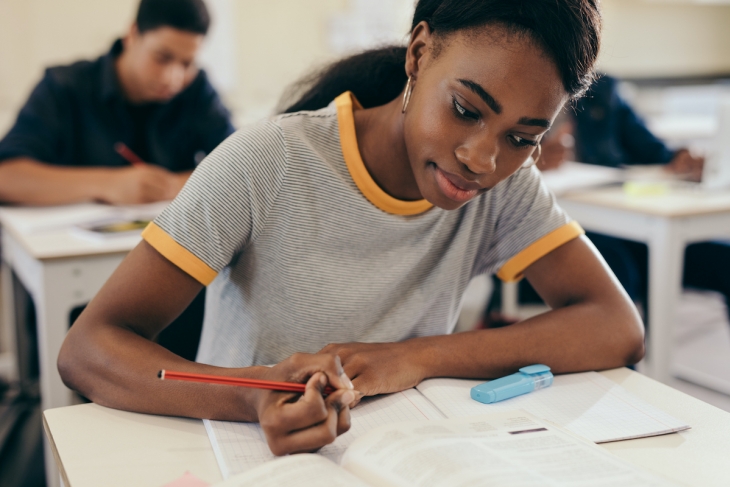 “As a broader mechanism for equity, [Advanced Placement] has fallen short, unable to overcome the powerful structural forces that disadvantage far too many students,” writes Anne Kim in a recent long-form article in Washington Monthly titled “AP’s Equity Face-Plant.” “If the ultimate goal of K–12 education is to offer equitable access to high-quality curricula leading to greater college access and success, policymakers need to rethink their approach to AP and look beyond it,” she says, offering dual enrollment, where high school students spend some of their time doing college coursework, as a promising alternative.

Kim rightly clarifies that “the answer...is not to eliminate Advanced Placement,” and that “when students have access to classes and the resources to succeed, the program provides undeniable benefits.” But the implication of her piece, intended or not, is that AP courses are failing, at least in part, because their outcomes and benefits aren’t evenly or proportionately distributed across socioeconomic and racial lines.

This is well-meaning and even, at first glance, somewhat persuasive. But it’s misguided. And worse, this sort of approach to equity, in which mechanisms that simply reveal inequity or inequality are deemed themselves to be problematic, may ultimately harm the very students it is trying to help. In short, the real problem is not Advanced Placement, it’s everything that comes before it.

The disproportionate distribution of AP’s benefits, be it additional college credit or more skills and knowledge, isn’t due to some significant inherent flaw. Advanced Placement itself is not inequitable, or broken, or racist. It’s simply difficult, its courses rigorous. And because of America’s wide-ranging systemic disadvantages, by the time Black, Hispanic, and low-income students reach eleventh grade, they are less prepared to succeed in advanced classes than their more advantaged peers, who are disproportionately White. As my colleague Chester E. Finn, Jr. is quoted as saying in the article, “The disease is in a K–12 system that is incubating an excellence gap and sustaining an excellence gap.... This is like a thermometer showing you a result you don’t like.”

But the Black, Hispanic, and low-income students who do enroll and succeed in AP courses do benefit, perhaps greatly. Kim’s piece starts with a story about Chloe Pressley, an eighteen-year-old from Washington, D.C., who earned admission to multiple prestigious universities, and will attend Yale. Pressley tells Kim that “one secret to her success...was a class schedule loaded up with the College Board’s Advanced Placement courses.” Five of them, to be exact. Kim also cites promising data that illustrate the growing impact of AP on teens like Pressley. “In 1997, Black students took 3.8 percent of all exams,” Kim writes. “As of 2019, that figure is 65 percent larger. The raw number of exams taken by Black students has also skyrocketed, from under 35,000 per year to more than 310,000 over the same period.”

But in Kim’s view of equity, the magnitude of outcomes within racial and ethnic groups is less important than the disparity in rates of outcomes between those groups. “Students like Chloe Pressley remain the exception, not the rule,” she writes. “And instead of closing educational divides, AP is widening them.”

This framing, again, is misguided. Millions of Black and Hispanic students are enrolling in challenging courses that help maximize their skills and knowledge, that earn them additional college credit, and that make them more competitive for selective universities, thereby increasing their chances of professional and financial success later in life. This is a great outcome, one that should be celebrated, and one that is facilitated, in part, by Advanced Placement.

Kim is, however, correct that we as a country should care deeply that Black, Hispanic, and other disadvantaged teenagers are less prepared to succeed in challenging courses than their more advantaged peers. And in virtually every type of policymaking—employment, housing, food security, criminal law, healthcare, social welfare, schooling, and more—changes ought to be made that make it easier for marginalized groups to succeed in America, that together will make outcomes of all kinds more equitable.

She’s also correct that, for teenagers who aren’t prepared to succeed in Advanced Placement courses, dual enrollment is a worthwhile way to get them extra preparation for college. As Kim writes, “success is not dependent on a single test,” students have a “potentially better shot at passing,” and “students who pass also have the certainty of college credit from the partner institution, while colleges vary widely in whether they accept AP (and many colleges only confer credit on top scorers anyway).” But for these same reasons, as well as some others, dual enrollment is a poor replacement for Advanced Placement. They each have different benefits for different students.

Longer-term, if the goal is to prepare more Black, Hispanic, and low-income students to succeed in our most rigorous high school classes—and it definitely should be—we must do a much better job, much earlier, of maximizing the potential of disadvantaged children. Kim recognizes this, too, writing in her closing paragraph, “the bottom line is that no single program—whether dual enrollment or AP—can substitute for the top-to-bottom reforms that K–12 education needs.”

But in an article about equity in American education, this should be the story, not a kicker. If we make changes that help a greater proportion of our disadvantaged students achieve at high levels—by, for example, creating better gifted education programs and frontloading rigorous learning early and often—we’ll diversify advanced programs like AP without lowering the very expectations that generate the benefits for the students who succeed in them. If we instead, in the name of equity, frame these beneficial advanced programs as problematic and, in response, lower their rigor or steer students away from them and into easier alternatives, many of those benefits would be lost. And it’s those students—including the millions who are Black, Hispanic, or low-income—who would stand to lose the most.