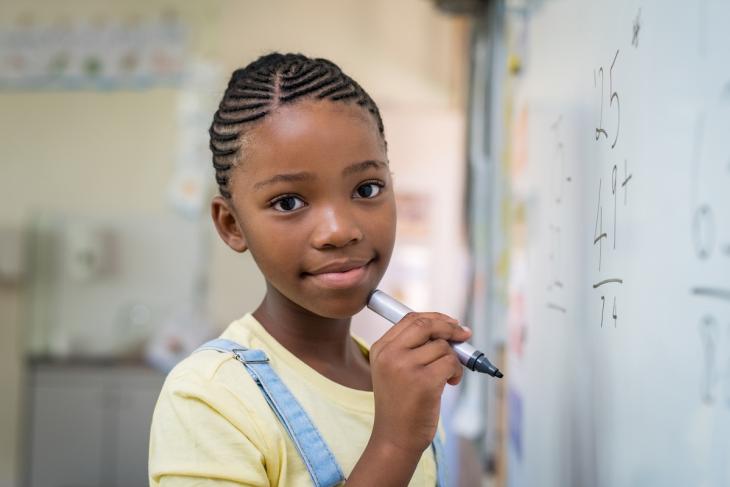 All children deserve to attend schools that educate them to the maximum of their ability and open as many opportunities as possible for them. Poor or rich, black or white, high or low achieving, this is a goal we often hear espoused but seldom see achieved. The victims of this dereliction are broad and many, but the results of the 2019 National Assessment of Education Progress (NAEP) give us good reason to focus once again on high achievers. They offer a bright spot on a generally gloomy horizon.

Most everyone has read by now about the dismal scores on our Nation’s Report Card, which again measured how fourth and eighth graders did in math and reading. Aside from fourth grade math, marks were generally flat or down, especially for our lowest-performing children.

The dismayed responses that followed were mostly justified. For those of us who spend our days striving to improve the achievement of young Americans, it was truly disheartening.

Yet a few bright spots emerged. In these pages, for example, my colleague Mike Petrilli and Chiefs for Change CEO Mike Magee detailed the heartening results in Washington, D.C., Mississippi, and Louisiana. Florida also posted some praiseworthy gains. All good, as far as it goes, but why is nobody remarking on the exceptionally strong performance of high-achieving children? Why are they yet again being ignored—and worse?

Check out figures 1 and 2, showing gains over the past decade by top-decile students and in the percentages of students attaining NAEP’s “advanced” level, which is legitimately thought of as “world class.”

The math picture, figure 1, is brightest. Notice how the trendlines, both shorter- and longer-term, are generally positive for children from all races and ethnicities, and regardless of economic status. That’s good. Period. It represents hundreds of thousands of students who are receiving a better mathematics education than they were in previous years.

Figure 1. Results of the 2019 NAEP, percentage of students achieving at advanced level and 90th percentile scores in math, by race and eligibility for free or reduced-price lunch 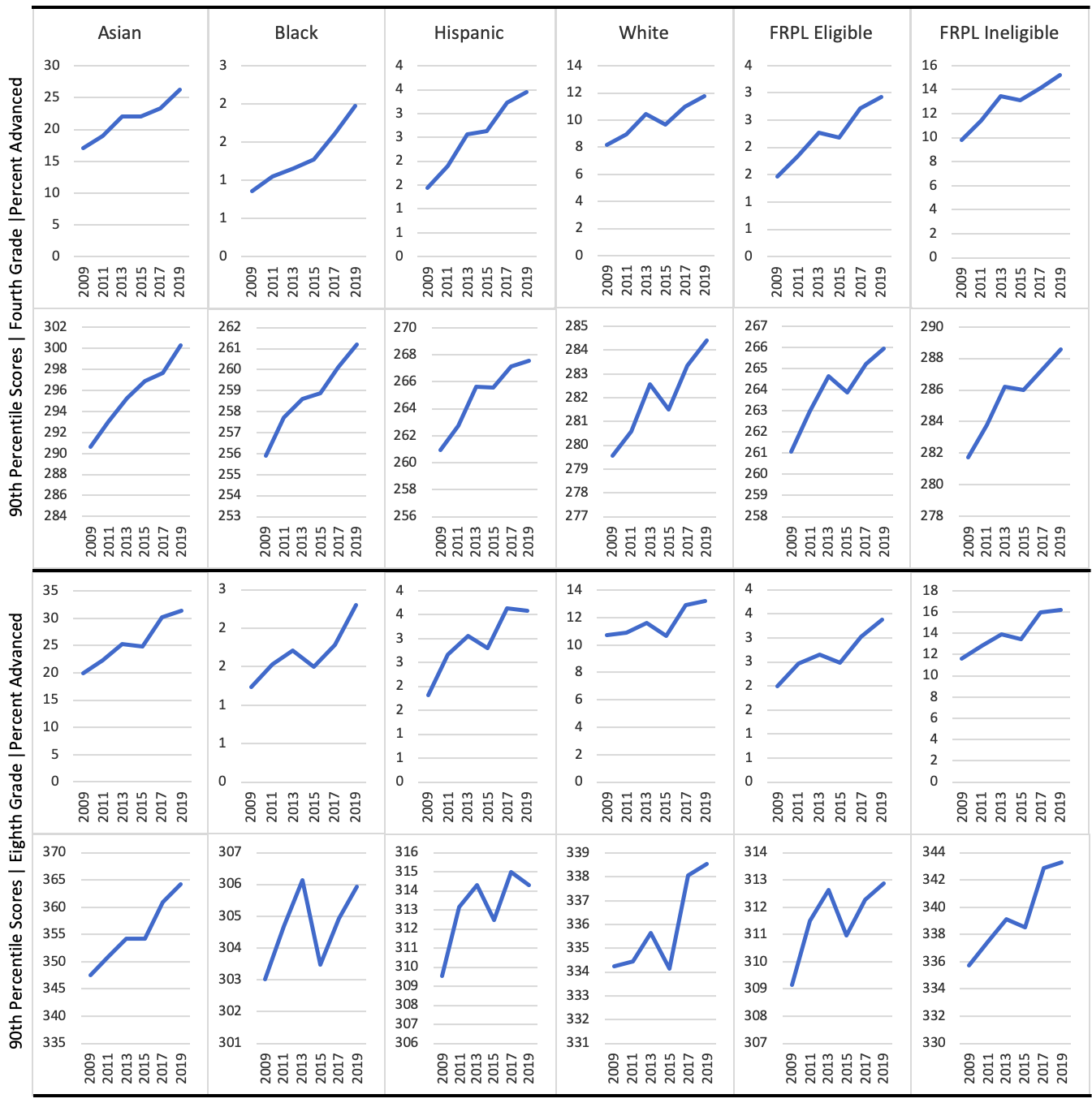 The results aren’t as positive in reading, especially in the short term, but figure 2 shows that there are bright spots there, too, notably among some disadvantaged groups.

Figure 2. Results of the 2019 NAEP, percentage of students achieving at advanced level and 90th percentile scores in reading, by race and eligibility for free or reduced-price lunch 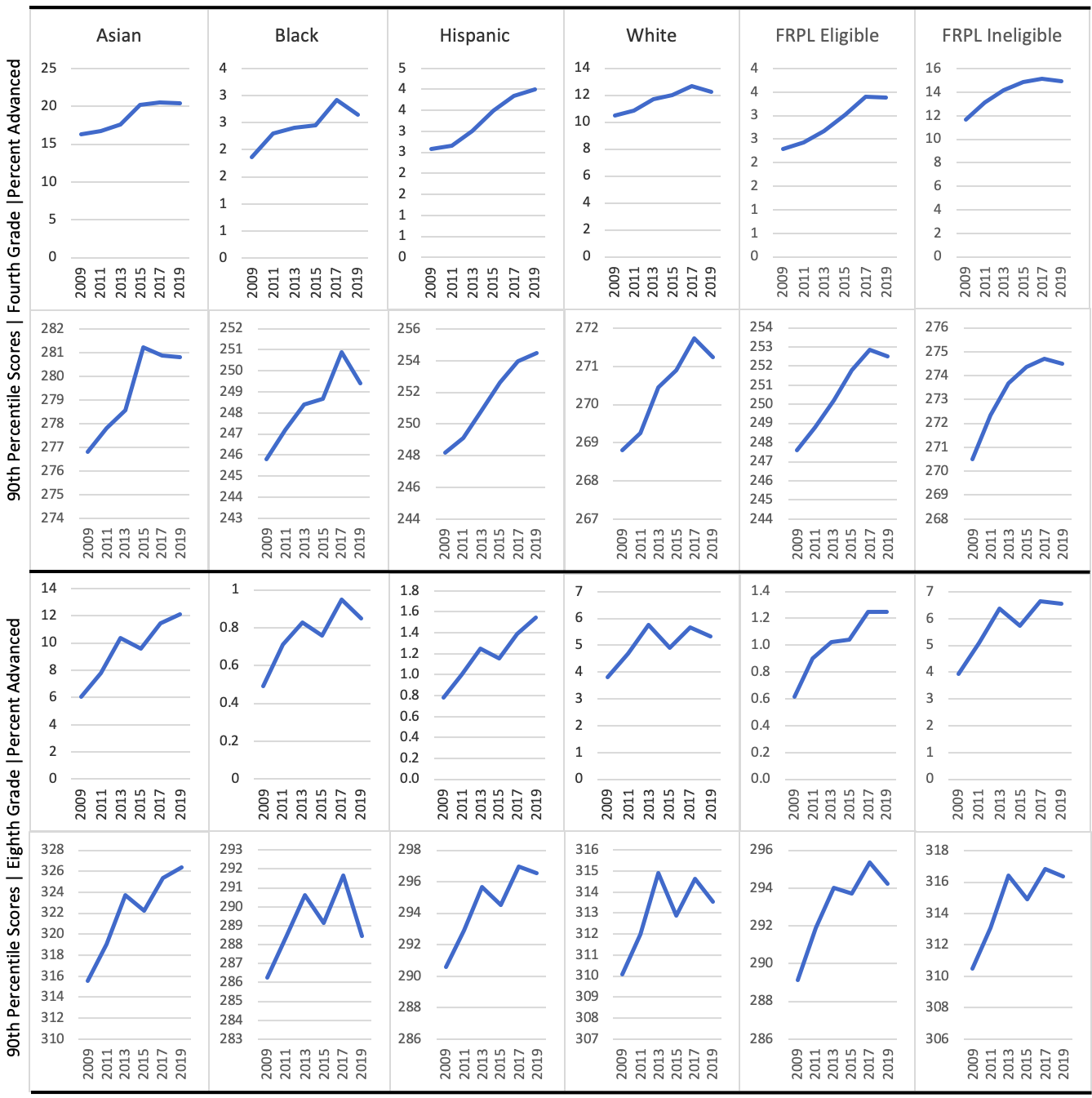 Bear in mind that the black, Hispanic, and low-income students shown here are mostly disadvantaged, and are generally placed on the deficit side of achievement gap calculations. They’re usually among the have-nots when we talk about the haves. As such, they rely more than their advantaged peers on school to give them the skills, knowledge, and wherewithal to succeed in school, work, and life. Their gains should be applauded, the more so because they contrast with so many other of the NAEP results.

Yet that’s not been happening. Instead, they’ve been widely disregarded and sometimes even characterized as a bad thing. Consider this opening paragraph of a piece written by the Wall Street Journal’s editorial board lamenting the NAEP results: “The highest-achieving students are doing better and the lowest are doing worse than a decade ago. That’s one depressing revelation from the latest Nation’s Report Card that details how America’s union-run public schools are flunking.”

Sure, the faltering scores of low performers are a big and dire problem, especially in a land that yearns to narrow its achievement gaps. But it is unequivocally not depressing that our highest achievers are doing better. Nor should we consider the two outcomes—one positive and one negative—to necessarily be “flunking.” If a young student was improving in one subject but losing ground in another, would she be flunking school? I hope not. Success deserves praise and encouragement, while deficiency deserves attention and solutions. That holds, too, for our schools.

We must, of course, dig deeper into the unsatisfactory gains for some groups, even at the highest levels, and why many other groups are static or declining. Petrilli has theorized that “shifting academic standards dramatically higher, making the tests tougher, and pushing schools to adopt curriculum aligned to those standards and tests may have inadvertently left behind the lowest performing kids.” There are always tradeoffs. In the days of No Child Left Behind, almost all of the focus was on struggling students, and that harmed higher achievers. We may or may not have overcorrected. Some other constellation of policies and factors could be influencing the NAEP results more than we know. I encourage researchers and analysts across the country to search for answers.

Whatever the causes, however, the most recent NAEP results suggest at least two outcomes are clearly established. One is that we have far too many children achieving below their grade level, and we must intensify our efforts to change that. The other is that many schools are doing something right for their high-achieving students, and it’s benefiting kids from all races, ethnicities, and economic backgrounds. The first is a problem we must solve. The second is a good outcome that deserves praise and acknowledgment.