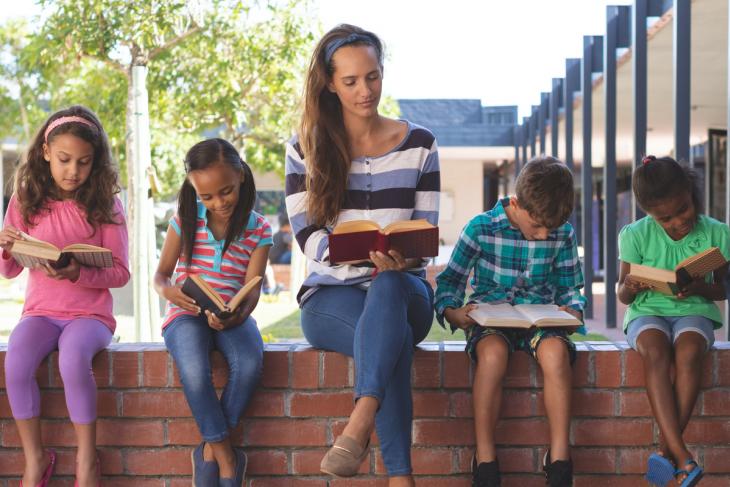 Everywhere you look, the science of reading is the toast of the town. Yes, the “reading wars” have a long and tortured history, but the publication of Emily Hanford’s groundbreaking 2018 radio documentary helped set in motion a sort of reading renaissance, the likes of which haven’t been seen since Reading First twenty years ago and Jeanne Chall’s work thirty years before that. Now a critical mass of policymakers and other stakeholders have thrown in their lot with evidence-based reading instruction. I’ve done my fair share of glass-raising too: A piece I wrote last fall in these pages was Fordham’s top read blog post for 2019.

So with the iron this hot, where do we go from here? Barring a drastic change, this newfound interest in reading science has all the makings for a slow and steady fade out twenty months from now if not sooner.

When I explain this to people I feel like Bill Paxton in Aliens raining on the parade by telling everyone how the heightened interest in reading instruction will be stopped by the education establishment. I mean the aliens. The problem is that if I’m the Bill Paxton character, I don’t know who out there is playing Ripley, the chief protagonist who knows how to survive to help take down the guardians of balanced literacy. I mean the aliens. Sorry. It happened again.

All of which is to say that, while the science of reading has caught a sizable wave in American K–12 education, I lived through similarly killer surfing ten years ago when the edu-verse coalesced around teacher evaluation. Granted, reading instruction shouldn’t be as politically complicated as evaluating teachers. After all, the AFT is on the right side of the reading science (though it’s easy to forget they were initially supportive of overhauling teacher evaluation too), and embracing the research wouldn’t require a significant financial outlay. Still, there are enough parallels with today’s fuss over early literacy that I want to share what I learned from riding the craze for better teacher evaluation once upon a time.

Lesson one: It starts with a seminal article or report

In the summer of 2009, TNTP released a report titled The Widget Effect, which rocked the education reform world. I was working for then Indiana State Superintendent Tony Bennett who, along with then-Governor Mitch Daniels, seized upon the findings (that teachers were treated as interchangeable parts as evidenced by nearly all teachers being rated good or great) to join over thirty other states to require more stringent reviews of teacher performance. This was 2011, almost two years after the release of TNTP’s report. The day I watched Governor Daniels sign our teacher bill into law was the equivalent of this month in 2020 time.

What we didn’t realize then was that what we thought were self-evidently desirable policies (e.g., tying teacher performance and compensation to student outcomes) were doomed to fail, not because of the better evaluation rubrics and processes that resulted, but in spite of them.

Lesson two: Politics is at the root of the problem

Andy Rotherham recently authored a brilliant piece examining our tendency to conflate problems of education craft with problems of education politics. Back in 2011, we thought our approach to teacher evaluation—unlike other states on the bandwagon—was wiser because we left much of the evaluation mechanics to local judgment and discretion. As an example, Indiana’s teacher effectiveness law didn’t assign a percentage to how much student test scores would be accounted for. We thought, in hindsight naïvely, that districts would use the flexibility to set a high bar. Instead, most ended up making tests only 10 percent of a teacher’s evaluation—and even that pittance was apparently too much for the forces of resistance and repeal to bear. State lawmakers are currently in the process of decoupling tests scores from teacher evaluations altogether.

In the case of reading, balanced literacy supporters aren’t ignorant of the research; they simply don’t care. Like someone who holds to their religious beliefs with clear-eyed devotion and certainty, so do the reading science deniers. The fight then isn’t about improving reading instruction as much as it is about ideology and politics. Of course, none of this will come as a surprise to those who understand the fundamentally political nature of schools and education.

Shepherding Indiana’s teacher effectiveness bill into law required an intense amount of handholding. In addition to lining up experts and other stakeholders to testify during lengthy committee hearings, there was additional groundwork involving over a year’s worth of runway. Necessarily, our energy was focused on passing a law, not operationalizing it. Besides which, policymakers and advocates are incentivized to celebrate legislative wins rather than the slow and messy work that comes afterwards.

Over a dozen states and counting have recently passed laws designed to ensure teachers are well-versed in the science of reading, but it’s doubtful whether a commensurate amount of attention has been given to high-quality curriculum adoption and training. States newly besotted with the reading science that ignore this essential follow up do so at their own peril.

Lesson four: The federal government can turbocharge or torpedo your effort

At first, President Obama and education secretary Arne Duncan were helpful in supporting our push for robust teacher evaluations. But as their enthusiasm for reform began to wane, it coincided with a collective easing off of the gas pedal nationally. Today it’s unclear how a second term under the current administration or a new one under a President Biden or Sanders would advance the cause for more reading science. All three men have at best tenuous ties to reading. In the case of the former, we have a commander in chief who doesn’t read; Biden shocked many with his comments that black parents “can’t read or write”; and Sanders seems more interested in Cuba’s literacy program than in ours (never mind that the program itself was used as a tool for authoritarianism).

While polls generally show support for education reforms, translating that support into broader change is a whole other matter. To wit, charter schools are on the verge of being politically abandoned in no small part because only 6 percent of public school students attend them. For the parents of nine out of ten public school students, the policy is primarily a theoretical one. Similarly, the lack of a natural constituency for teacher evaluation has caused many states to make a hasty retreat on the erstwhile popular issue.

When it comes to reading, 40 percent of students will learn to read no matter how they are taught. To put a finer point on this, literacy guru Timothy Shanahan says, “Our problem in reading isn’t that nothing works. It’s that everything does.” So for the remaining six out of ten public school parents, a subset will not be aware of—let alone demand—whether their children are taught using an evidence-based approach. The upshot is that most parents have no “skin in the game” vis-à-vis the science of reading.

By the time the next round of NAEP results come out at the tail end of 2021, it’s likely that today’s dream about a widespread adoption of the reading science will be a distant memory. As part of the current push to “trust” teachers and eliminate all external measures of validity, balanced literacy adherents will continue to ante up on classroom experience over brain scans or research experiments. History might not repeat itself, but it does dependably rhyme.