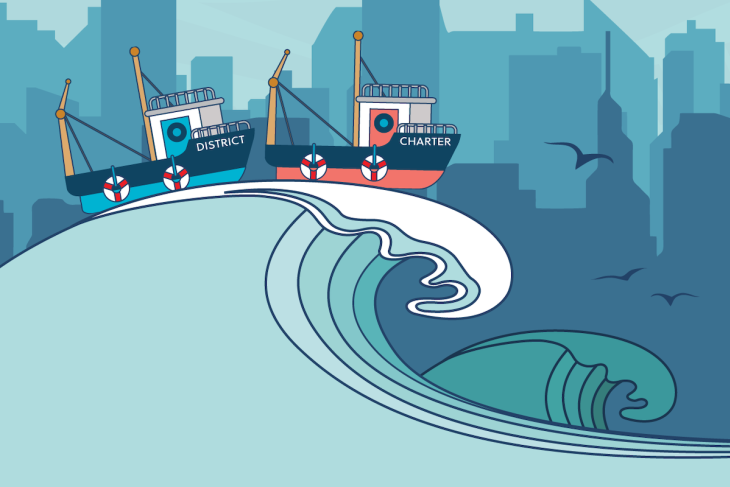 The education reform engine known as results-based accountability—which was sputtering in the pre-pandemic period—has now all but stalled out. In contrast, the engine known as school choice is firing on all cylinders. Across the country, private school choice programs are proliferating, charters are burgeoning, new schooling models that defy traditional classification are being invented, and a nontrivial percentage of families is leaving the traditional public school system—perhaps for good.

Renewed demand for more effectual alternatives to traditional school districts is one reason that billionaire Michael Bloomberg has doubled down on his investment in urban charter schools. That demand—and his promise of additional supply—is warranted in light of rigorous studies that show that attending an urban charter school is associated with faster progress in reading and math, greater odds of enrolling and persisting in an institution of higher learning, and voting—plus a lower likelihood of being incarcerated.

Nationally, charters account for an ever-growing share of total public school enrollment, and they remain the most consequential school choice offering in most metropolitan areas, with 240,000 U.S. students newly enrolled in charters since the start of the pandemic.

Yet much remains poorly understood about the wider implications of charter growth. After all, most estimates of charters’ effects on students are driven by schools that serve a subset of a community’s students—or of a racial or socioeconomic minority—whose families have self-selected into this alternative form of public education. And, like any other promising education innovation, charters may struggle to replicate the successes of early exemplars as they expand to serve a larger and/or more representative population of students and staff. We don’t know whether charter schools can close achievement gaps at scale or whether urban charters can serve as a rising tide that lifts all boats across a whole metro area, including student performance in traditional public schools.

As readers may recall, a 2019 study conducted by Fordham’s associate director of research David Griffith found that an increase in the share of Black and Hispanic students who enrolled in charter schools was indeed correlated with a district-wide increase in Black and Hispanic students’ reading and math achievement. That important finding led the Wall Street Journal editorial board to declare that “Charter Schools Ace Another Test.”

The story doesn’t end there. Good reasons exist to keep asking about the impact of growing charter enrollments on the achievement of all students, whether they attend charters or traditional (district-operated) public schools. First, the data continue to improve. Second, the boundaries that one uses to define a charter “market” could make a big difference. For example, the Phoenix metropolitan area contains at least thirty school districts, and students move relatively freely among them, so any analysis that is limited to individual school districts risks missing the forest for the trees. The metro area is where the market for better schools ultimately operates.

In addition, we recently published an analysis (and interactive website) examining school quality in the nation’s larger metro areas. That study addressed which metro areas were performing well in the pre-pandemic era, not why. One possible explanation is that metros with more charter school attendees perform better. A third purpose of the present study is to test that hypothesis.

So, with David in the driver’s seat again, our new study, Still Rising: Charter School Enrollment and Student Achievement at the Metropolitan Level, revisits these topics in greater depth and with better data.

Here’s what the new study found:

First, an increase in total charter school enrollment share is associated with a significant increase in the average math achievement of low-income, Black, and Hispanic students, especially in larger metro areas.

This is a big deal. After all, the country’s hundred largest metro areas enroll two-thirds of all K–12 pupils, so any policy that works for poor students and students of color in “large” metros has game-changing potential. And because charter schools’ share of total enrollment averages 7 percent in these places, even a conservative reading of the results suggests that most large metro areas would benefit from an increase in charter school enrollment.

Second, increases in Black and Hispanic charter school enrollment share are associated with sizable increases in the average math achievement of these student groups, especially (again) in larger metro areas.

In the average “large” metro area, roughly one in ten poor kids, one in eight Black students, and one in fifteen Hispanic students is currently enrolled in a charter school. To repeat, policies that allow those proportions to rise could yield significant gains for these pupil populations.

Some of the report’s most compelling results are for Hispanic students, consistent with a 2015 CREDO study that found Hispanic youngsters enrolled in urban charters gained twenty-two days of math learning per year. Yet despite their seemingly transformative outcomes, predominantly Hispanic charters are woefully understudied. To us, this suggests that more attention should be paid to better understanding charters’ successes with Hispanic students.

Third, an increase in total charter school enrollment share is associated with a significant narrowing of a metro area’s racial and socioeconomic math achievement gaps.

It’s possible this result is partly due to declines in the achievement of higher income and/or White students (though the estimates for these groups aren’t statistically significant). That wouldn’t be good. Still, critics who allege that charters exacerbate educational inequality for low-income students and students of color will find no support for that allegation in this study. Rather, the findings suggest that large increases in charter school enrollment share could yield similarly large reductions in longstanding racial and socioeconomic math achievement gaps.

It’s not hard to connect the dots: The United States is reeling from a pandemic that has widened and deepened achievement gaps that were already pernicious while depressing the achievement of most students. Getting more children into charter schools could help reverse those dire trends.