The Secretary of School Choice 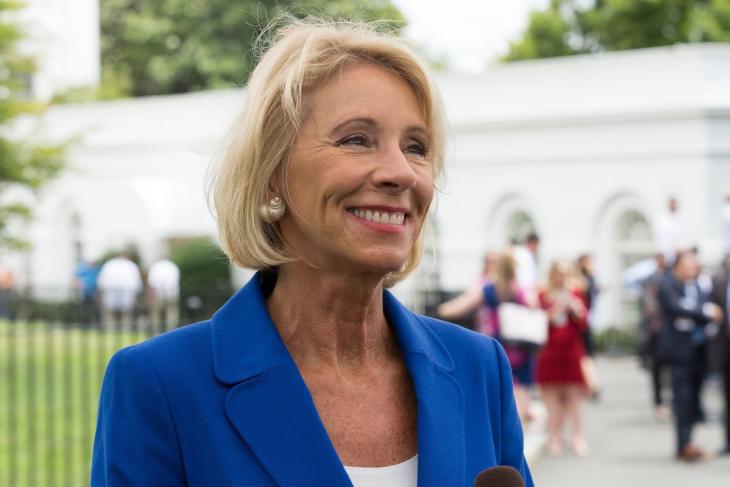 Earlier this week, I had the pleasure of speaking on a panel at the Education Writers Association’s (EWA) National Seminar, the largest annual gathering of journalists covering the education beat. With over five hundred education reporters in attendance, it was an opportunity to talk (on the record, of course) about the ins and outs of state accountability systems in the ESSA era, and to meet face-to-face with an assortment of folks I’ve long admired from afar and only previously known through social media.

Expertly moderated by Alabama Media Group’s Trisha Powell Cain, participants in our session were able to learn about and wrestle with a range of issues from the quality of state report cards to the coming storm for financial transparency. While it was an engaging conversation, it was no secret that we were appetizers for the highly anticipated main event that followed: a lunchtime plenary and Q&A with U.S. Secretary of Education Betsy DeVos, moderated by the indomitable Erica Green of the New York Times.

Introduced without irony as “one of President Trump’s longest-serving Cabinet members,” DeVos’s remarks focused on her Education Freedom Scholarships (EFS) proposal. Notwithstanding her designs to the contrary, EFS is unlikely to get past today’s, or tomorrow’s, congressional gridlock, even with some major changes. The coverage of the conversation afterwards glommed on to a few interesting tidbits, namely DeVos’s aversion to the public spotlight; her trading barbs with labor kingpin Randi Weingarten; and the unlikelihood—if provided the opportunity—of her returning for another term after 2020.

While it’s far too early to tell what’s in the cards for next November’s presidential contest, it’s not too late to say where the current education secretary stands on the ed policy schism dividing conservatives. Specifically, the question of whether choice alone is enough or if results-based accountability should be sustained and strengthened too. Based on what she said in Baltimore, it’s clear that DeVos is firmly in the former camp. My colleague Michael Petrilli has written extensively on this question, and has astutely noted that DeVos’s stance carries nontrivial repercussions where it matters most—in the states.

To wit, education reform in 2019 is in a precarious position. On international measures, our education system struggles to keep pace. Nationally, student performance has stagnated and upward mobility has stalled. ESSA has largely devolved authority away from the federal government, but it remains unclear if states will seize the opportunity to lead and to innovate. Schools and school districts are juggling a host of issues from school safety to school funding to teacher compensation. Suffice it to say, the challenges facing the nation’s public schools extend far beyond school choice.

This is why I was disappointed when DeVos was asked how she would fix public schools, and all she had to offer was, to paraphrase, “competition from choice.” Given that the vast majority of our students are in traditional public schools—and will be for the foreseeable future—reformers have a responsibility to offer a broader agenda for the kids who are in them.

Consider the reform efforts I spearheaded under the leadership of Governor Mitch Daniels and State Superintendent Tony Bennett in Indiana. DeVos, among others, often praises Hoosiers for the work we did to empower parents, but school choice was only one facet of a comprehensive policy agenda. Much less talked about are the other reforms we enacted to overhaul teacher tenure, increase access to Advanced Placement coursework, provide greater flexibility with textbooks, and safeguard instructional time. The list goes on.

In a recent interview with Governor Daniels, he reflected on these sweeping policy changes, and then shared a noteworthy hypothetical: If he was able to save just one of these reforms in a future where all of them are repealed, the policy change he would protect wouldn’t be private school choice. Rather, Daniels believes the legislation he signed on third grade reading and retention stands to have the most enduring and outsized effect on young Hoosiers. There are no silver bullets in education; any serious solution calls for silver buckshot and courageous leaders who understand this.

In spite of the negative media coverage she has endured, DeVos could have used her bully pulpit to not only promote parental choice, but to highlight the broader efforts in Indiana (and Florida) that attempt to tackle the larger issue of how to fix our traditional public schools beyond putting pressure on them via competition. To be clear, I’m a huge fan of both choice and competition, but I believe they are ultimately insufficient without the needed boost provided from a wide-angle approach.

Of course, this is a debate that is likely to continue. The limits and perverse incentives of the NCLB era (e.g. focusing on the “bubble kids”) made themselves apparent with time, and today’s blowback against standardized testing and the related accouterment are further evidence of it. While it’s arguable whether DeVos’s policy tack is more popular than that of her immediate predecessors, the appropriate reaction to accountability done wrong isn’t to jettison it, but to do it right. By signaling to conservatives that they should stick to choice alone, DeVos is overlooking the comprehensive reforms required to make more schools better for more students.