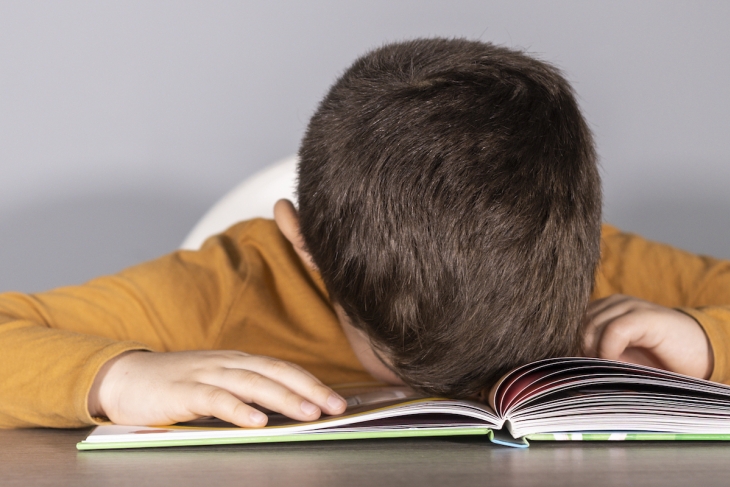 An analysis in the New York Times last month cheerily assured readers that Covid-related learning losses “look real but sub-catastrophic.” The damage also appears “to not be permanent, with students recovering at least some ground already,” opined David Wallace-Wells, a columnist for the NYT Magazine.

I’m less sanguine. I expect gaps in reading scores not just to persist, but to widen, particularly among those whose essential early childhood and elementary school years were lost or thrown into chaos by the pandemic.

It’s no surprise to see math test scores drop more than reading, as they have in New York City, for example. Nor is it reassuring that reading scores appear more resilient in the first rounds of post-pandemic testing. Both are exactly what we should have expected. Math is largely a school-based subject, instructionally-sensitive, and more likely to show immediately the effects of lost instructional time. This also makes it easier to catch kids up. But language proficiency is different, and we shouldn’t be lulled into complacency if it appears to be less impacted by Covid. Reading test scores are stubbornly tied to what happens outside of school, and there’s not much mystery why: Children of well-educated parents enjoy verbal advantages at home that grow each day. Their lives are enriched by rich dinner table conversation with educated adults, bedtime read-alouds, weekend visits to museums, all manner of summer activities, plus other out-of-school learning opportunities, sports teams, music lessons, and sundry forms of “concerted cultivation.”

Reading researcher Keith Stanovich dubbed the impact of these structural advantages and disadvantages in language and knowledge the “Matthew Effect,” after a passage in the New Testament Gospel of Matthew: “For to everyone who has, more will be given, and he will have abundance; but from him who does not have, even what he has will be taken away.” In simple language, the rich will get richer, the poor will get poorer. Privileged children come to school on day one with larger stores of knowledge and vocabulary than their disadvantaged peers. Those accumulations provide fertile soil in which to grow new knowledge and vocabulary.

My favorite illustration of this phenomenon is one I stole from Alice Wiggins, whom I worked with at the Core Knowledge Foundation years ago. She demonstrated for teachers how knowledge builds vocabulary with a series of sentences using the obscure word “excrescence” and pointing out how encountering words in context creates understanding:

By the time you read the fourth sentence, you probably figured out that an excrescence is a growth, or something that sticks out from a surface. This is how we acquire the vast majority of words in our vocabulary: not by memorization, but through repeated exposure to unfamiliar words in context. With each encounter with an unfamiliar word, the possible meanings get narrowed down until you have command of the word and can use it confidently.

But look at those sentences again. You’re able to learn the new and unfamiliar word excrescence because you already know words like “aerospace” and “drag,” what an engineer does, how it feels to be self-conscious, and what it means to suffer a stroke. You’re already rich in knowledge and vocabulary, and you just got richer. If you’re language- and knowledge-poor, you just fell a little further behind.

Critically, gaps don’t merely persist, they widen. Common sense suggests that months or years of school lost or disrupted by Covid did far less damage to kids who spent the last two years marinating in their linguistically rich homes, earning compound interest on the foundational language and knowledge they already possessed. Low-income kids in comparatively disadvantaged homes enjoyed fewer of these advantages and gained less as they spent time away from school, perhaps the most knowledge- and language-rich environment they have.

Remember the “30-million-word gap” study by Betty Hart and Todd Risley? It was once among the most commonly cited pieces of education research. Mention it today, however, and you’re likely to hear that it’s been “debunked.” Not exactly. As Tim Shanahan observed, it was “far from a perfect study,” but despite its shortcomings, the vast weight of evidence shows “environmental differences (as opposed to genetic ones) still seems to be the best explanation of why poverty kids are underprepared when reading instruction begins.”

None of the reassuring, post-Covid commentary that I’ve seen accounts for this. It is overly sanguine, at least for literacy, to analogize learning loss to “a cross-country road trip” where students ran out of gas but now “they’re back in their cars and humming along at fifty-five miles an hour again…still far away from the destination they would have arrived at if they hadn’t run out of gas.” That might be true for math, but the literacy and language proficiency destination isn’t a fixed location; what’s been lost is potential growth. The more apt analogy is compound interest. If we both have $1,000, and you put yours in an interest-bearing account while I put mine under the mattress for two years before going to the bank to deposit it in an interest-bearing account of my own, we’re earning the same interest rate from that day forward. If interest rates go up, my account will grow faster. But my savings will never catch up to yours because of the interest already added to yours while my money was under the mattress. In fact, every year you’ll pull even further ahead. The logic of the Matthew Effect suggests that time lost can’t easily be recovered. Face it, if we knew how to accelerate language proficiency, we’d have been doing it for the last half century.

None of this is intended to discourage or deprecate the earnest and energetic efforts visible in many places to make up for lost time. There’s really no other choice. But we should be skeptical of any efforts to minimize the challenge or to waive away the damage that has been done. Time not spent in environments rich in knowledge and language can never be recovered. The language-rich grew richer. The language-poor mostly waited.