Educating young Americans for citizenship is our schools’ top job 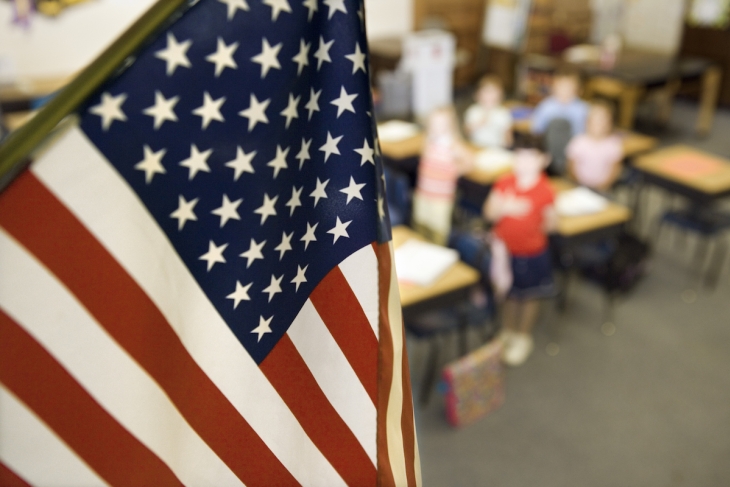 In the realm of elementary and secondary education, we so often focus on one or two trees instead of the forest. We go off and argue about the best way to teach reading, about which books belong in the school library, about whether everyone should take “college prep” courses, about how to teach race or evolution or climate change or even algebra. We fret about gifted kids and kids with disabilities, about teachers unions and school bus routes, about cafeteria food and parent engagement, about test scores and discipline codes.

Yes, there are lots of trees. But why is there a forest to begin with? It’s to develop tomorrow’s American citizens and prepare our young people for citizenship. Yet that profound and fundamental mission is so easy to forget, both because it’s so basic and because most of the time it’s not newsworthy like those hot-button issues mentioned above. Except, of course, when it gets tangled up in them.

We also sometimes err by thinking that the way schools prepare students for citizenship is simply by teaching them “civics.”

How and what to teach in civics (and history and—more broadly—social studies) is its own issue and one worth taking seriously and doing well. A handful of states—both red and blue—are doing so today, at least setting exemplary expectations for what their students should learn during the K–12 years. But getting this part of the curriculum right is just part of what goes into preparing citizens.

The rest of the curriculum matters, too. Although every American has a right and responsibility to participate in our democracy even if illiterate and innumerate, people will have more power and agency if they can read newspaper articles, possess the background to understand what they’re seeing on television and their screens, make sense of data graphs, have some grounding in science, and more.

Yet the formal curriculum itself—the whole curriculum—is just part of what schools need to get right if they’re to do as much as they can to form citizens. At least as important are the values, habits, principles, convictions, and patterns of behavior that kids acquire in school. Those don’t just come from classroom instruction. They also come from extracurricular activities, from playground time and basketball games, from how the principal handles misbehavior (and rewards good behavior), from the examples that teachers set through their own personal conduct, from whether the school climate is one of integrity and mutual respect or corner-cutting and suspicion. Are students’ rights and responsibilities taken seriously? Are parents taken seriously? I don’t go quite as far as the late Theodore Sizer—the Harvard education dean who decades ago handed me two graduate degrees—whose “Coalition of Essential Schools” wanted every participating school to “model democratic practices that involve all who are directly affected by the school.” But it’s clear to me that how schools function as organizations and the lessons in citizenship that they convey by example and precept are at least as consequential as what happens in civics class.

This is also what distinguishes great education from skills training and what differentiates the schools of a democracy from those of totalitarian regimes. We’re not just making kids learn things and obey orders. We’re turning them into tomorrow’s voters, neighbors, public servants, and community leaders.

If our schools do this well, they’ll have fulfilled their most vital responsibility. We know, of course, that even at their best they can’t do it all, that the citizens kids grow up to be are also shaped by family, community, media, and myriad institutions of civil society. But the schools’ part is indispensable, both in the formal curricular sense and in the types of communities that they model.

That’s all getting harder, to be sure, as today’s political divisions, racial tensions, and “culture wars” enter more forcefully into school governance, curricula, and operations. Autonomous schools of choice, including private and (most) charter schools, find it somewhat easier to navigate these turbulent waters because they’re not pummeled quite so hard by external pressures and politics (Sizer and his colleagues understood this). Yet district-operated schools, whether on purpose or incidentally, also convey values, habits, and precepts to their pupils. Those kids are far likelier to acquire key elements of good citizenship when their schools are intentional and consistent about what they’re conveying.

This naturally varies by community—and if it varies too much, it can widen rather than narrow the country’s divisions. I view the usual version of “local control of the schools” as a mixed blessing, but on the positive side, this form of governance adds flexibility and a degree of diversity to the enterprise such that the precepts and practices embodied in schools—including the district-operated kind—can to some extent reflect the values and priorities of the communities they serve.

Yes, it’s a balancing act. We recognize that some of the values and priorities conveyed by the schools of Portland, Oregon, say, or Brookline, Massachusetts, won’t be the same as what kids see and learn in Amarillo, Texas, or Knoxville, Tennessee. But all four communities are building Americans in their schools, and it’s important all four—and all the others—convey what it means to be an American and what it means to be an honest, truthful, tolerant, and engaged citizen.

At the Thomas B. Fordham Institute, we’ve delved into this in several ways. In the aftermath of the terrorist attacks of 9/11 and subsequently, we asked thinkers and leaders across the political spectrum to write about America and citizenship in ways that would help educators address these core topics. Over the years, we have evaluated states’ academic standards for teaching U.S. history and, more recently, civics, thereby conveying our judgment as to how well individual states are (or aren’t) setting their K–12 expectations, as well as our criteria for what those expectations should contain.

We’ve also addressed social and emotional learning and school discipline, two realms that intersect big time with the signals schools send and the examples they set for up-and-coming citizens.

It would be a fine thing if the information available to students and parents (and taxpayers and policymakers) about schools included their effectiveness on the citizen-prep front. It would also be great if states’ school-accountability systems incorporated this along with academics. Elements can be gleaned from civics tests, school-climate surveys, and the incidence (and handling) of discipline challenges. Bits may also be gathered from the media and certainly from the parent grapevine. Longitudinal studies—such as the propensity of their graduates to vote—can supply further clues. Yet much that we would like to know about schools’ impacts in this realm would require multi-year information about the life trajectories of those who once attended them. Even if we had such information, we’d need to remember that what young people take from school is only part of what molds the adults they become.

Yet to end where I began, the preparation of those young people for citizenship is the ultimate reason we send them to school in the first place. It’s not just to teach them the Three R’s, important as that is, or to expose them to chemistry or poetry or computer programming. We educate kids in many ways and for many reasons. But none matters more in the long run that their readiness to participate in sustaining the vitality and integrity of our democratic republic.