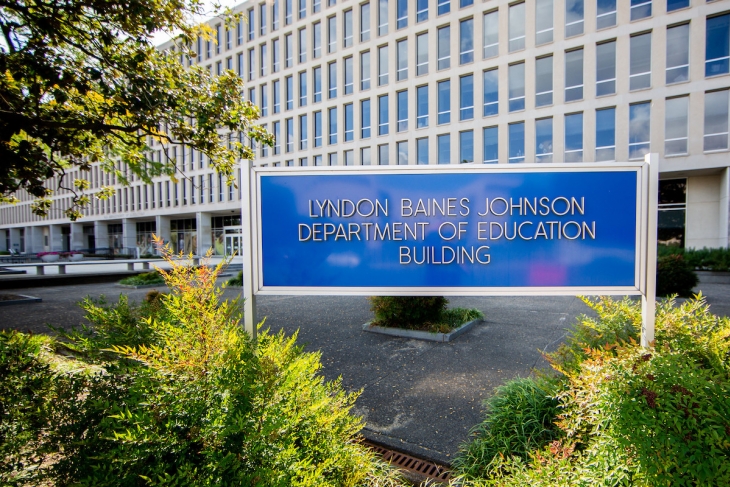 Things are getting messy in the world of assessment. What started off as a well-intentioned offer from the federal government to afford greater flexibility to states in light of the pandemic while still requiring state tests to go forward this year—a hard line that some testing advocates celebrated, albeit prematurely in hindsight—has quickly morphed into complaints that the waiver process lacks transparency and will allow states to back away from the equity guardrails provided by statewide exams. To wit, the U.S. Department of Education raised eyebrows late last month by approving Colorado’s compromise plan to pare down the amount of standardized testing by 50 percent. That decision raised questions as to where the department would ultimately draw the line, an issue I began exploring in my last post. But the feds really stepped in it last week when they green-lighted D.C.’s request to forego federal testing requirements altogether.

Indeed, the D.C. decision was a puzzling one. This is a district of 50,000 students that spends a whopping $30,000 annually per pupil. The city’s charter sector accounts for an additional 44,000 students, for a total enrollment approaching 95,000. By giving D.C. and its charters a free pass, Uncle Sam surrendered access to an invaluable external check on what taxpayers have been paying for and revealed a willingness, contrary to official statements, to release certain jurisdictions from the annual testing required under federal law. What’s more, the feds inexplicably opened themselves up to attack from both testing supporters and skeptics alike in the process. The department should have insisted that testing in the nation’s capital be postponed to the fall rather than cancelled outright. In fact, D.C.’s neighbors to the north in Maryland and Pennsylvania are planning on doing just that.

Stepping back for a moment, the feds have been responding to the dozen or so states vying for assessment waivers in one of three ways: approval, denial, or “waiver not required at this time.” While education media outlets have been understandably focused on the first two actions, there’s a lot happening below the radar in states that are being told a waiver isn’t necessary. By my lights, the distinction between being approved and being told not to seek a waiver is one without a difference. Consider what’s happening in three states that fall into this gray category: California, New Mexico, and New Jersey. What shines through is that there is no obvious rationale for how the feds are pronouncing judgment.

Moving west to east, California is ground zero for the increased confusion and head scratching—where what happens between now and the end of July, the closing of the state’s extended testing window, is about as clear as mud. Things started going off the rails a couple of weeks ago when the California press reported that the state had received the thumbs up to use local assessments in lieu of statewide exams. The U.S. Department of Education quickly refuted the article’s veracity in a back-and-forth exchange with national reporters that suggested a sort of palace intrigue between state and federal officials. After the initial smoke cleared, a new level of semantic hellscape came into view: As long as California continues to “provide” statewide tests, local districts can select alternatives if the tests are not “viable” to administer. Talk about a crack big enough to a drive a school bus through! How will state officials, with north of six million students and over a thousand districts, figure out—in an incredibly short period of time—who qualifies for exceptions to the state’s summative exams?

As perplexing as California’s plight may be, New Mexico is in a similar boat. The state’s education agency initially wanted to skip state testing entirely, but then shifted to a convoluted plan to sample 1 percent of all students. New Mexico has since backed off this approach, too, and is now asking schools to administer state exams to the “greatest extent possible.” How are districts responding to the mixed messages? If Albuquerque Public Schools—New Mexico’s largest district with 89,000 students—is any indication, reformers should be worried. Last week, the district sent out an online survey telling parents that the state test would not be made available to everyone:

The assessment will be offered to a limited number of participants. It will be randomly selected whether your student will take the ELA or mathematics portion. While there will be no individual student reports available, participation will play a vital part in the norming of the test for years to come… Testing dates will be April 26–May 7, 2021… There will be no district provided transportation to the test center site.

Concerns about lower student participation rates on state exams this spring are problematic enough without states taking proactive action to depress turnout even further. It’s disappointing that the feds have ostensibly turned a blind eye to this type of egregious behavior.

Finally, last week’s approval of New Jersey’s plan to use a newly developed diagnostic tool, called “Start Strong,” instead of the state assessments, barely registered above the din in D.C. But the decision was a pleasant surprise to the state’s teachers union, among other groups, that celebrated their second consecutive bye from state testing. With a wink and a nod, the feds lent its imprimatur to a forty-five to sixty minute “dipstick” administered in the fall as a substitute for the full battery of state exams, even though state officials have gone on record saying that Start Strong is not designed to replace statewide testing.

Having been given an inch, some states and districts across the country are evidently in the process of taking a mile. What’s become clear through this waiver process is that there is little rhyme or reason to how the department is rendering its verdicts. Their regrettable inconsistency means there won’t be any good national data to be had from this calamity, and whether states will have usable data of their own is up in the air, too. It’s all a significant blow to results-based accountability, flying in the face of the civil rights protections enshrined in federal law. The uneven patchwork now before us was an avoidable if not altogether unsurprising outcome.