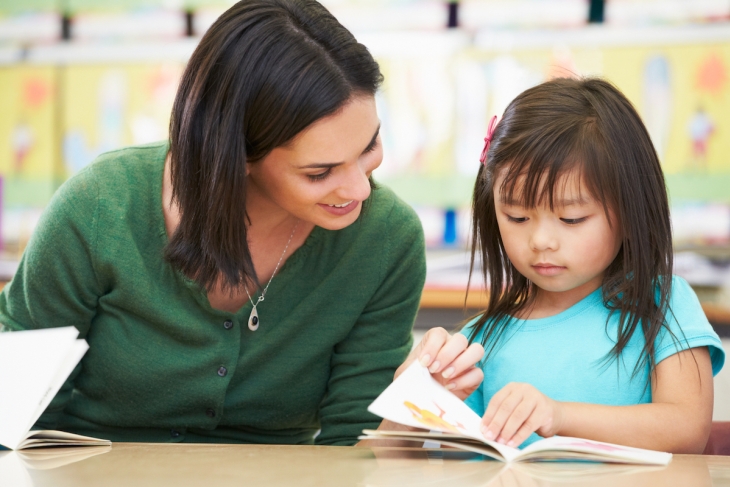 Since 2013, thirty states have passed legislation or implemented new policies related to the “science of reading.” Their collective effort to change how early reading is taught in America’s classrooms is the focus of an excellent new project by Education Week’s Sarah Schwartz titled, “Science of Reading: Where Rhetoric Meets Reality.” Her series homes in on the complex and often messy work of systems change required to shift hearts, minds, and practices among teachers, administrators, and policymakers in order to bring reading instruction in line with the research consensus. As part of this, Schwartz—building upon the groundbreaking reporting of Emily Hanford—examines how North Carolina’s version of the law, enacted in the middle of the pandemic and dubbed the “Excellent Public Schools Act,” is playing out

The centerpiece of Schwartz’s package of articles looks at the Tar Heel State’s rollout of literacy reform, principally through the eyes of Raul Olivares Jr., a kindergarten teacher in Washington, North Carolina. Like many of his colleagues, Olivares went through an educator preparation program (EPP) that emphasized three-cueing, a misbegotten yet pervasive reading strategy that encourages children to make educated guesses when confronted with an unfamiliar word. Teaching students to rely on pictures and other clues has been shown to be deleterious to children in developing the foundational skills needed to read well. Part of the challenge, then, was for Olivares to unlearn what he was taught as a pre-service teacher.

The most sweeping provision of North Carolina’s statute is a requirement that every K–5 teacher undergo the same intensive, two-year professional development program on the science of reading. The training—Language Essentials for Teachers of Reading and Spelling or LETRS—is costing the state $50 million to implement over two years and takes about 160 hours to complete. Often described as a graduate-level course, LETRS was used by Mississippi as part of its now-famous rise out of the reading cellar. The key question is whether LETRS, a hugely popular program, albeit with ambiguous results, will translate into better classroom practice. Olivares himself seems torn on the matter. On the one hand, the training helped him reflect on his teaching practice: “I almost feel like I need to say ‘I’m sorry’ to some of the kids I taught before.” But the lengthy coursework was taxing:

[Olivares] feels drained from this past school year. He spent extra time on the weekends doing his assignments for LETRS training, sacrificing precious time with his wife and three kids... And he doesn’t anticipate things slowing down anytime soon... Stress and anxiety are starting to bubble up when Olivares thinks about the next few months… He wants to move beyond the same question that he feels like he’s been asking himself since the beginning of the year.

“You can read all about [the science of reading], but how do you truly apply it?” For right now, at least, [Olivares] feels like he has no choice but to figure that out by himself.

Olivares’s plight raises important questions about the sustainability of this massive effort. Who will help educators change and refine their practice? How do schools create a culture that supports these changes even as staff come and go? (There are already reports that some aren’t taking the training seriously.) Shaping teaching at the scale North Carolina is asking of its schools and districts will require political will, but above all requires patience—which is often at odds with political timelines—as academic improvements may take years to materialize. Indeed, the state is implementing its law in phases, with full implementation not expected before 2024–25.

To get at this question of implementation and sustainability, I helped to kick off a conversation in Raleigh last month as part of a related project led by The Hunt Institute. If North Carolina’s experience thus far is any indication, there’s reason for guarded optimism. It’s early days, but for the first time in the state’s history, the K–12 system and higher ed appear to be singing from the same hymnal in believing that what schools do in the early grades must be evidence-based—and agreeing, more or less, on said evidence. Starting this fall, the UNC System will be following a unified literacy framework across its fifteen EPPs. Bringing these two worlds—K–12 and higher ed—into alignment on reading instruction is a necessary step.

At the same time, the state’s department of education will be hiring and deploying literacy coaches in every district. Notably, this represents a significant deviation from Mississippi’s playbook, which assigned its coaches to individual schools. Although less expensive, it remains to be seen how effectual this approach will be, as coaching often depends upon a more direct link with the classroom—especially given the huge size of many of North Carolina’s 115 county-wide districts. To its credit, the state has been working diligently to manage expectations, underscoring how transforming pedagogy requires playing the long game. But the risk remains.

According to state officials, about 70 percent of first graders in North Carolina were proficient in reading in 2019. Following the pandemic, that dropped to just 38 percent. Although America’s lackluster performance in reading long predates Covid, today’s renewed interest—among North Carolinians and many others—in solving the problems of poor reading instruction makes sense if for no other reason than early literacy being the one topic within education policy where there’s something close to a settled science. If states can stick with it for the long haul, and if teachers like Olivares receive the guidance and support they’re seeking, they might finally make some headway in establishing a coherent literacy policy that is serious about every child learning how to read.