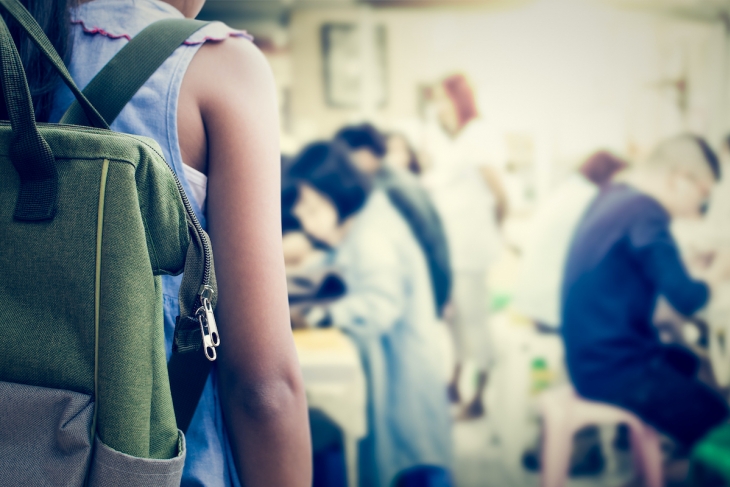 Perhaps it is only when we lose something that we realize its true value. A recent study by Matthew Kraft and Manuel Monti-Nussbaum finds that in-person teaching time in the classroom—now a precious commodity that many students and teachers won’t experience again for a while—was not properly safeguarded when we had it.

This mostly descriptive study examines an understudied topic: the prevalence of external interruptions during class. That is, interruptions originating from outside the room, such as intercom announcements, visits from other teachers or staff, calls to the teacher’s desk phone, and tardy students. We know that time on task is critical to learning, and that time off-task is detrimental, so the study asks whether we make the best use of the time we’ve got in K–12 classrooms.

Researchers collected data in a medium-sized urban school district, identified as Providence Public Schools in Rhode Island, in 2017 and 2018. Providence, which serves mostly families of color and low-income students (80 percent receive subsidized lunches), is broadly representative of urban public school systems except that it serves more Hispanic students. Analysts had two years of school climate data from Panorama Education surveys administered annually to administrators, teachers, and students in grades three to twelve. They added questions about external interruptions to the surveys and roughly seventy-five administrators, 1,500 teachers, and 14,000 students responded in both years. They also recruited high schools to participate in the portion of the study wherein classrooms were observed for external interruptions. Researchers collected data in the classrooms of ten teachers in five high schools, not randomly chosen, but nonetheless a huge value added to the survey data alone. The teachers were mostly white and had an average of ten years of experience. If we suppose that experienced teachers are better at getting students back on track after interruptions, the observational results are likely conservative.

The research team observed a total of sixty-three class periods between March and June 2017, using a purposive approach that ensured coverage of different grade levels and subjects, days in the week, and periods in the day. On average, classes were sixty-six minutes long and had fourteen students in attendance. Besides the interruption type, observers noted what occurred immediately after the interruption, describing any disruption caused by the interruption (e.g., Tony comes in late due to a speeding ticket and explains to five other students how he was pulled over). In the sixty-three observed periods, they recorded a total of 185 external interruptions. This translates to 2.9 interruptions per hour of class or 15.3 per school day on average. There was substantial variation across the five schools, however, ranging from 8.7 to 24.3 interruptions per school day. Interestingly, the observation estimate of 15.3 per school day is quite close to what teachers and students self-reported on surveys in these same schools, which was 13.9 and 12.3 interruptions per day, respectively.

Students arriving late were the leading source of external interruption, comprising 38 percent of the total. Second were visits by other teachers, staff, or administrators, amounting to 17 percent of the total. None of those visits were unannounced teacher evaluations; they tended to be other teachers looking to borrow materials or office staff delivering messages to students. Intercom announcements were 14 percent of the total, and calls to desk phones rounded out the top four, comprising 12 percent of interruptions. Survey data from teachers support the observational data in showing that late students are the most common source of interruption, followed by the intercom, and calls to classroom phones.

Interruptions occurred most often from 8:00–9:00 a.m. and 2:00 –3:00 p.m.—the beginning and end of the school day. Over half of the interruptions ended up in disruptions that lasted longer than the interruption itself. Accounting for all of this, the average length of time lost for each interruption and possible disruption was seventy-eight seconds. Kraft and Monti-Nussbaum project that students lose nearly ten days across an academic year due to external interruptions. Even taking out the most-common interruption—tardy students—it is still 6.7 lost days’ worth of instructional time. Correlational data show a negative relationship between the frequency of external interruptions and student achievement on math and English language arts PARCC tests.

The authors note that most of the observed interruptions (intercom announcements, classroom phone calls, and classroom visits) are fully within the power of school leaders to address. For instance, Success Academy shows that, with proper handling, outside intrusions can be curtailed with minimal time off task. Sure, they and other high-performing schools might also choose to extend the school day or year for additional instructional time, but they wring every productive minute from their regular time, too.

It may be the biggest and lengthiest interruption of all—the pandemic-induced halt of in-classroom instruction—that forces schools to make the best use of their in-person teaching time when it returns. Let’s hope they are ready to protect it.

SOURCE: Matthew A. Kraft and Manuel Monti-Nussbaum, “The Big Problem with Little Interruptions to Classroom Learning,” retrieved from Annenberg Institute at Brown University (May 2020).