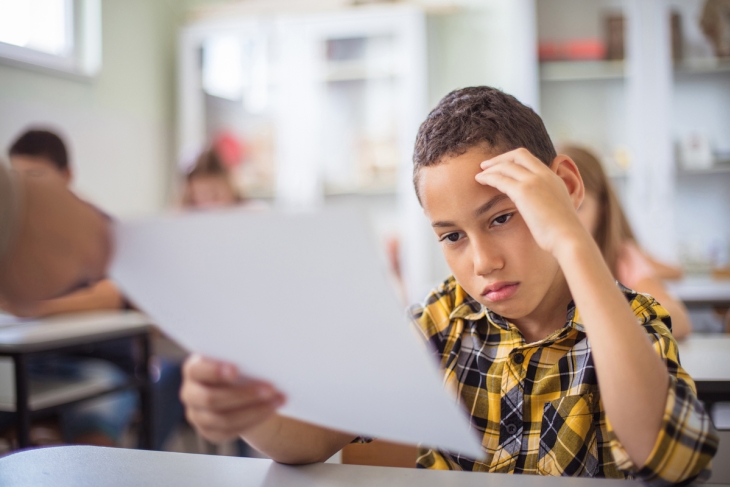 Editor's note: This post was originally published on tomloveless.com.

Implementing the Common Core was provided as the impetus for the change. When first proposed, district officials summed up the reform as, “There would no longer be honors or gifted mathematics classes, and there would no longer be Algebra I in eighth grade due to the Common Core State Standards in 8th grade.” Parents received a flyer from the district reinforcing this message, explaining, “The Common Core State Standards in Math (CCSS-M) require a change in the course sequence for mathematics in grades 6–12.” Phi Daro, one of Common Core’s coauthors, served as a consultant to the district on both the design and political strategy of the detracking plan.

The policy was controversial from the start. Parents showed up in community meetings to voice opposition, and a petition urging the district to reverse the change began circulating. District officials launched a public relations campaign to justify the policy. Focused on the goal of greater equity, that campaign continues today. SFUSD declared detracking a great success, claiming that the graduating class of 2018–19, the first graduating class affected by the policy when in eighth grade, saw a drop in Algebra 1 repeat rates from 40 percent to 8 percent and that, compared to the previous year, about 10 percent more students in the class took math courses beyond Algebra II. Moreover, the district reported enrollment gains by Black and Hispanic students in advanced courses.

Important publications applauded SFUSD and congratulated the district on the early evidence of success. Education Week ran a story in 2018, “A Bold Effort to End Tracking in Algebra Shows Promise,” that described the reforms with these words: “Part of an ambitious project to end the relentless assignment of underserved students into lower-level math, the city now requires all students to take math courses of equal rigor through geometry, in classrooms that are no longer segregated by ability.” The National Council of Teachers of Mathematics (NCTM) issued a policy brief portraying the detracking effort as a model for the country. Omitted from these reviews was the fact that the “lower-level math” to which non-algebra eighth-graders were assigned was Common Core Eighth Grade Math, which SFUSD and NCTM had spent a decade depicting as a rigorous math course, as they do currently.

Jo Boaler, noted math reformer, professor at Stanford, and critic of tracking, teamed up with Alan Schoenfeld, Phil Daro and others to write “How One City Got Math Right” for The Hechinger Report, and Boaler and Schoenfeld published an op-ed, “New Math Pays Dividends for SF Schools” in the San Francisco Chronicle.

In this public relations campaign, there was no mention of math achievement or test scores. Course enrollments and passing grades were presented as meaningful measures by which to measure the success of detracking.

They are bad measures. Course enrollments are a means to an end—student learning—not an end unto themselves. If a district enrolls students in courses that fail to teach important content, nothing has been accomplished. Boosting enrollment in advanced courses, therefore, is of limited value.1 It’s also a statistic, along with grades, that is easily manipulated. No matter the school district, if word spreads that the superintendent would like to see more kids enrolled in higher math classes and fewer D and F grades in those classes, enrollments will go up and the number of D’s and F’s will go down.

Families for San Francisco, a parent advocacy group, acquired data from the district under the California Public Records Act (the state’s version of the Freedom of Information Act). The group’s analysis calls into question the district’s assertions. As mentioned previously, repeat rates for Algebra I dropped sharply after the elimination of Algebra I in eighth grade, but whether the reform had anything to do with that is questionable. The falling repeat rate occurred after the district changed the rules for passing the course, eliminating a requirement that students pass a state-designed end of course exam in Algebra I before gaining placement in Geometry. In a presentation prepared by the district, speaker notes to the relevant slide admit, “The drop from 40 percent of students repeating Algebra 1 to 8 percent of students repeating Algebra 1, we saw as a one-time major drop due to both the change in course sequence and the change in placement policy.”

The claim that more students were taking “advanced math” classes (defined here as beyond Algebra II) also deserves scrutiny. Enrollment in calculus courses declined post-reform. The claim rests on a “compression” course the district offers, combining Algebra II and precalculus into a single-year course. The Families for San Francisco analysis shows that once the enrollment figures for the compression course are excluded, the enrollment gains evaporate. Why should they be excluded? The University of California rejected the district’s classification of the compression course as “advanced math,” primarily because the course topics fall short of content specifications for precalculus.

The conventional way to measure achievement gaps—and progress towards closing them—is with scores on achievement tests. California students take the Smarter Balanced assessments in grades three through eight and in grade eleven. Following SFUSD’s analytical strategy, let’s compare scores from 2015, the last cohort of eleventh-graders under the previous policy, and 2019, the last cohort with pre-pandemic test scores.2 Please be alerted, however, that both analyses, SFUSD’s and the one presented here, fall far short of supporting causal claims. The purpose of the current analysis is to illustrate that SFUSD’s public relations campaign omitted crucial information to determine what’s going on.

As displayed in Table 1, SFUSD’s scores for eleventh-grade mathematics remained flat from 2015 (scale score of 2611) to 2019 (scale score of 2610), moving only a single point. Table 1 shows the breakdown by racial and ethnic groups. Black students made a small gain (+2), Hispanic scores declined (-14), White students gained (+17), and Asian students registered the largest gains (+22). 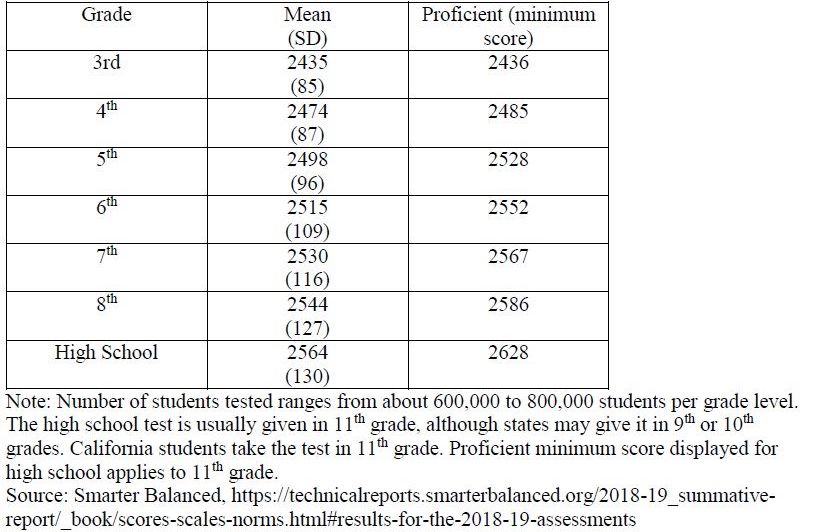 Summing up: Black and Hispanic eleventh-graders in San Francisco score about the same as or lower than the typical fifth-grader who took the same math test. Black eleventh-graders fall just short of the threshold for being considered proficient in fourth-grade math and well below the cut point for demonstrating fifth-grade proficiency. The situation is appalling.

Contrary to the district’s spin, the trend towards greater equity is not headed in the right direction. Gaps are widening. Perhaps this trend is statewide and not just a SFUSD phenomenon.

Table 3 supplies the gap calculations from the data above in Table 1, along with a comparison to statewide trends. For example, at the state level, the eleventh-grade Black-White gap grew by 11 points—from 94 to 105—while in SFUSD, the gap expanded by 15 points (from 143 to 158). The Hispanic-White gap provides a more dramatic contrast. The state level gap grew by only 5 points, but in San Francisco, it expanded by a whopping 31 points. Glancing back at Table 2 again will provide context. The 31-point expansion is larger than the 20-point difference in mean scores for Smarter Balanced’s eighth-grade and high school assessments. That’s a big change.

With both gaps, SFUSD evidenced greater inequities than state averages in 2015, and that relative underperformance worsened by 2019. The district’s anti-tracking public relations campaign, by focusing on metrics such as grades and course enrollments, diverts attention from the harsh reality that SFUSD is headed in the wrong direction on equity.

Could the situation be even worse?

Finally, as bad as the preceding data look, the reality of the district’s poor math achievement is probably worse. SFUSD has exceptionally low rates of test participation on the state test, especially among Black and Hispanic students. Don’t forget: This is the test that state and district officials use for accountability purposes. Participation is mandated by both federal and state law. If the students who don’t take the test tend to be low achievers—usually a fair assumption—the district’s test score performance could fall even lower once those students are included.

Table 4. 11th-grade students tested as a percentage of students enrolled

San Francisco Unified School District embarked on a detracking initiative in 2015, followed by an extensive public relations campaign to portray the policy as having successfully narrowed achievement gaps. The campaign omitted assessment data indicating that the Black-White and Hispanic-White achievement gaps have widened, not narrowed, the exact opposite of the district’s intention and of the story the district was selling to the public. Only SFUSD possesses the data needed to conduct a formal evaluation that would credibly identify the causal factors producing such dismal results.

Whether detracking can assist in the quest for greater equity is an open question. It could, in fact, exacerbate inequities by favoring high achieving children from upper-income families—who can afford private sector workarounds—or with parents savvy enough to negotiate the bureaucratic hurdles SFUSD has erected to impede acceleration. As I have written elsewhere, the voluminous literature on tracking is better at describing problems than in solving them. The evidence that detracking promotes equity is sparse, mostly drawing on case studies that are restricted in terms of generalizability of findings to other settings and with research designs that do not support causal inferences.

If SFUSD would now approach tracking with an open mind, officials need not look far to discover equitable possibilities. Across the bay, David Card, a scholar at University of California, Berkeley, won the 2021 Nobel Prize in Economics for his research applying innovative econometrics to thorny public policy problems. Card’s recent studies, conducted with colleague Laura Giuliano, investigate tracking. In 2014, Card and Giuliano published a paper evaluating an urban district’s tracking program based on prior achievement. In particular, disadvantaged students and students of color benefitted from an accelerated curriculum, with no negative spillover effects for students pursuing the regular course of study. Card and Giuliano concluded, “Our findings suggest that a comprehensive tracking program that establishes a separate classroom in every school for the top‐performing students could significantly boost the performance of the most talented students in even the poorest neighborhoods, at little or no cost to other students or the District’s budget.”

Card and Giuliano’s current project studies two large urban districts in Florida, predominantly Black and Hispanic, that provide mathematically talented students with the opportunity to accelerate through middle school math courses. When these students enter high school, they will have already completed Algebra I and Geometry. They begin high school two years ahead of students in San Francisco, opening up greater opportunities to take Advanced Placement (AP) courses in later years.

Which system is more equitable?

2 California employs “Black or African American” and “Hispanic or Latino” as reporting categories. After Table 1, for the sake of clarity, the terms are shortened to “Black” and “Hispanic” in both tables and the narrative.

3 Using 2018 scores, the cohort of eleventh-graders first affected by detracked eighth-grade courses in 2015, would not change the analysis significantly except for one aspect: The achievement gaps associated with race and ethnicity were larger in 2018 because of higher scores for White students. 2018 scores were Asian (2682), Black or African American (2479), Hispanic or Latino (2497), White (2650).

Tom Loveless, a former sixth-grade teacher and Harvard public policy professor, is an expert on student achievement, education policy, and reform in K-12 schools. He also is a member of the National Math Advisory Panel.