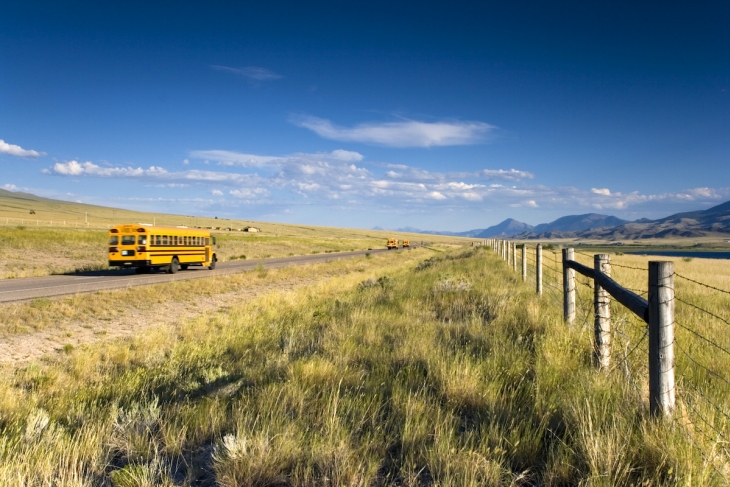 The National Center for Rural Education Research Networks (NCRERN) is a recently established organization out of Harvard that studies and supports a network of rural school districts in New York and Ohio. To better understand how these districts were navigating the pandemic, NCRERN staff conducted phone interviews with district officials and other leaders. They spoke to representatives from forty of their forty-nine partner districts during the month of April, approximately three to five weeks after school shutdowns. This summer, they published a report that outlines the results in four key areas: meeting students’ basic needs, facilitating access to learning, educating students, and building community.

Districts focused on three aspects of basic needs: access to food, physical safety, and mental health. When schools officially closed, the education departments in both states emphasized how critical it was for districts to continue distributing meals. Many families were unable to leave their homes or arrange transportation to school sites, so districts had to get creative. Some rose to the challenge by creating meal delivery programs where school bus drivers dropped off food at designated stops or delivered it door to door.

District officials were worried that students might be experiencing physical abuse at home and couldn’t seek help. Their concern is understandable: In-person classes allow teachers and staff to keep an eye out for signs of abuse and neglect, but virtual learning makes that far more difficult. To complicate matters further, districts struggled to get in touch with some families despite intensive outreach efforts. In an effort to connect with these missing students and ensure their safety, some schools sent school resource officers to conduct wellness checks.

Addressing students’ social and emotional health was also a top priority. In fact, based on interview responses, districts appeared to place more emphasis on supporting students’ mental health than on academic progress. For the most part, teachers were responsible for addressing mental health concerns. They identified struggling students and connected them with school counselors, social workers, and psychologists. District officials also expressed frustration with the lack of social and emotional health resources at their disposal.

As far as learning access, rural districts in both states reported that, like their suburban and urban counterparts, students were struggling with connectivity issues. Twelve districts in New York and an additional three in Ohio had one-to-one device programs in place prior to the pandemic, making their transition to remote learning a little easier. Most schools were able to distribute devices to students who needed them. A lack of stable internet access, though, proved to be a major problem. The magnitude varied—some districts only had a handful of students without internet, while others reported as many as 33 percent—but nearly every district acknowledged the issue. School leaders took several approaches to address it, including creating community maps that displayed locations with free Wi-Fi, purchasing cellular data plans for students, connecting families with low-cost internet, and buying and distributing individual hotspots. One district reported spending more than $25,000 for ninety-seven hotspots.

In terms of educating students via distance learning, districts focused on instruction, curriculum, grading, and student engagement. Instruction took one of three forms: synchronous online learning, asynchronous online learning, or self-guided learning through packets or workbooks. Many teachers focused on reviewing previous content rather than presenting new material. Districts also reported that mimicking a typical six-hour school day on digital platforms like Zoom was difficult for students, so they limited online hours. Grading practices varied. Some districts maintained their normal standards, while others transitioned to pass/fail or other more “flexible” approaches. Methods for taking attendance also varied, though most schools linked it to completion; students were marked present as long as they submitted assignments.

The trickiest metric to measure—but also the most interesting to district leaders—was student engagement. Seventeen districts reported tracking it in quantifiable terms. They had an average rate of 75 percent, though numbers ranged between 20 and 95 percent and varied based on classroom and grade level. District officials shared that it was difficult to determine whether low engagement was due to Covid-19-related barriers, such as limited internet access. Overall, engagement seemed to mirror in-person patterns; students who were highly engaged in-person were more likely to engage in distance learning.

The final priority for rural districts was maintaining community. Communication was vital, and districts used a variety of methods to connect with families, including school websites, Facebook Live check-ins, phone calls, social media posts, text messages, emails, home visits, postcards, and letters. Several districts got creative about how to maintain their usual programming in the age of social distancing, and hosted virtual field days, Zoom lunches, art shows, and open mic nights. There was also a consistent focus on celebrating graduating seniors.

The NCRERN staff were careful to note that these results should be interpreted with caution, as not all districts answered every question. The sample size was also relatively small. But the findings, which were published back in July, are still applicable today and don’t just pertain to rural districts. For instance, the report closes with some key questions that policymakers should consider for all districts, not just rural schools. They include how districts can identify effective ways to measure student attendance during distance or hybrid learning, and how schools can deliver the same quality of instruction to all students when some lack access to the internet or internet-enabled devices. Considering how many schools recently reopened using a virtual or hybrid model, these questions seem particularly important—and, unfortunately, remain unanswered.