Determining the factors that lead to kindergarten ability group placement 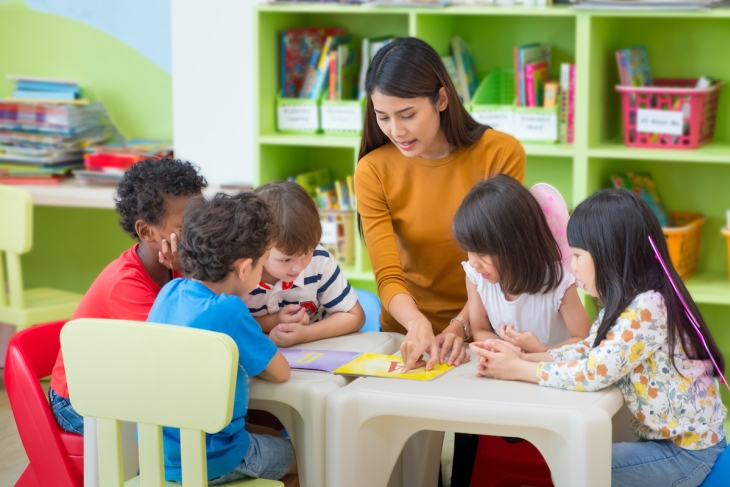 Ability grouping—arranging students in a classroom into smaller learning groups based on their aptitude in a given subject—is a common practice among teachers as early as kindergarten. It also tends to set a precedent for continued ability grouping in the later elementary grades and for tracking in middle and high school—a more determinative strategy that can affect a student’s future trajectory. Thus, it’s important to determine whether and how a child is placed in a particular kindergarten group. A recent study from University of Texas researchers Paul von Hippel and Ana Cañedo asks to what extent kindergarten ability group placement is predicted by children’s reading and math skills and the degree to which it may be biased by other factors, such as socioeconomic status (SES), race or ethnicity, and gender.

Data are gleaned from Early Childhood Longitudinal Study (ECLS) 2011 data, which was initiated in fall 2010 with a nationally representative sample of roughly 15,000 kindergarteners. Their teachers were asked whether they used ability groups in their classrooms and, if so, how many and which of the sampled children were in which groups. They were also asked about the kids’ behaviors in class, such as whether they had self-control or tended to argue or be impulsive. The researchers predicted ability group placement using a regression model with classroom fixed effects, which is important because teachers form ability groups by comparing kids in the same classroom. Since they had data for both the spring and fall of kindergarten, von Hippel and Cañedo predicted both initial group placement in the fall and examined changes in placement between fall and spring.

Their models predicted about half of the variance in placement, and by far the strongest predictor was standardized test scores, sourced from adaptive reading and math assessments taken in both fall and spring of the kindergarten year. The next strongest predictors were socioeconomic status, female gender, and Asian ethnicity, each of which predicted a 2- to 4-percentile boost in reading or math group placement. Specifically, Asian children were placed 4.2 percentile points higher than their scores alone would predict, while those from more advantaged backgrounds placed 2.5 percentile points higher. While those effects are fairly small, they are nontrivial, especially if the predictors are combined. For instance, an Asian female with high socioeconomic status would be placed 10–13 percentile points higher than her scores alone would predict. Whether a bias of that magnitude would bump students into a higher group depends on how many groups the teacher uses.

On average, Black and Hispanic children were not placed in lower groups compared to White children with similar test scores and the same socioeconomic status. Because they tended to have lower scores and lower SES, they were indeed placed in lower ability groups on average; but net of both those things, their race did not predict placement. They also found that around one-third of students changed groups between fall and spring. In reading, test score gains most predicted an upward move in placement, but net of those gains, SES was more informative than race or gender.

In looking at potential mechanisms, teacher reports on student behaviors helped to explain girls’ higher placements but not those of Asian-Americans or advantaged students. A second, related paper from the same authors looked into whether parental involvement—such as parents attending teacher conferences or communicating with teachers outside of conferences—helped to explain placement, and found that it did not.

The question of whether ability grouping is beneficial is not addressed in either study, but prior studies show mixed results, with some showing that it helps all students and others that it helps only the high achievers.

It is reassuring to see that Black and Hispanic children were not placed in lower kindergarten groups due to their race in this analysis, but what happens beyond kindergarten matters just as much. Other research shows that even when Black, Hispanic, and economically-disadvantaged children start kindergarten with the same skills—as seen here—they are still less likely to become proficient readers in future years than their White and wealthier peers. We must do more to make sure that all children finish the race together.