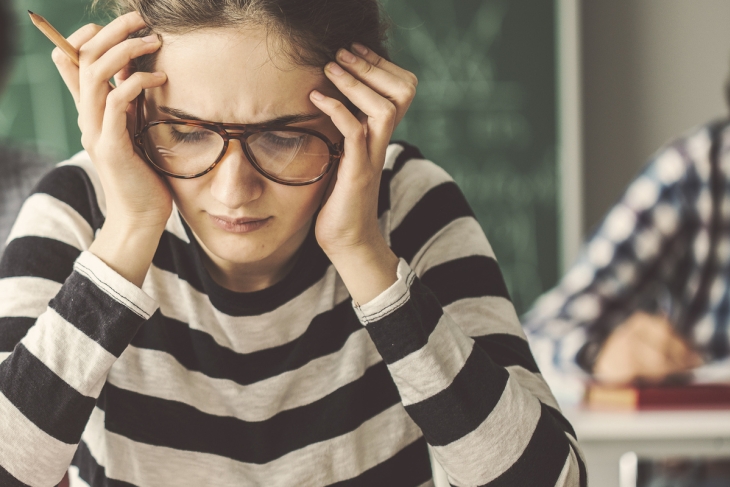 A student was arrested after an attempted stabbing at Montgomery Blair High School. That same district has seen forty-eight fights already this year, more than the entirety of the 2018–19 school year. Not an isolated incident, data from the National Association of School Resource Officers suggests that this trend of increased school disorder extends across the country.

Before the pandemic began and critical race theory took center stage, debates over school discipline dominated the discourse. These discussions began after then-President Barack Obama issued non-binding guidance for schools to avoid discipline disparities between Black and White students. In response, many districts curtailed their use. Discussions grew more heated after Trump rescinded the guidance in 2018 and the death of George Floyd pushed racial disparities to the forefront of American discourse. The pandemic put these policy debates on hold. But with students back in buildings—after eighteen months of who knows what—it’s time to begin them again.

The slogan “defund the police” has found its way to the bin, but a similar upheaval is going on in public education. Between 2012 to 2016, suspension rates for students across the nation dropped, and states like California have outright banned suspensions for low-level defiance. In their place, districts and administrations have often put SEL programs and restorative justice practices—an alternative system of consequences to typical punitive practices—to manage misbehavior. The causes of the increased disorder are near impossible to pin down, but removing suspensions as a policy is certainly not the proper response.

The research on the topic is murky. Most arguments against suspensions focus on two issues: their link to lowered academic performance and the disparate rates of punishment between Black and White students. From there, these effects lead to a higher likelihood of incarceration, thus contributing to the “school-to-prison-pipeline”—or so runs the argument.

Regarding the first contention, the bulk of research has only determined a correlational link between these two. In fact, when one working paper from the University of Arkansas attempted to isolate the causal relationship—comparing suspended students to “otherwise similar” students—they found a positive relationship between suspension and grades. Similar behaviors caused both poor grades and suspensions; suspensions did not cause poor grades. Shooting spitballs and whispering to classmates are bad for both grades and behavior records. The researchers still find other reasons to justify the reduction of suspensions but suggest that we “should not expect academic gains to follow.”

Regarding the disparate rates of punishment between Black and White students, it’s necessary to compare the effects of suspensions to the unintended consequences of their removal. If the side-effects are worse than the disease, we need to find another cure.

There are district-wide case studies that provide useful insight. Philadelphia rolled back their use of suspensions in 2012–13, and the findings from one academic review are concerning. Reading and math scores plummeted, truancy increased, and the occurrences of violent crime spiked. Ironically, students ended up spending more time suspended because they received fewer suspensions but for worse infractions, thereby garnering longer punishments. Similar results arose in New York and California.

Another study followed the results of quarterly achievement tests in both math and English and compared them to suspensions in the school. It concluded that suspensions improved math scores for non-suspended students. In a simple pro-con analysis, Amber Northern, senior vice president for research here at the Fordham Institute, summarized the results: “The aggregate positive effects of peer suspension on non-suspended peers could well be greater than the aggregate negative effects on suspended students.”

Perhaps these dismal showings only occur when suspensions are banned without replacement with another system. One randomized-controlled trial from the RAND Corporation stymies that contention. With the implementation of restorative justice practices, disparities in suspension rates did, in fact, drop. Alongside that, however, came an uptick in misbehavior, classroom disruption, and bullying. I’ve taught in such a building. Suspensions rates dropped, but only because teachers stopped reporting behavior. If anything, as the study implies, behavior worsened.

No person of good conscience who is familiar with America’s racial history is likely to be satisfied by observed disparities in suspensions. Even so, the existence of a problem does not itself justify any one solution. Thomas Sowell famously quipped that “there are no solutions, only trade-offs.” In this case, the trade-offs are dire. In seeking to solve one problem, we create a school environment in opposition to learning. In fact, these side-effects often disproportionately affect Black students. Returning to the opening counter-arguments, if lower academic performance and increased suspensions do lead to a “school-to-prison pipeline,” outright suspension bans seem like a policy to worsen that system.

Study after study has found that suspension bans often make the problems they are meant to solve worse, but that doesn’t mean there is nothing to be done. There are things to be learned from restorative practices, even if they are not adopted wholesale. Consider Michaela School in London, which has a reputation for being one of the strictest schools in England. Despite the use of punitive discipline, teachers meet with children after a consequence to have a restorative conversation. They adopt certain elements of restorative justice while also maintaining clear systems of behavioral expectations, consequences, and rewards. This conversation is not simply either-or. Doing both could be better than doing either in isolation.

Order, routine, authority, consequence: These are not dirty words, especially if you’ve experienced the alternatives. When we remove teacher authority from schools, some utopian sharing of power among teachers and students does not result.

Facing disparities, American schools certainly need some sort of disciplinary reform. Suspensions must be used judiciously and paired with instructional reform and student support. There is certainly a litany of alternative options, restorative justice being one. But until any prove effective, suspensions remain a necessary tool.