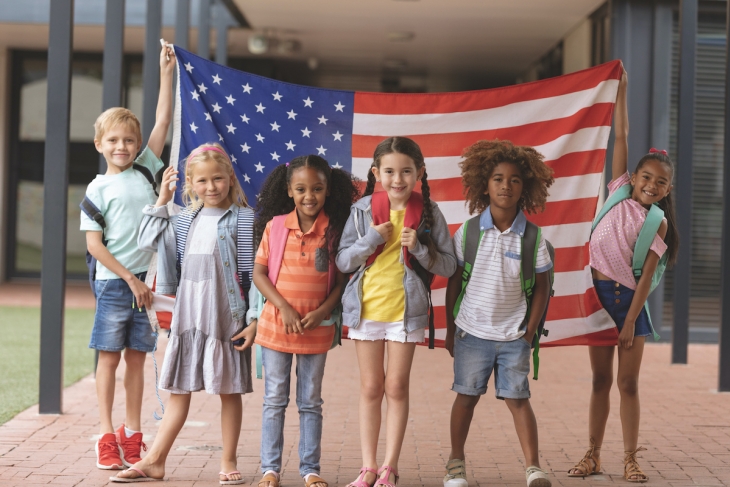 As of June, Fordham’s recent report on The State of State Civics and U.S. History Standards had received 15,881 page views, 107 media hits, and personal thank you notes or requests for additional guidance from officials in twenty states. Yet, despite this overwhelmingly positive reception, the report has attracted some criticism from both the left and the right.

That’s not terribly surprising. After all, we intentionally recruited a bipartisan team of external reviewers and advisors, and the politics of civics and U.S. history education are closely tied to the politics of—well, pretty much everything else.

So what did our critics find troubling? (And, since the need for civic discourse is a primary theme of the report, do any of them have a point?)

Criticism 1: The report’s vision for civics and U.S. history is insufficiently inclusive.

Overall, I’m happy to report that we’ve received very few complaints about our treatment of historically marginalized groups. Still, we failed to satisfy one of our external advisers for the report, iCivics’s Louise Dube, whose comments are among those included in the foreword. In her words:

The stories we tell should reflect the students we teach and be selected to help students understand today’s world. The report is not sufficiently explicit regarding these issues, and the evaluation criteria would have benefitted from the inclusion of specific criteria about whether racism, equity, inclusion, and diversity issues are adequately covered in state standards.

Clearly, this is an important criticism to consider. But the connotative challenges multiply as the list of weighty terms grows. For example, “equity” can be horizontal or vertical, race- or gender-specific, fiscal or rhetorical, and so forth. And of course, even if one achieves clarity on such fronts, there is the question of how much of whatever we’re talking about is “enough” in a country that will always be more diverse than its history.

Perhaps, in hindsight, we could have handled the need for a reasonably inclusive, diverse, and equitable history the way our civics criteria handle “freedom, justice, and equality”—that is, by recognizing that “these ideals mean different things to different people and are sometimes in tension with one another.” But if the goal is to define essential historical content, such a statement would provide little practical guidance. And in the current climate, it could be misinterpreted to mean that students of color needn’t learn about Thomas Jefferson or James Madison (which they should).

Hence our decision to be as specific as possible, since insisting that students know about Martin Luther King and the Ku Klux Klan leaves less room for misinterpretation than insisting on “equity.” But of course, taking this approach creates its own challenges, not the least of which is the sheer number of historically disadvantaged groups whose stories should arguably be included and must therefore be negotiated. For example, I do think the report should have been more explicit about the need for more LGBT history, which is still neglected in many places, including but not necessarily limited to the Lavender Scare, Stonewall, and Harvey Milk, as well as Lawrence v. Texas and Obergefell v. Hodges. But of course, not everyone will agree with that assessment.

This one also comes from one of our external advisers, Harvard’s Meira Levinson. In her words:

I don’t believe “the” American story exists, nor do I believe we should be teaching U.S. history as if there were one story (no matter how inclusive that story may be) rather than a cacophonous multiplicity of stories. This is not a postmodern claim. Rather, it is a claim that the United States, in all its gorgeous and ghastly complexity, has always had too much going on to capture in a single telling. In my opinion, it is a profound historical and civic mistake to teach children that they can master the story of our country. Americans should learn about some events, institutions, processes, phenomena, and people deeply, and through that deep inquiry, also learn that virtually everything we think we know about the U.S. is incomplete, and that one element of good citizenship is being curious about the stories, interpretations, and new discoveries of which we were formerly unaware.

At a philosophical level, there’s much to agree with here. And, per the foreword, there’s certainly a sense in which we’re searching for a unified storyline that’s neutral enough to satisfy left and right. But the pedagogical case for a “comprehensive” pass through U.S. history is grounded in the belief that “cultural literacy” is essential to citizenship and upward mobility. (There’s a strong link between the background knowledge students acquire in history and civics classes and reading comprehension, which is essential to most other forms of comprehension.) So, at least in principle, our insistence that standards start with “knowledge” of the essentials—things like the Constitutional Convention and the Civil War, plus a lot of other stuff that shouldn’t be controversial—is entirely consistent with a pedagogical approach that recognizes the incompleteness of our understanding, as well as the potential for bias and inaccuracy (even in widely accepted narratives). In other words, the report doesn’t take the view that what’s typically thought of as U.S. history is written in stone by an omniscient narrator, or that students shouldn’t have the opportunity to “go deep” on subjects that interest them.

In hindsight, perhaps we should have made those points more explicitly.

Criticism 3: The report does a disservice to the early grades (i.e., K–2).

In addition to our external advisers’ comments, we’ve also received feedback from other quarters. For example, in a recent column, education journalist Natalie Wexler accuses Fordham of embracing “baseless and harmful assumptions about what our youngest students are capable of learning” by endorsing “the same old superficial pap” for grades K–2, instead of insisting they be exposed to substantive civics and U.S. history from day one.

Like the other criticisms, this one contains a grain of truth. But let’s not forget that our reviewers pushed for “two full passes” through U.S. history and praised states that give kids an early start on content they can manage—in both history and civics. For example, we specifically praised Tennessee for its K–2 civics content and covering the slave trade in third grade.

Because so many states’ civics and U.S. history standards are indefensibly vague or unambitious, we felt that it was important to highlight the states that were doing the best job in these subjects. But it’s also true that even the best state standards could do better in the early grades. And in general, I suspect that our reviewers agree with Wexler about the limitations of “context-free lists of significant individuals” and the importance of including some real U.S. history in the early grades. In her words:

The K–2 years present a unique and currently wasted opportunity to introduce children not just to history but to knowledge of the world in general. At this stage school is still new and exciting, kids’ curiosity is insatiable, and they absorb information like sponges. But rather than enabling them to soak up rich content, we give them superficiality and abstractions—on the puzzling theory that they’re too young to understand stories about the past but well equipped to grasp abstract concepts like “symbols” and “chronology.”

In general, this strikes me as a fair critique of the K–2 standards I’ve had the misfortune of reading.

Criticism 4: The report engages in tactical advocacy for “action civics.”

Or at least, so says David Randall of the National Association of Scholars, in a deferential and perhaps over-lengthy critique.

According to Randall, action civics “generally consist of three overlapping practices”: group projects, internships, and political activism. Yet, as he surely knows, the words “group project” don’t appear in our report. Nor does the word “internship.” Nor do the words “political activism,” although the foreword I co-authored with Chester Finn, Jr. does include the following passage:

And now imagine that, in addition to taking courses in civics and U.S. history, every high school senior was also required to write a capstone paper on the historical background of a current social or political problem, the costs and benefits of potential solutions to it, and possible means of addressing it—for example, through legislation or advocacy.

To Randall, this is evidence that Fordham has gone soft. In his words:

We imagine rather that teacher bias will limit students’ options as to which advocacies they will be permitted to sketch in their capstone papers. But we need no exercise in speculation to know that the Hirschian Fordham Institute of old would have ascribed equal or greater value to a capstone paper that explored the best arguments for all sides of a conflicted current issue rather than advocating for just one, or which explored a historical issue rather than a contemporary one.

For the record, the need for students to explore “the best arguments for all sides of a conflicted issue” is more or less what Finn and I were getting at with “the costs and benefits of potential solutions.” But frankly, I’m more interested in the suggestion that twelfth grade students, after making at least two full passes through U.S. history and receiving a thorough grounding in the nuts and bolts of U.S. government, shouldn’t have the opportunity to apply the knowledge they’ve acquired to at least one current issue.

As a former civics teacher, I’m not sure how to respond to this claim except by noting that, after they graduate, high school students will be asked to form opinions on numerous deceptively complex problems, even as politicians and other actors tempt them with seductively simple solutions. To many people, this suggests the need for at least one practice round, so the kids can start cultivating the essential skills and dispositions outlined in our review criteria. Yet for Randall, the report’s occasional use of terms such as “effective citizenship” and “informed participation” is just further proof of our “tactical advocacy for action civics,” which is “also known by names such as civic engagement, community engagement, and project-based civics.”

Alas, there is nothing tactical about our desire to see students become effective citizens or participate informedly. Nor, one is tempted to add, is there much hope for our constitutional democracy if the assiduous weaponization of the English language has made even that a controversial proposition.