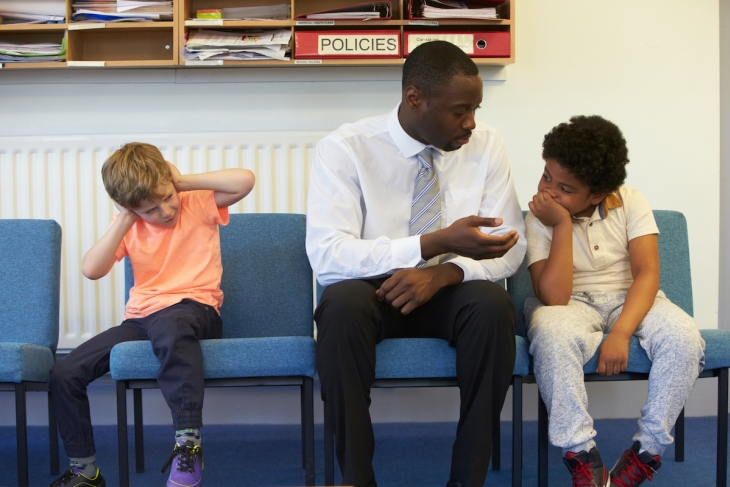 On June 4, the U.S. Department of Education’s Office for Civil Rights asked for information that would help it “support schools in addressing disparities and eliminating discrimination in school discipline and fostering positive and inclusive school climates,” suggesting that something resembling the Obama-era discipline guidance may be reinstated in the near future.

As the department’s RFI notes, “in 2017–18, Black students represented only 15 percent of the total student enrollment but accounted for 29 percent of all students referred to law enforcement—almost twice their share of overall student enrollment.” This disproportionality, it is assumed, is due mostly to racial bias. But what the RFI does not note is that 15 percent of Black students in grades 9–12 report having been involved in a physical fight on school property—almost twice the 8 percent rate reported by all students.

Similarly, the RFI mentions that Black students represent 36 percent of expulsions and 38 percent of students who received one or more out-of-school suspensions (OSS)—roughly two-and-a half times their share of overall student enrollment. However, it does not mention that principals of schools where minority enrollment exceeded 75 percent were four times as likely to report that “verbal abuse of teachers” was a weekly occurrence as those in schools where minority enrollment was less than 25 percent.

Balanced against this overwhelming evidence are one study that found that exposure to Black teachers reduces Black students’ odds of suspension, and several studies that find that Black students receive more severe punishments than White students who commit similar infractions. Yet the magnitude of these effects is small relative to disciplinary disparities. Thus, the primary explanation for those disparities—according to principals, teachers, and students themselves—seems to be differences in student behavior, which isn’t surprising given the risk factors that are correlated with student race.

What are the likely consequences of exclusionary discipline?

While numerous studies have linked exclusionary discipline to negative outcomes for students, most have relied on inherently problematic comparisons between students whose behavioral infractions were deemed suspension-worthy and “otherwise similar” students who weren’t suspended. Exceptions to this rule find smaller effects—at least for academic outcomes. Meanwhile, a substantial body of research suggests that disruptive students impose large costs on their peers, suggesting that suspensions have significant benefits for non-suspended peers’ academic achievement. For example, one recent study found that non-suspended students gained the equivalent of several days of math learning when a student in their class was suspended for a serious incident.

That finding is consistent with teachers’ views. For example, overwhelming majorities of teachers in Fordham’s discipline survey agreed that out-of-school suspension was useful for “removing disruptive students so that others can learn,” as well as “sending messages to parents about the seriousness of infractions” and encouraging both suspended students and their peers to follow the rules. Overall, only a quarter of teachers agreed that “the negative impacts of OSS outweighed any possible benefits.”

On strictly academic grounds, it’s likely that suspensions pencil out. But the elephant in the room is criminal justice involvement—an outcome where teachers may be no wiser than the rest of us. Here, again, causal evidence is hard to come by, but a recent study that uses changes in attendance zones to examine the effects of “strict” schools should give discipline hawks pause.

According to the researchers:

Like all the other numbers in the discipline debate, those numbers aren’t written in stone. But for the sake of argument, suppose that you could boost ninety-eight Black students’ achievement by the equivalent of one week—no wait, let’s make it a month—of learning, at the cost of sending two more Black boys to jail.

Would you make that trade?

If you’re not sure, my strong advice is to keep an open mind and not get too attached to the notion that suspensions are obviously good or bad.

What are the likely consequences of another unfunded discipline mandate?

The simplest way to eliminate racial disparities in school discipline is to equalize suspension rates or other forms of exclusionary discipline by fiat. Yet one study of the academic impact of banning suspensions for “willful defiance” in California found that the impact on math performance in grades four through seven was equivalent to moving from the 50th percentile to the 39th percentile. Similarly, a study of Philadelphia’s ban on OSS for disorderly behavior found that non-suspended peers’ math achievement and attendance declined in schools that didn’t—or perhaps couldn’t—fully implement the policy.

In theory, implementing “alternatives to suspension” such as restorative justice and Positive Behavior Interventions and Supports (PBIS) could reduce the costs disruptive students impose on non-suspended peers. Yet in reality, the only experimental evaluation of “restorative justice” found a negative effect on math achievement in majority-Black schools. And, in practice, the costs of mandating that students who misbehave remain in the classroom or school are probably larger than the costs of retaining them voluntarily (e.g., if a teacher’s authority is visibly undermined by his or her inability to impose meaningful consequences).

To be fair, there is some evidence that PBIS can improve school culture at the elementary level. Still, there’s no evidence that this is possible in higher grade levels, and the aforementioned results don’t necessarily generalize to elementary schools that are forced to reduce their suspension rates.

Notably, three quarters of teachers in Fordham’s discipline survey reported that “higher tolerance for misbehavior” was at least partly responsible for the decline in OSS at their school. Moreover, nearly one in five believed that underreporting was “mostly” or “completely” responsible for that decline—consistent with reports of widespread underreporting in Broward, Detroit, Louisville, Memphis, Philadelphia, and the District of Columbia. In another Fordham analysis, revisions to the Philadelphia school district’s code of conduct that limited suspensions for minor offenses were associated with an increase in racial disproportionality, in part because of a suspicious increase in more serious offenses.

How can we reduce racial disparities in discipline without imperiling disadvantaged students’ right to an education?

Corporal punishment should be banned. Suspensions for improper “grooming” or poor attendance have rightly been criticized. And there is a clear case for limiting the use of OSS for low-level infractions in the early grades, where research and common sense suggest the unintended consequences are manageable.

Still, as the grade level increases, the assumption that schools can handle whatever behavior students exhibit without imposing significant costs on other students becomes less tenable. Consequently, the safest approach to addressing concerns about criminal justice involvement in higher grades is to ensure that alternative environments within the school are a viable option for the chronically disruptive or violent students who need them.

Nationally, perhaps four-fifths of schools use in-school suspension (ISS), two in five use a “de-escalation room” where students can cool off before returning to class, and one-third have a more permanent alternative learning center (ALC) for persistently disruptive students. Yet the quality and capacity of these environments varies. For example, many Philadelphia teachers reported that lack of staffing and space were key barriers to the implementation of its reforms, with the result that many teachers continued to rely on OSS.

Given the attendance challenges low-income students have faced during Covid-19, ensuring that schools with high-suspension rates have the resources to keep more students in the school building voluntarily would be a logical use of the $189 billion in additional funding that schools received in Elementary and Secondary Schools Emergency Relief (ESSER). But even in normal circumstances, implying that educators are racially biased is a poor substitute for giving them the resources they need to serve students effectively.

That, of course, is a much heavier lift, which is what makes the whole debate so frustrating, circular—and a bit repetitive.