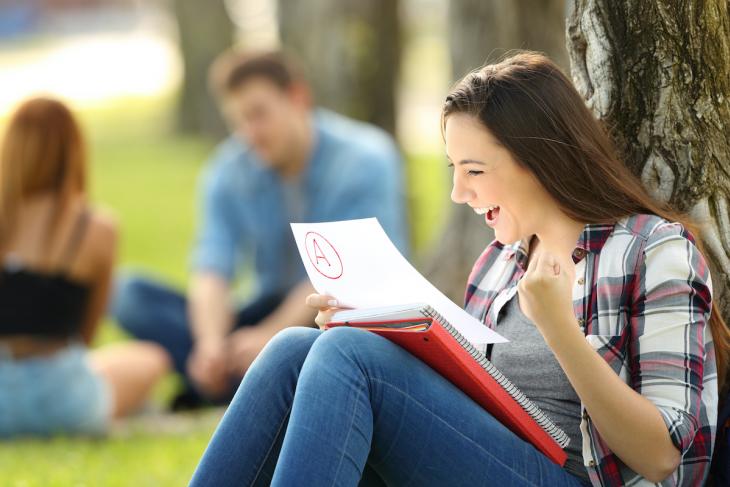 Kids hear all the time that working hard and earning A’s and B’s in school will open opportunities for them later in life. Families rely on those grades to tell them whether their kids are getting what they need out of school to become happy, successful adults. In fact, they trust report card grades more than standardized test scores or any other indicator of their kids’ progress. Unfortunately, for millions of families, report card grades are deeply misleading—offering false confidence that their children are well-prepared for their futures when they’re not.

Earlier this month, the Fordham Institute released a study that further confirmed this scandal that’s hiding in plain sight in almost every school in the country. The study found huge variation in grading standards among Algebra 1 teachers in North Carolina—meaning that an A or a B might reflect very different levels of mastery from classroom to classroom. Grading standards depended not on policy, but on factors like the teacher’s experience level, the selectivity of the college they attended, and even their gender. Crucially, these different grading standards had a significant impact on students: According to the study, students learned more from teachers with higher grading standards, and those gains persisted up to two years later.

The study also found that high grading standards were not distributed randomly, but are a product of the same pernicious inequities that dictate how critical resources like talent, funding, and access to excellent instruction are provided. Suburban schools and schools serving more affluent students were far more likely to have high grading standards.

This fits with what we at TNTP have found in our own research, and what we see in classrooms every day. In The Opportunity Myth, we found that out of students who earned B’s—widely considered to be a good grade—only 35 percent were at grade level on state reading and math tests, and just half met the benchmark for college readiness on the ACT or SAT.

More disturbingly, we found evidence that the same grade can have very different meanings depending on a student’s race, a factor not analyzed in the Fordham report—to the point where black students who earned A’s were only about as well-prepared as white students who earned C’s. When schools grade students of color at a lower standard than their whiter or more affluent classmates, they’re simultaneously denying them opportunity and lying to them.

These discrepancies stemmed not just from low grading standards on challenging work, but from a lack of opportunities to even attempt grade-appropriate assignments in the first place. Earning a “legitimate” A or a B based on fifth-grade work says little about a student’s readiness for high school, college, or beyond if they’re in eighth grade—yet most of the students we studied spent most of their time doing work far below their grade level. This helps explain the unconscionable dynamic where national high school graduation rate has climbed past 80 percent, but 40 percent of those who enroll in college are still shunted into remedial classes—racking up a combined $1.5 billion in extra debt to learn skills their report card grades told them they’d already mastered.

Transparency is the critical first step to ending this widespread grading scandal. Schools need to stop misleading families and be clearer with them about what grades really mean. Parents see an A or B on a report card and understandably assume that their student is on track. But if that’s not the case, whether it’s due to low grading standards, non-academic factors in a grade, or something else, schools should make that clear. Grades can certainly measure more than academic mastery—a student’s attendance, class participation, or contributions to school culture could all reasonably factor in—but students and families need to know exactly what they mean, and the extent to which they capture academic readiness.

This isn’t a step we can fairly expect individual teachers, school leaders, or even school districts to take on their own. In a world where low grading standards dominate, those who apply higher standards will face enormous pressure from students, parents, and supervisors to just give the grades that make everyone happy in the short run but obscure the inadequate education too many students receive.

Changing those incentives will likely require action at the state level. For example, states could require schools to publish both the grading standards all teachers are held to and the connection (or lack thereof) between grades and academic proficiency. If a student received a B in Algebra I, they would see on their report card the percentage of B students at their school who scored proficient on the Algebra I state exam. This “grade guarantee” summary would help students and families better understand report cards. It would also create an incentive for school systems to adopt high grading standards—and ensure students meet them.

Thanks to the Fordham Institute for shining a light on this continuing scandal and helping to spur action to address it.

Daniel Weisberg is the CEO of TNTP.