How Americans Would Slim Down Public Education

Education budgets are tight and state and district leaders must make tough decisions about where and how to save. But is the public willing to accept cuts? Which ones? Where? According to the results of this pathbreaking survey, many Americans support dramatic changes to how school districts do business. From cutting central-office staff to reforming retirement benefits, this report outlines how voters think spending should be reduced—and what programs must be protected. What exactly did the authors find?

The public grasps the severity of the situation

Sixty-two percent of respondents described their local district’s current financial situation as very or somewhat difficult, with 77 percent of these individuals reporting that the financial challenges will last for quite a while.

Almost half of respondents (48 percent) said that, if their own district were facing a serious budget deficit, the best approach would be “to cut costs by dramatically changing how it does business.”

Reformers have their work cut out for them

While the public is amenable to change, many of education reformers’ pet proposals face skepticism, particularly reducing non-teaching staff and tapping the potential of digital learning.

Not all cuts are equally popular

What policies had the most public support? 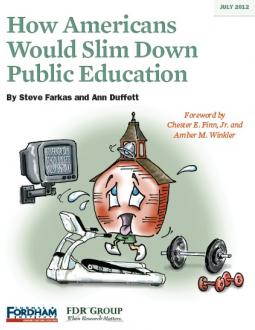 Steve Farkas is the President of Farkas Duffett Research Group. Prior to co-founding the FDR Group, Steve was Director of Research at Public Agenda, a nonprofit and nonpartisan think tank, from 1992 to 2004. Originally planning a career in political consulting, he began with a short stint as a Senior Research Analyst at Penn & Schoen, Inc., in 1990.Steve is the principal author of over 100 major opinion studies on a…

Co-founder and partner of the FDR Group, Ann Duffett has been conducting public opinion research since 1994. Ann's career in survey research began at Louis Harris and Associates (currently known as Harris Interactive). As a key member of Harris's public policy research team, she conducted both public and proprietary opinion research on health care, public education, women's issues, and youth violence. As Senior Vice… 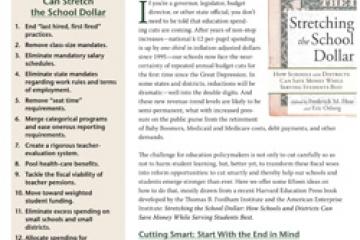 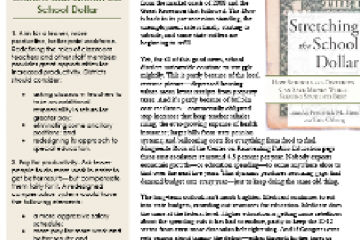 How School Districts Can Stretch the School Dollar 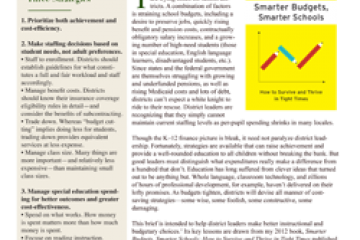