Beyond the Basics: Achieving a Liberal Education for All Children

The United States is not going to compete with the rest of the world in terms of cheap labor or cheap raw materials. If we are going to compete productively with the rest of the world, it's going to be in terms of creativity and innovation. America has always had a capacity for hard work and stamina, but those qualities of creativity and ingenuity are not being nurtured and fostered by our current educational system.

- Dana Gioia, Chairman of the National Endowment for the Arts

History offers many explanations for why people should acquire a broad, liberal-arts education. Prominent thinkers and leaders over the centuries have expounded on the virtues of such learning. Aristotle said liberal education is necessary if one is to act "nobly." Franklin said it was needed to cultivate "the best capacities" in humans. And Einstein found in liberal learning the locus for imagination.

In the era of No Child Left Behind, however, liberal learning is on the defensive. Federal law mandates academic gains only in reading and math, and its sanctions and interventions are triggered only by failure to make gains in those two areas. States, school districts and individual educators have understandably responded by ramping up the time spent teaching those two sets of core skills and prepping students to take tests in them, to the detriment of "broad" and "liberal" and "arts."

Recent months have brought yet another challenge to liberal learning, as well-meaning business leaders and policy makers, rightly concerned about American competitiveness, are pushing "STEM" (Science, Technology, Engineering, and Mathematics) training. Yet America's true competitive edge over the long haul is not its technical prowess but its creativity, its imagination, its inventiveness. And those attributes are best inculcated not by skill-drill but through liberal arts and sciences, liberally defined.

This volume argues that case. It emerges from a Fordham-sponsored conference in December 2006 (underwritten by the Carnegie Corporation of New York and the Louis Calder Foundation). It develops the rationale for liberal education in the primary and secondary grades, explores what policymakers and educators at all levels can to do sustain liberal learning, and sketches an unlovely future if we fail. 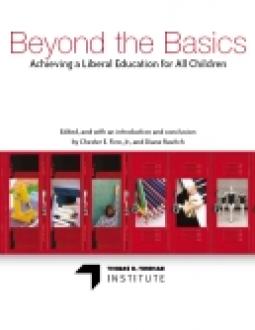 Diane Ravitch is Research Professor at New York University and a Non-Resident Senior Fellow at the Brookings Institution in Washington, D.C.