Too many pension systems are inequitable to new and future teachers 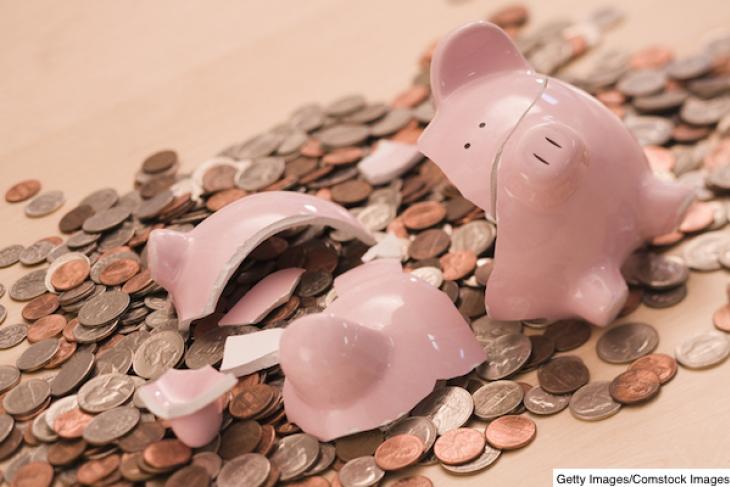 For years, intrepid number crunchers—finance experts, economists, and pension analysts among them—have been trying, with little success, to prompt state policymakers to take action on reforming public pensions for teachers. Their efforts have included jaw-dropping numbers (Liabilities total trillions of dollars!), catastrophic predictions (Districts will go bankrupt! Taxpayers will be on the hook for decades!), dire real-world consequences for both employees and students (Teachers will lose their jobs! Class sizes will balloon! Instruction will suffer!), and alarming appeals for equity (We’re denying new teachers a secure retirement!).

If only these warnings were exaggerated scare tactics. But they’re very real. Consider these examples from 2016 alone: Pennsylvania taxpayers paid over $4 billion to bail out the Keystone State’s teacher pension fund in the 2015–16 fiscal year, even as a major pension-reform bill failed to clear the state legislature. Detroit Public Schools owes the state of Michigan $138.5 million in back pension payments and is accruing what amounts to $33,560 per day in late fees and interest; just servicing this debt costs the district $1,394 per student. In Chicago, the dispute over not increasing teacher salaries because the funds were needed to pay for pensions became so heated that teachers nearly went on strike.

Which makes it all the more tragic that most policymakers—and the public—have responded to the public pension crisis with little more than a shrug. Sometimes this response is simply short-sighted: “Yes, it’s a problem and something should be done, but we have more pressing issues to deal with.” Other times it’s about avoidance: “This issue is so complicated and calamitous that we’re going to bury our heads in the sand. Those who come after us will have to cope.” And too often, it’s fearful: “If we take this on, we’ll face backlash from the unions, the teachers, and much of the public.”

At one level, these reactions are completely understandable. Why take on a complex, costly issue that brings no short-term political gain and is sure to enrage many constituents?

The reason is that the public pension crisis is already having a negative effect on real people, and it will keep getting worse. The most conspicuous victims are new teachers, people eager to enter a profession where they can make a difference for kids. The bargain used to be that a new teacher would receive mediocre pay but could count on a comfortable retirement. Now most new teachers can expect mediocre pay and lousy benefits. Yet many of those new teachers are unaware that the job they’ve dreamed about doesn’t fulfill its part of the bargain. They will pay a portion of those mediocre wages into a pension system, and for most, that system will later fail to provide them with any actual net benefit. What they receive in retirement will be worth less than what they put into the system while they were in the classroom.

In a new report, (No) Money in the Bank: Which Retirement Systems Penalize New Teachers?, we calculate and document that harsh reality. We ask specifically: How long must a new teacher remain in the same retirement system until the value of her benefits exceed the value of her contributions? We use the term “crossover point” to describe the time when that happens.

To tackle this complicated set of calculations, we recruited Martin Lueken, Director of Fiscal Policy and Analysis at the Friedman Foundation for Educational Choice (EdChoice). He has worked extensively at the intersection of education policy and economics, and his research, writing, and expertise on teacher pensions are respected across the field. Dr. Lueken examined the timing of the crossover point for a new teacher in the largest public school district in each state plus the District of Columbia. These fifty-one districts employ approximately 11 percent of U.S. teachers.

What is distinctive about his analysis is that all calculations are based on real data. He uses retirement plan parameters (e.g., contribution rates and assumed rate of return) drawn from actual plan documents, and current teacher salaries pulled from actual district salary schedules and collective bargaining agreements. In other words, these aren’t hypothetical scenarios; they represent reality for incoming teachers in these districts. The picture that emerges isn’t pretty. The median crossover point of the fifty-one districts is twenty-five years. That means teachers in more than half of these districts will wait two-and-a-half decades before their retirement benefits are worth more than what they’ve put in themselves. For the thirty-nine traditional defined benefit (DB) plans, the median is twenty-seven years. Only five DB plans have a crossover point of fewer than twenty years—which means that, in the thirty-four other districts with DB plans, nearly three in four teachers will leave the profession before they reach the crossover point. Or phrased another way: Since the average experience of a teacher who leaves the profession is fifteen years—and fewer than one out of four stays more than twenty years—many teachers will never see a true “benefit” from their benefits.

That’s the case in Chicago (IL), Boston (MA), and Anoka-Hennepin (MN) where teachers will never reach a crossover point. Although they contribute 7.5 to 11 percent of their earnings to the pension system, their pension wealth will never be worth more than their cumulative contributions—no matter how long they stay.

It’s not unfair to say that these systems now treat new teachers as sources of revenue for other people’s pensions rather than valued employees in their own right. One study, for instance, finds that, “on average across state plans, over 10 percent of current teachers’ earnings are being set aside to pay for previously accrued pension liabilities.”

On the other hand, by definition and design, the crossover point for all six defined contribution (DC) plans is zero years: under these 401(k)-style plans, a teacher’s total retirement benefits are always worth more than her own cumulative contributions into the system—that’s because the contributions of her employer, plus investment earnings on both, are also included. Teachers in Anchorage (AK), Miami-Dade County (FL), Detroit (MI), Columbus (OH), Greenville County (SC), and Alpine (UT) are covered by DC plans. (Alaska is the only state in which the DC plan is the only option; the others also have either DB or hybrid plans that teachers can choose.)

For teachers in the six hybrid plans analyzed, the median crossover point is ten years. Five districts have the hybrid plan as the only option: Portland (OR), Shelby County (TN), Providence (RI), Fairfax County (VA), and Indianapolis (IN). The sixth district is Seattle (WA), where teachers can choose between a DB and a hybrid plan. Teachers in Shelby County and Portland will reach a crossover point after just five years; teachers in Indianapolis, Providence, and Seattle reach it after ten years; Fairfax County teachers must wait twenty-three years.

So what should states, who sponsor these plans, do about this woeful state of affairs? The best recommendations aren’t always new—but they’re prudent. Dr. Lueken offers three: First, add a DC or other portable account-based plan (which would not defer compensation for new teachers) and allow teachers to choose which plan best meets their needs and circumstances. Second, make the more portable option the default plan. And third, increase wages and reduce benefits, since many new teachers prioritize higher salaries over deferred compensation. 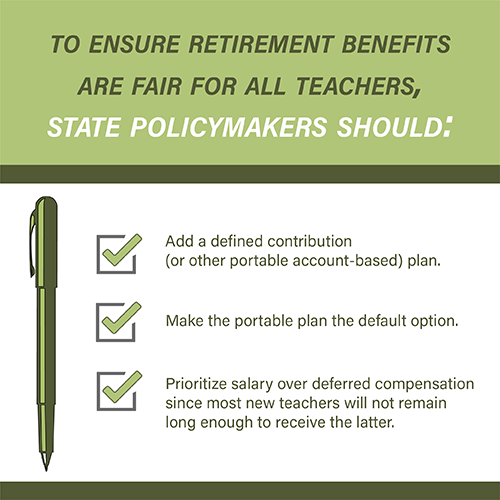 Some states are already doing some of these things—but not nearly enough.

For a nation that places great emphasis on equity, it is astonishing that so many states now tacitly endorse pension systems that are inequitable to current and future generations of new teachers. All of which is even more egregious since DC options have been found to increase the retention rate of new teachers while eliminating the penalty that veterans face if they work past the year that their DB pension wealth peaks. Shrugging our shoulders helped get us into this mess. Now let’s stand straight and quit political posturing as we approach pension reform in 2017.