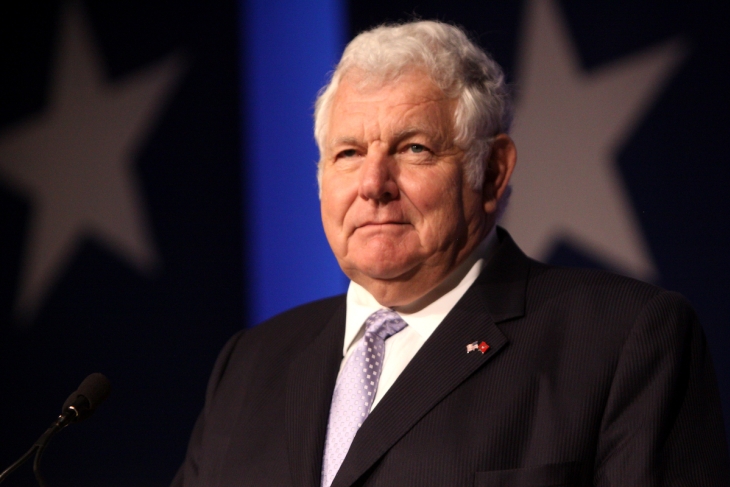 It’s poignant to read the mainstream media fanfare and reviews that greeted William J. Bennett’s The Book of Virtues when it was published in 1993, and to reflect on the America that made the book an unlikely cultural phenomenon: 3 million copies sold, spin-off books for young children, even a cartoon series on PBS, which ran for nearly five years.

A few months after it took off, Newsweek put Bennett on its cover along with Peggy Noonan and Hillary Clinton (!), a trio of haloed and white-robed “virtuecrats” fighting America’s moral decline. Stifling a smirk, writer Howard Fineman dubbed Bennett a one-man “cottage industry of character education—a multimedia McGuffey,” yet the magazine’s own polling forced him to concede that Bennett was on to something: More than three-quarters of Americans (76 percent) agreed that “the United States is in moral and spiritual decline.” The fraying of the nation’s social fabric could no longer be dismissed as merely “the crotchety preoccupation of the cultural right.” So undeniable was the appeal of Bennett’s character campaign that Fineman predicted the rise of “a new kind of politics that could dominate the decade if economic or foreign crises don’t intervene.” A year later, Monica Lewinsky began her White House internship.

Bennett the virtuecrat never launched the presidential bid that Newsweek and so many others assumed he would. Eventually, the nation that kept The Book of Virtues number two on the New York Times best-seller list for eighty-eight weeks would choose a president whose lack of the virtues Bennett extolled—self-discipline, honesty, and responsibility—were less a political liability than a personal brand. The nation still awaits the rise of a virtuous political class.

Likewise, it’s hard not to be wistful perusing the newly-published thirtieth anniversary edition of The Book of Virtues. My memory betrayed me in revisiting the anthology for the first time in decades; I recalled, incorrectly, that it was written for young people. Organized by individual character traits—compassion, friendship, faith, and so on—each chapter starts with nursery rhymes and light verse, suitable for reading aloud to children. But the anthology’s selections grow longer, richer, and more challenging from the beginning to the end of each chapter: Plato on self-discipline from “Gorgias”; an 1852 speech by Frederick Douglas holding America accountable for the sin of slavery; the Agincourt speech from Shakespeare’s “Henry V.” The meatier fare invites quiet, contemplative reading after the kids are in bed. It’s a moral primer, but it’s not homework. Entries include items on the high school basketball team memorialized in the movie Hoosiers and the “Thrilla in Manila” heavyweight title fight between Joe Frazier and Muhammad Ali. One delightful entry in the chapter on courage is also the anthology’s shortest: an advertisement placed in London newspapers by Ernest Shackleton in 1900 seeking volunteers for his Antarctic expedition, which read, in full:

Honor and recognition in case of success.

Nearly one-third of the selections in the thirtieth anniversary edition are new, including entries about Mother Teresa, Jaime Escalante, and Navy Seal Michael Murphy, a posthumous Medal of Honor recipient who died saving his comrades in Afghanistan. No thought was given to updating the list of virtues themselves, however. “You know, people are honest or they are not. They believe in the value of work or they don’t,” Bennett remarked when I spoke with him recently. “C.S. Lewis said you could no more invent a new virtue than a new color.”

True, but some are more in season than others. Bennett took rueful note of changing attitudes about work, one of the book’s ten virtues, and the millions of American men in their prime years who are forgoing meaningful work, their lives consumed by screen time and, in too many cases, opioid abuse. “The person who has missed the pleasures of work, of a job well done, has missed one of the great pleasures of life. Hard work can be done by people on the left or on the right,” Bennett said, noting that, even thirty years ago, some critics carped that he had produced a book of conservative virtues. “There was a book of liberal virtues,” he said. “It didn’t sell.”

The 1990s were no less obsessed with “multiculturalism” than readers today are with “identity.” Both the original Book of Virtues and the revised edition stand up well to the demands of diversity, with entries by and about Martin Luther King Jr., Harriet Tubman, James Baldwin, and others, and folktales from many traditions. This will likely not be sufficient to appease present-day readers less concerned with which authors are included than with which ones are cancelled and purged. Perhaps Bennett and his wife and co-editor Elayne might yet be persuaded to add one more virtue in future editions: tolerance.

Bennett’s anthology pairs nicely with E. D. Hirsch, Jr.’s Cultural Literacy, another out-of-nowhere phenomenon of the 1990s, which preceded it by a few years. Bennett, the conservative secretary of education under Ronald Reagan, was an early and enthusiastic proponent of Hirsch, the liberal English professor from the University of Virginia. Each man saw the timeless appeals of these tales and figures to advance their projects. For Bennett, stories drawn from the Bible, Greek mythology, fairytales, oft-recited poems, and episodes from American history cultivated character. For Hirsch, they were essential components of the common store of background knowledge, allusions, and idioms on which reading comprehension depends.

Our political divide and the partisan media ecosystem that feeds it makes its unlikely, alas, that an anthology edited by a prominent conservative intellectual can win even a fraction of the attention that greeted the original volume. “Look at the blurbs on the back cover,” Bennett said, referring to laudatory pull quotes from Time, Newsweek, the Washington Post, and People, praising the original Book of Virtues. “I don’t think I’d get those today,” he conceded, though the evidence of moral decline that so fussed the editors of Newsweek thirty years ago is no less compelling today. “Trust in institutions was down, people were worried about schools and family formation,” Bennett observed. “Those are even bigger concerns now.”

Editor’s note: This was first published in the Manhattan Institute’s City Journal.