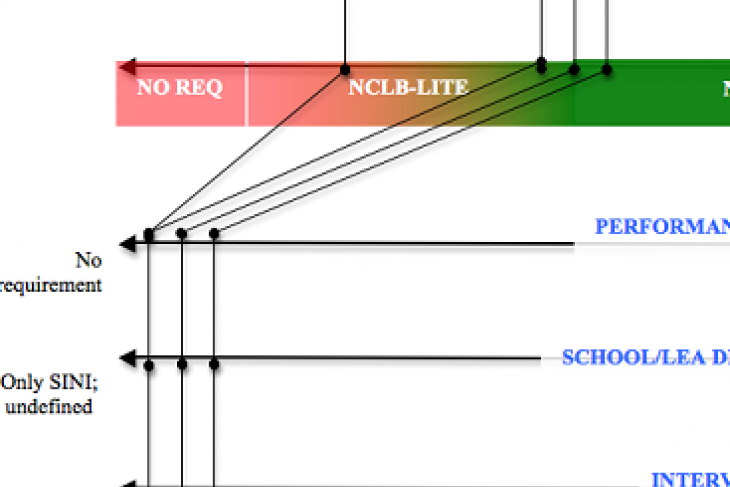 Here I used it to show how eleven major ESEA reauthorization proposals address the other dimensions (remember, minimum federal accountability is on the left; maximum on the right). The total picture is as confusing as subway map. 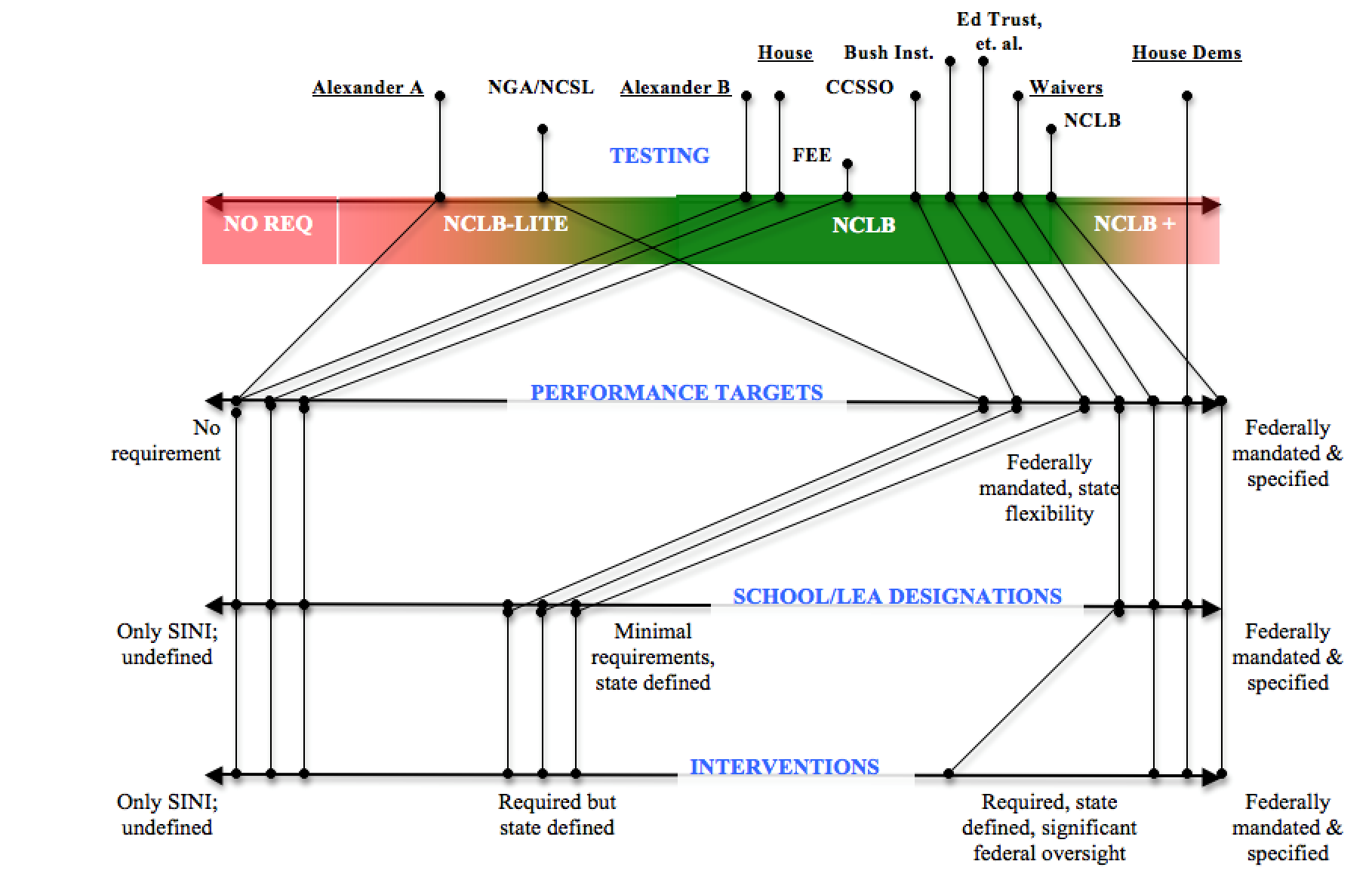 But when broken down, the graphic reveals three distinct approaches, one of which offers the best chance at reauthorization.

Several proposals that appeared in the testing-alone graphic do not appear here because they didn’t take clear positions on the dimensions beyond testing. Of those remaining, four embrace what I call Federal Prescription. Their underlying logic is: If we want states, districts, and schools to get better results, the feds must tell them what to do.

NCLB is current law and represents the most expansive federal role on the table. It mandates and specifies performance targets (100 percent proficiency, Adequate Yearly Progress, etc.); creates mandatory, specified performance categories (“in need of improvement,” “restructuring,” etc.); and spells out the activities required for struggling schools. 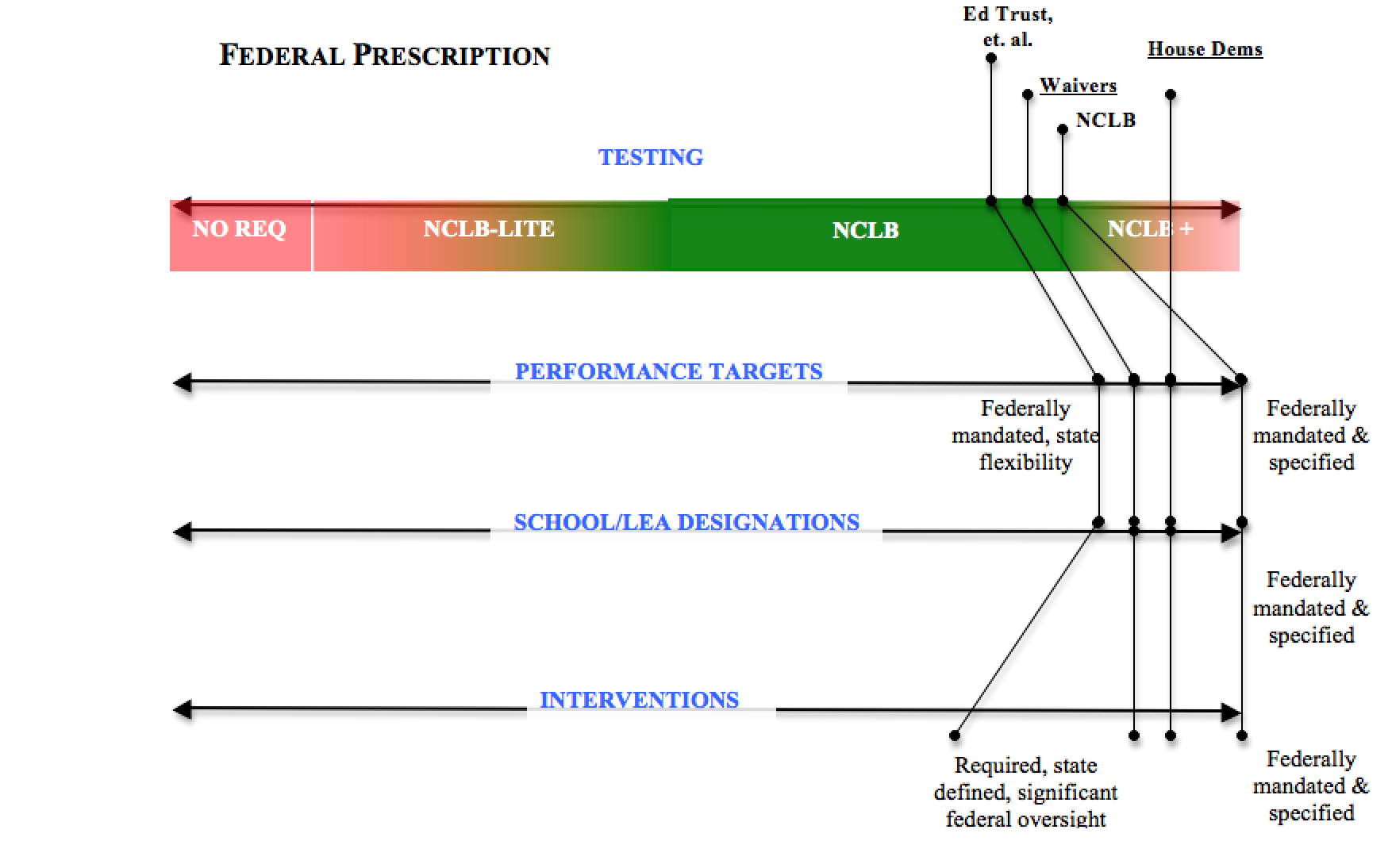 The plan offered by House Democrats was similar. It would’ve required states to set performance targets for all students. States would’ve been required to identify “schools in need of support” and “high-priority schools,” and the interventions for both would’ve been prescribed. Although the waivers provided more flexibility, states still had to develop an array of targets; identify (federally defined) priority, focus, and reward schools; and follow a prescribed set of interventions.

The Ed Trust proposal would also require achievement targets for districts, schools, and student subgroups. It would require state accountability systems to designate schools and districts based on their performance against these targets (so there would be a bit more flexibility than NCLB or waivers). It would give states considerably more leeway over interventions, but the federal government would still play a prominent role: the education secretary would approve state plans, enforce implementation, and “take action” if goals weren’t met.

On the other end of the spectra are the plans that believe the federal government should make information publicly available and then hand back everything else to the states. This is federal accountability through transparency. 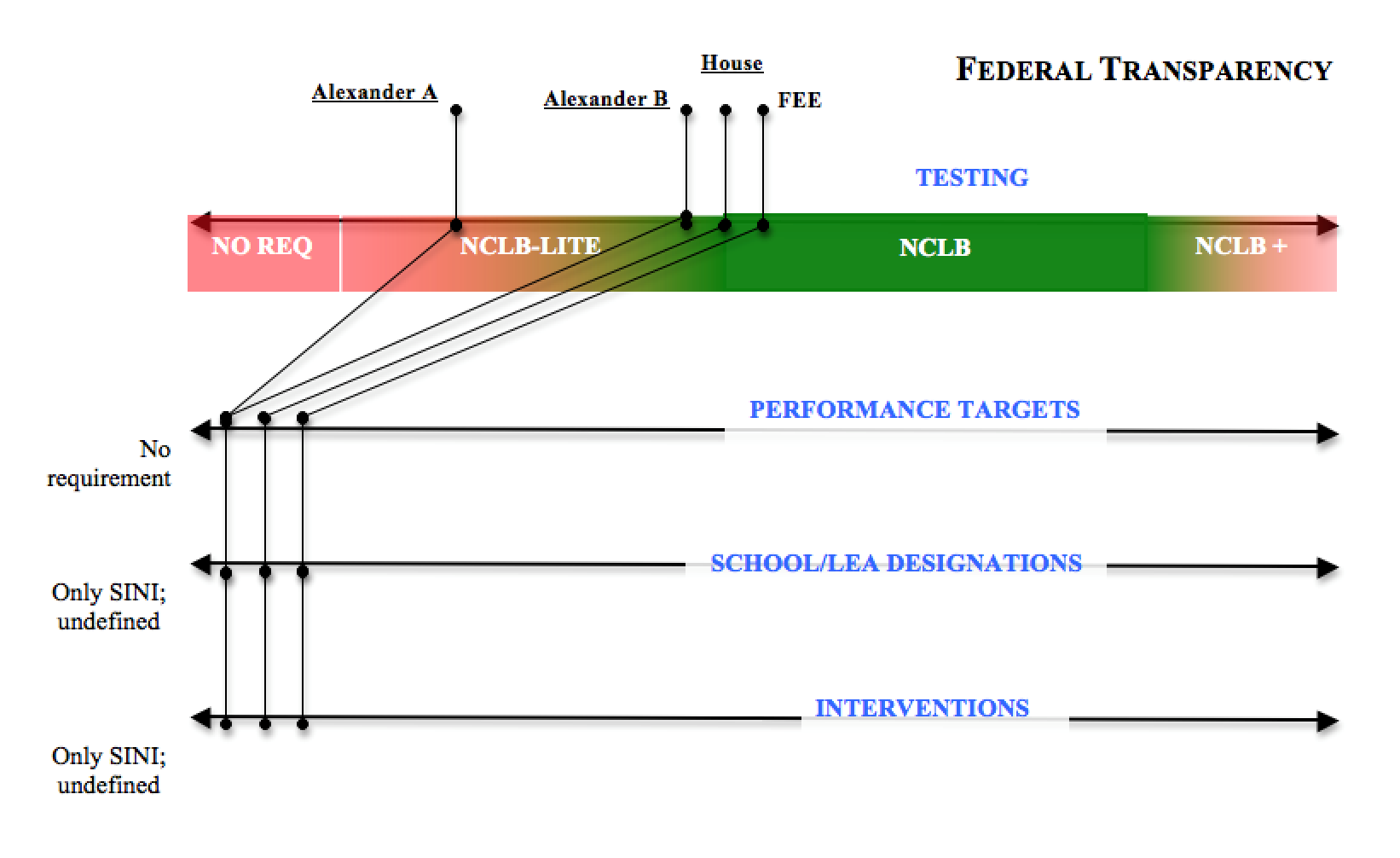 Though Alexander “A” and “B” differ on testing, they are the same in the other aspects. The language has no requirements for performance targets. States would have to identify schools needing improvement, but there are no requirements for how those schools would be identified or how many there would be—and there are no other required categories. The education secretary would be prohibited from influencing these decisions. States would have to do something with struggling schools, but such decisions would be theirs alone.

The House bill also requires no performance targets and allows states to make all intervention decisions. It requires only one category of schools. Politics K-12 wrote, “It pretty much lets states do what they want on accountability.”

The Foundation for Excellence in Education proposal is very similar. It doesn’t mention performance targets. It has no requirement for designations (it supports allowing states to categorize), though it implies that states would designate some low-performing schools. States would have full control over interventions. It would prohibit the education secretary from influencing accountability systems.

The best chance for ESEA reauthorization can be found in the approach taken by the nation’s governors, legislatures, and state superintendents. Their proposals, which I have labeled Accountability for Results, hew to one of the key principles of management and leadership—and the heart of the charter school bargain: Set clear goals and give people the freedom to reach them.

States would set performance targets but then have wide latitude in designing school categories and interventions. In other words, tight on ends, loose on means. 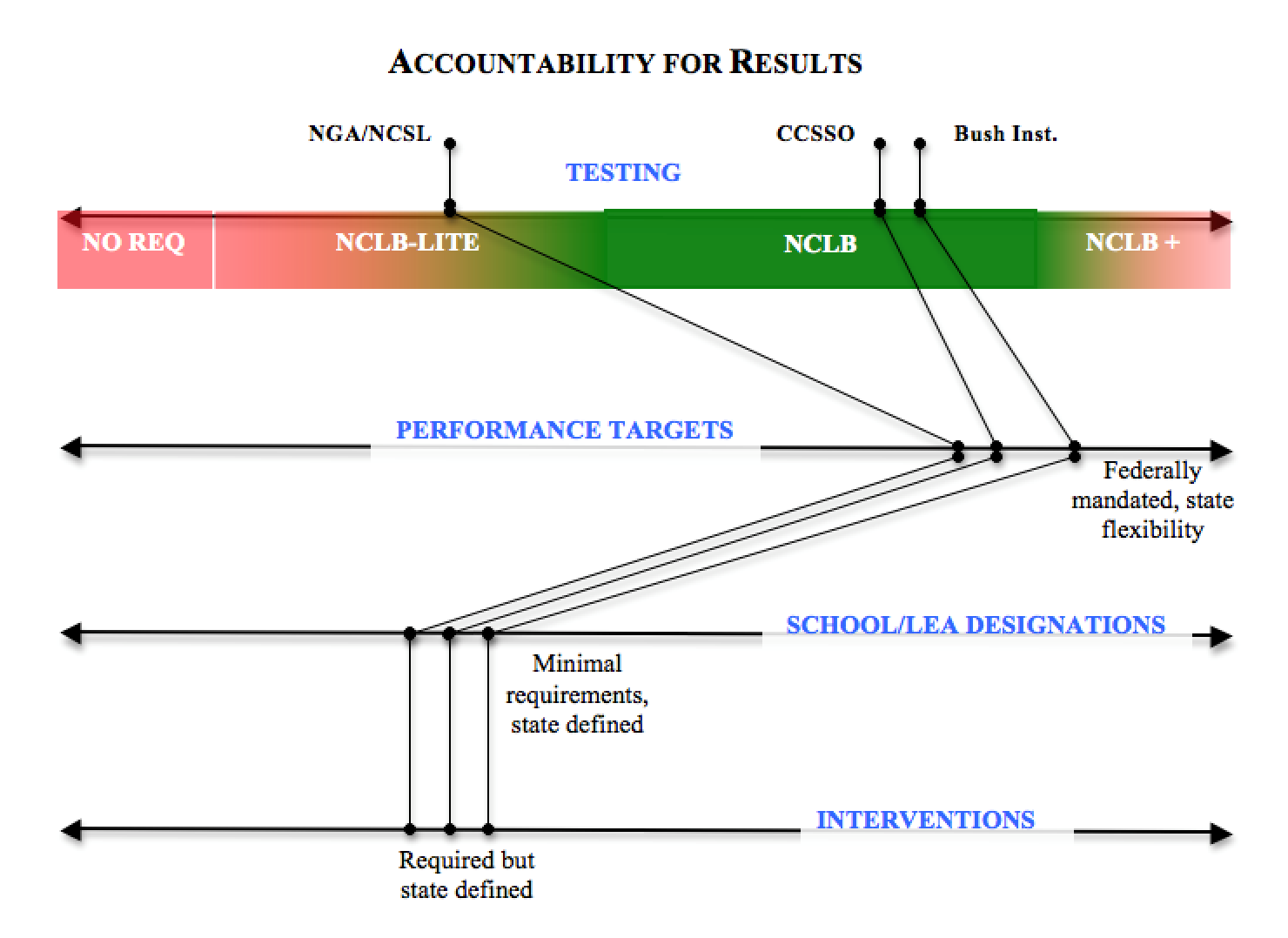 The Bush Institute recommends the same approach. It would require statewide and gap-closing goals that are then translated into performance targets for districts, schools, and student subgroups. It would require designations related to reaching and not reaching targets. Interventions would be required, but the details would be up to the states.

It’s essential to underscore that the very state leaders who will be responsible for leading the post-NCLB era are the ones recommending Accountability for Results. Moreover, this compromise keeps faith with those demanding we give K–12 authority back to the states and those demanding we continue protecting disadvantaged kids. It would merely require the Right to agree to include explicit performance targets and the Left to agree to give states greater flexibility in tackling challenges.

Important details would still need to be worked out (e.g., the role of the education secretary in approving state plans, the consequences for a state’s failure to improve results).

But state leaders may have shown us the path to reauthorization.