Science class is a great place for social and emotional learning 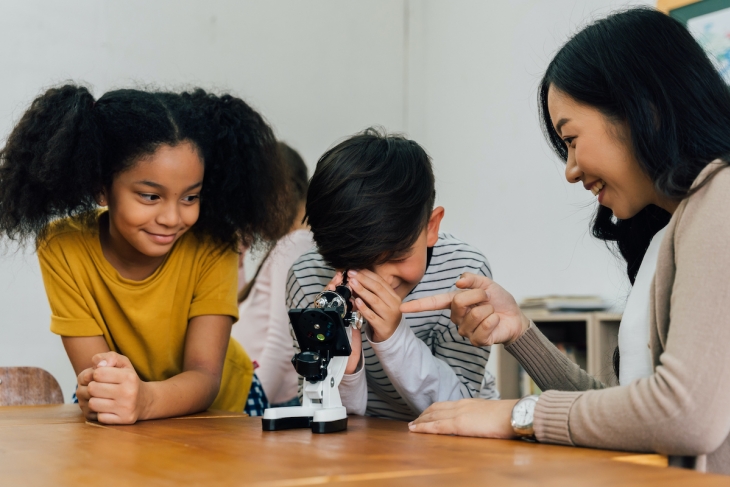 We don’t usually picture science class when we think of social and emotional learning (SEL) or whatever we decide to call it, perhaps because scientists and engineers, unlike artists and writers, are often depicted as socially awkward or emotionally cold in popular media. But as a former physics teacher, I know that science classrooms are one of the best places for students to develop the social and emotional skills their parents care about most.

Take problem-solving, which was a large component of my physics classes. To solve problems effectively—whether they are traditional “paper” problems, real-world data-gathering exercises that required the use of lab equipment, or design challenges such as the infamous egg drop—students must develop a variety of analytic and technical skills, but emotional skills play a key role, too. Those skills include handling challenges and setbacks in a positive way, believing in one’s ability to master skills and content, and setting goals and then working toward them.

The cyclical method of trial and revision common to scientific inquiry requires students master certain emotional skills. In my classroom, students practiced slowing down in order to develop problem-solving strategies, reflecting on results in the context of broader knowledge, and revising their thinking when necessary. For the aforementioned egg drop, a student might develop her design around ideas about momentum and energy, test her design through several trials, and revise her design based on the test results.

Thus, to succeed in my class, students had to learn how to approach solving problems in a positive way, while keeping their long-term goals for the course and their learning in mind. They had to learn how to be comfortable not knowing, with the frustration of getting stuck, with making mistakes and trying again, and with the struggle that comes with mastering difficult concepts. The problems my students were solving didn’t care how they felt, but their ability to manage their emotions affected their ability to solve problems.

Like students in science classes across the U.S., my students also spent much of their time working collaboratively. Science teachers have good reasons for this. First, collaborative problem solving integrates academic, social, and emotional learning seamlessly. Second, scientists, engineers, and related professionals actually do work collaboratively, so it’s important that students practice doing so. Finally, students learn science better when they must explain their thinking to each other and work through conflicting ideas. In practice, students’ ability to do this well has immediate stakes in science classes, since groups that allow poorly considered thinking to stand rarely succeed at their problem-solving tasks.

The ability to navigate social situations is another important component of collaborative work, and it’s one that many students need help with. Every science teacher has encountered the student who takes over whatever group he or she is put in, the secretly competent student who is reluctant to share their ideas with group members, and the too-friendly group that struggles to stay on task.

Students do not develop the social and emotional skills needed for problem-solving and collaborative work automatically. As a teacher, I increasingly integrated these skills into lesson, unit, and individual mentorship plans as I gained more experience. This included explicit instruction and planned interventions on how to approach and frame difficult problems, process feedback on mistakes, accurately self-assess one’s thinking and abilities, balance participation between members of a group, and work through intra-group conflict. Much of what I put into practice was based on the research and recommendations from the physics education research community and groups such as Physport.

So why don’t we think about science more when we think about SEL? Perhaps it’s the nature of the subject, which tends to conjure images of emotionless protons and electrons. Or perhaps the issue is with the term itself. As Fordham’s report reveals, “social and emotional learning” may be too jargony for many parents, and unlike “character” and “noncognitive skills” (both of which have their own definitional and issues and problematic connotations), it sounds like the sort of thing you develop in conversations with school counselors and psychologists, and that—however vital to student success—seems pretty far removed from science class.

That’s unfortunate because an actual science class, which is full of people, is one of the best places for students to learn the social and emotional skills that parents are most interested in, despite—or perhaps because—all those molecules and atoms and quarks not caring what you think or how you feel. It’s also a great way to teach these skills indirectly, which Fordham’s report also found parents prefer and is less politically polarizing. School leaders—and science teachers—take heed.