Power to the people? Part 2: History’s lessons for “community control” 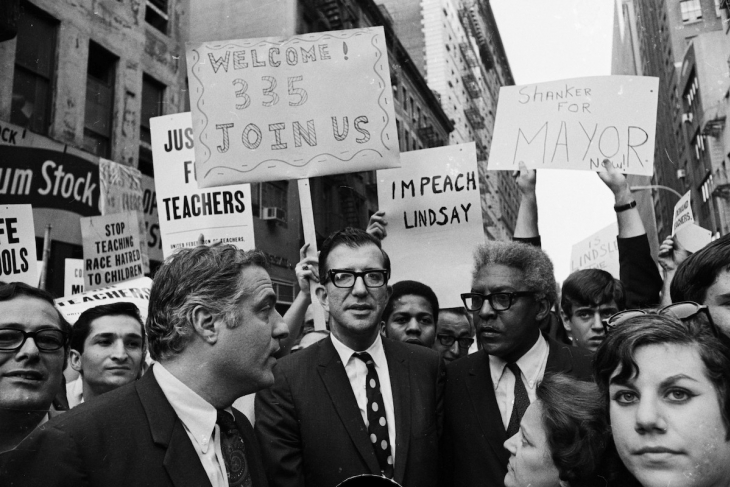 In last week’s Gadfly, I shared some misgivings about today’s push for “community control” on the part of many education reformers and philanthropists. Now I want to explain how my misgivings are informed by a pair of previous such ventures, dating back to my earliest—perhaps formative—exposure to earnest efforts to boost the lives and prospects of poor Americans and people of color. I’m mindful of the maxim, attributed to many, but most authentically to Santayana, that “those who cannot remember the past are condemned to repeat it.”

The centerpiece of LBJ’s “war on poverty” circa 1964 was the “Community Action Program,” which my own mentor, the late Daniel P. Moynihan, autopsied in 1969, the year after the King and Robert Kennedy assassinations, amid urban riots far larger and more damaging than those of the past couple of years. Pat’s much-discussed book, titled Maximum Feasible Misunderstanding, didn’t say that everything about community action was a failure. But he itemized the ways its architects had failed to think carefully about—and agree on—how it would actually work in practice. Hence the many unintended and often undesirable effects that it wound up having. Among them: disruption of local governments and political arrangements that had at least been functional; the empowerment of new political figures who used their unaccustomed influence mainly to further their own careers; a lot of money and influence ending up in the hands of new elites, mostly experts, organizers, planners and technocrats—those Irving Kristol would later dub the “new class”—and more than a little plain old-fashioned corruption.

Moynihan wasn’t alone. Lyndon Johnson himself looked back on his anti-poverty program with considerable misgivings. On the verge of leaving office in late 1968, he had this to say, in an oral interview with then-OEO director Bertram Harding: “This is not what I set up poverty [for].... All this theoretical stuff, a bunch of goddamn social workers going out and shoveling money through a bunch of half-baked organizations. The biggest, crappiest thing that I ever saw.... I just feel terrible about it.”

The “war on poverty” had many parts, of which “community action” was just the centerpiece. Other elements, such as Head Start, the Job Corps, and the Teacher Corps were more tightly connected to education. But they, too, contained “empowerment” strands, such as Head Start’s insistence on hiring local residents rather than professional educators to work with needy two- and three-year-olds. It didn’t even try to function as a sophisticated kindergarten-readiness program, though that might have done those toddlers, all poor and mostly Black or Brown, more good. This remains a challenge for Head Start even today.

The other big “empowerment” example from the 1960’s that I worry about as possible precedent for contemporary developments was New York City’s big move to decentralize the control of its public schools, particularly the episode known to history as “Ocean Hill-Brownsville.” This has been much written about and remains the subject of controversy among historians and journalists as to who did what to whom and, especially, why. But the basic facts are pretty straightforward.

In 1966, the New York–based Ford Foundation, newly led by McGeorge Bundy, former dean at Harvard and JFK’s national security advisor, announced that its entire domestic focus going forward would be civil rights: “We believe,” he said, “that full equality for all American Negroes is now the most urgent domestic concern of the country.”

This included a major Ford commitment to the empowerment of Black leaders and community control of institutions affecting them, a commitment that Bundy himself applied to the New York City schools, chairing a panel that in 1967 recommended to Mayor John Lindsay that governance of Gotham’s public schools be placed under the control of localized school boards instead of a central citywide board and superintendent. (Can you picture two more “elite” individuals than McGeorge Bundy and John V. Lindsay?)

Three communities—all Black and/or Brown—were selected to pilot the decentralization plan. One of them was the overwhelmingly Black Brooklyn neighborhood known as Ocean Hill-Brownsville.

The pilot program was messy from the outset. In a lengthy obituary just last year of Rhody McCoy, the career Black educator who became superintendent of Ocean Hill-Brownsville, the New York Times recalled that, “Control was never clearly defined, nor was the local district given the support it needed to redeem what it considered its mandate—whether because of bungling by the Board of Education’s grinding bureaucracy or deliberate sabotage.”

Ocean Hill-Brownsville was already a tough and troubled neighborhood, and its residents had some legitimate grievances involving white folks. By the time control of the schools was decentralized, theirs were both segregated and crowded and nearby white neighborhoods had resisted doing anything about the problem. There had also been some painful police-related incidents. And there was an appetite for changes in the school curriculum.

Whatever the eventual goal, the decentralization experiment got off to an awful start in that community when, on May 9, 1968, as recounted by Rick Kahlenberg, the new local school board “sent telegrams to nineteen unionized educators, informing them that their employment in the district was terminated. Eighteen were white...Rhody McCoy, the local superintendent, told the New York Times: ‘Not one of these teachers will be allowed to teach anywhere in this city. The Black community will see to that....’”

Besides being White, and dismissed with no semblance of due process, those teachers were all members of the United Federation of Teachers, headed by the thirty-nine-year-old Albert Shanker.

What happened next was a teachers strike that started in Ocean Hill-Brownsville but soon went citywide. Actually, there were three strikes in the fall of 1968, the effect being that New York’s public schools were closed for thirty-six days. “At the time,” Kahlenberg notes, “it was the largest and longest set of school strikes in American history.” It also catapulted Shanker into national visibility and a long-lasting role as union leader and, in time, education reformer and statesman.

Though the strike was citywide, schools in Ocean Hill-Brownsville stayed open, as non-union replacement teachers were swiftly hired. But it got ugly fast. At Junior High School 271, recalled the then-student body president: “There was so many people. There were thousands of police. There were snipers with guns on the roofs. Sometimes there were helicopters. There were police on horses. There were police with K-9 units with mean dogs. The reporters with the fedora hats and the little pads with the pencils, the photographers with the light bulbs when they flash it.”

It got worse. Again, the McCoy obituary:

Adding fuel to an already combustible caldron was a supporting cast that included Herman Ferguson, who was nominated as a principal by the district’s governing board while under indictment for conspiring to murder moderate civil rights leaders; Leslie Campbell, a Black teacher who during a radio interview read a poem by a student that included the lines “You pale-faced Jew boy—I wish you were dead”; and John O’Neill, a teachers’ union vice president, who became alarmed by the rising racial tension and publicly broke with Mr. Shanker.

“He was a veteran educator surrounded by angry activists,” Dr. Ravitch said in an email. “He gave legitimacy to their cause. He was not caught in the middle. He enjoyed being the public face of the community control movement, and he must have enjoyed the discomfort he caused the establishment.”

It couldn’t last. Tensions were too strong, conflict too intense, interests too threatened. The state legislature got involved the next year, scrapping the three pilot projects and reshaping the governance of New York’s schools that left a semblance of authority over elementary and middle schools with thirty-two “community districts” but returned most authority to the central board of education and the citywide UFT contract, where it remained until Michael Bloomberg persuaded lawmakers in 2002 to put the mayor and his hand-picked schools chancellor in charge.

There’s no simple takeaway from this failed experiment with community control of the schools, any more than from Johnson’s vexed community action program. But it’s important for today’s reformers and funders to recognize the likelihood that community leaders won’t diagnose or prioritize kids’ educational needs in the same ways as professionals, experts, and technocrats might. That’s not necessarily a bad thing so long as the kids benefit. But consider what was happening in San Francisco until the locally-elected local board got sued (by the city itself!) and backed down: They were keener to rename schools than to reopen them! Meanwhile, according a Stanford public policy report in 2017, San Francisco has “the worst black student achievement of any county in California.” Shouldn’t that be everybody’s top priority?

Consider, too, current goings-on in the schools of Buffalo, where equity-driven efforts to infuse just about everything they do with wokeness and anti-racism seem to consume an education system that might better focus on the 82 percent of middle schoolers who aren’t proficient in math and the 80 percent who haven’t reached that bar in reading. And that was before the epic absenteeism associated with the pandemic.

San Francisco and Buffalo have school systems run by locally-elected boards and the superintendents that they hire. That’s what America has historically meant by “local control of the schools.” What will happen if control of individual schools becomes even more “localized?” We’ve seen a considerable amount of this—with mixed results—as charter schools have spread in many places, and we should expect plenty more of it as more local leaders seize—or are handed—the levers of power and funding. As with charters, some will focus on the academic achievement of their students and some will do a superb job of boosting it, including among children of color. Sadly, others will seize this opportunity to push whatever is politically fashionable and resonates with their communities or their own peers. Some will inevitably focus on opportunities for patronage and, perhaps, payback.

It’s not that the elite “experts” who designed Johnson’s community action program or New York’s experiment with community control did great. Nor were they entirely wrong. They surely meant well. But things tend to go off the rails, plans get confused, the appearance of shared goals sometimes conceals sharply differing objectives, too many cooks add their own ingredients to the soup, and, especially, most of the time things just don’t work quite as intended. The surest takeaway from this brief history lesson is the reminder that the law of unintended consequences has never been repealed. And nothing within the power of even the most ardent reformer or wealthiest donor can repeal it.