Observations from the front line: Ohio debates the Common Core 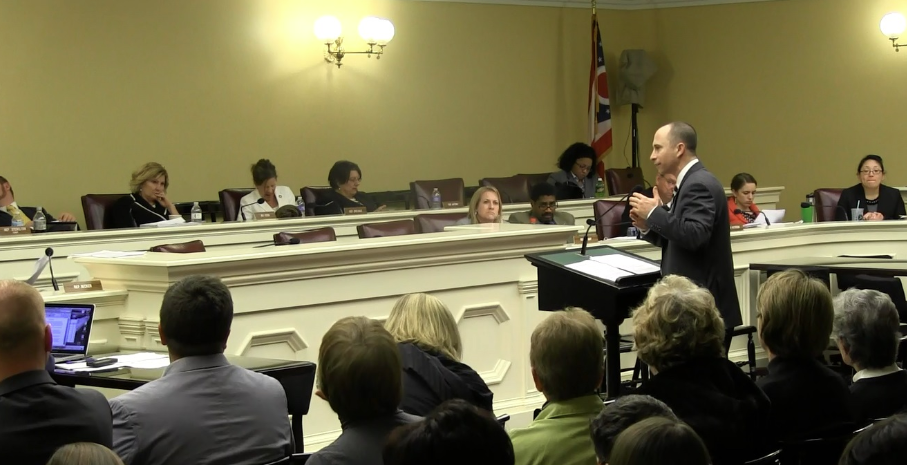 On November 20, the Ohio House Education Committee heard testimony on House Bill 237, legislation that would prevent the state board of education from continuing its efforts to implement the Common Core State Standards. The committee previously entertained sponsor testimony on the legislation from Representative Andy Thompson, but this was the first opportunity for the public to testify on this bill.

Hundreds of concerned Ohioans, both supportive of and in opposition to the Common Core, descended upon the Statehouse to make their thoughts known, some arriving up to two hours before the 5 PM hearing. As the hearing time approached, the crowd outside the committee room swelled, and frustration grew as it became apparent that the committee room, the largest in the Statehouse, would not be able to accommodate everyone in attendance. To make matters worse, debate on the House floor ran late, delaying the start of the committee until almost 7 PM.

Undeterred, the mostly anti–Common Core crowd remained and filled the committee room and the Statehouse Atrium (an overflow area that received audio of the committee proceedings). More than forty people signed up to testify before the committee and were split roughly evenly between Common Core supporters and opponents. In the more than six hours of testimony—the hearing ended just after 1 AM—legislators were treated to a good mix of views on both sides of the issue and were presented information from individuals with experience at the national level (including Fordham’s Mike Petrilli), state level, and local level. While the debate was heated, supporters and opponents alike refrained from the kinds of conspiracy theories and personal attacks that too often characterize discussions of the Common Core in other states.

In case you couldn’t be there, what follows are some common themes and observations from the hearing.

While critics might tinker around the edges, supporters and opponents alike acknowledged that Ohio's previous standards were inadequate. This is consistent with Fordham's past work, in which we rated Ohio's old standards a C in both math and English language arts but gave the Common Core standards an A- and B+, respectively. One growing concern is that there is an increasing tendency to pick out an example of a textbook that is labeled “Common Core aligned” and to attack its quality or content. This creates a compelling story, but it usually says little about the underlying standards. Bad textbooks are bad textbooks, and the Common Core will do nothing to change that. This is where local control will be most critical, as Ohio districts will have the opportunity—no, the responsibility—to choose high-quality learning materials for their students.

Support for the Common Core is both strong and broad

Opponents of the Common Core are passionate about the issue and turned out in significant numbers to express their views. This makes it easy to forget about the broad cross-section of organizations that support the Common Core standards in Ohio. This includes teacher unions (the Ohio Education Association and the Ohio Federation of Teachers), school and district leadership (the Ohio Association of School Business Officials, the Buckeye Association of School Administrators, and the Ohio School Boards Association), education leaders from both parties (House Education Chair Stebelton, House Education Ranking Minority Member Fedor, Senate Education Chair Lehner, and Senate Education Ranking Minority Member Sawyer), state education leaders (the Ohio State Board of Education and the Ohio Board of Regents), business groups (the Ohio Business Roundtable, the Cincinnati Business Committee, and Columbus Partnership), parent and community groups (several urban leagues and the Ohio PTA), and diverse education-reform groups (School Choice Ohio, StudentsFirst, the Ohio Alliance for Public Charter Schools, and the Thomas B. Fordham Institute). It’s hard to remember a time when so many diverse groups supported a single idea, especially in education.

The argument that the standards were adopted under the radar or without the opportunity for public impact simply goes against the facts in Ohio. State Board of Education member Tom Gunlock provided a very detailed timeline of the efforts taken by the Ohio Department of Education to engage the academic community and general public. As a matter of process, however, Ohioans have had multiple opportunities to learn about and give feedback on the Common Core.

Highlighted by Mr. Gunlock's testimony, but often lost in the debate, is the fact that Ohio is currently in its fourth year of Common Core implementation. This isn't a passing fancy for school districts. They have been faithfully implementing the standards, providing professional development, and adopting and refining curricula for years. Changing course now would undo all of the preparation and investment those districts have made. Even after all of the implementation efforts, education professionals overwhelmingly support the standards; a Fordham survey this spring found that 68 percent of district superintendents believe that Common Core implementation will lead to fundamental improvement in Ohio’s K–12 education system.

Ohio has had statewide learning standards for more than a decade

Disconnect amongst Common Core opponents on the issue of local control

On the subject of local control, there is an interesting undercurrent that merits mention. The national experts testifying that the Common Core isn't sufficiently rigorous cited the lack of specific reading requirements. The suggestion is that if the standards don't specifically require Twain, Hawthorne, Emerson, Chaucer, Homer, or whomever the expert deems essential, then those works won't be read. Yet over and over again, local Common Core opponents stress that the government (through standards) should not be telling our students what to read. On this point, it seems that local core opponents may be more in line with core supporters who assert that the Common Core standards are broad enough to allow school districts to adopt their own curricula (including reading materials), as long as the chosen texts are rigorous.

Student data and privacy are important, but these aren’t issues specific to the Common Core

The student data and privacy concerns expressed by Common Core opponents resonate with legislators and most everyone else, including Common Core supporters. During his testimony, State Board of Education member and Common Core supporter C. Todd Jones acknowledged the importance of protecting student data. He also let legislators know that state law already prohibits the transfer of personally identifiable student information such as that feared by Common Core opponents. It's beginning to look increasingly like the data-privacy argument is a red herring, at least as it relates to the Common Core, because student data is already protected under state law and any legislative or administrative changes later deemed necessary to protect student privacy would draw broad consensus from all parties involved.

The Common Core was a state-led initiative, but the federal government has engaged in the issue

Common Core opponents continue to focus on what they perceive as a federal takeover of education by President Obama. Given the recent debate surrounding the Affordable Care Act (Obamacare), one can see what gives rise to those concerns. There are two key differences. First, the development of the Common Core State Standards was started by the National Governor's Association and the Council of Chief State Schools' Officers in 2007, before President Obama even took office. Second, Obamacare requires federal intervention because it is a federal program. Rolling back the Common Core would require individual states to reverse their own adoption decisions. The very fact that HB 237, which would prevent Ohio's continued participation in the Common Core, is under consideration speaks against the notion that Ohio doesn't have a choice as to whether or not it will participate in the Common Core. There is a difference though between federal control and federal involvement. On this point, Common Core supporters should acknowledge that President Obama and Secretary Duncan have chosen to encourage and incentivize participation in a way that they shouldn't have. It is critical going forward that the federal government steers clear of the standards debate. I'm sure there is plenty inside the Beltway to keep them busy, like maybe passing a budget this year.

The debate in Ohio regarding the continued implementation of the Common Core State Standards has been mostly positive. Good public policy requires that opposing views are heard and considered. While in our view Ohio should continue moving forward with Common Core implementation, opponents’ testimony also ensured that the state continues to pay close attention to the quality of the implementation at the local level, the protection of student data, and the independence of Ohio from any federal mandates or directives in regards to education. Each of those is an important lesson if Ohio is to utilize its new learning standards to help improve student achievement.