A “no zeroes” grading policy is the worst of all worlds 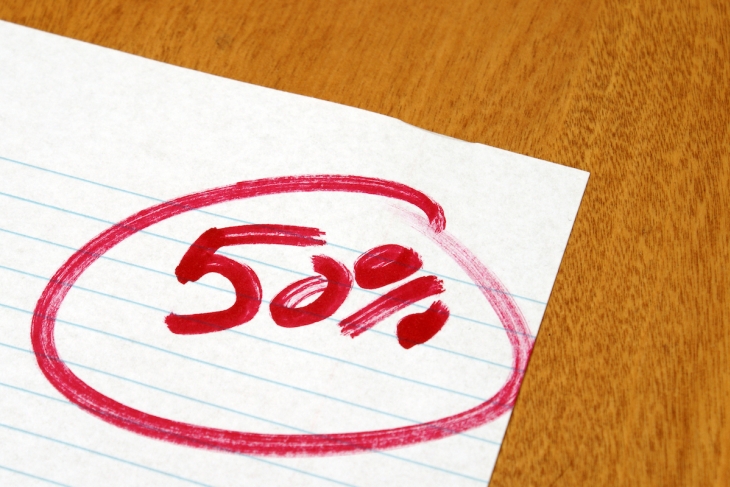 More and more schools across the U.S. have adopted a new grading fad: Teachers cannot assign a grade lower than 50 percent. If a student doesn’t turn in an assignment? 50 percent. Do they miss every problem on a vocabulary quiz? 50 percent. Even some KIPP schools—an influential charter system that sets cross-country trends—have adopted the practice.

It’s meant to encourage kids, of course, and not completely torpedo their GPAs. It’s part of being nice and progressive, considerate of students’ feelings and respectful of their egos. As prominent education writer Doug Reeves wrote in “The Case Against the Zero” in The Kappan in 2004, assigning a zero is disproportionate punishment. Each letter ordinarily amounts to about 10 percent—90’s are A’s, 80’s are B’s, 70’s are C’s, and so on—so the sixty-point spread between a D and 0 is excessively punitive. “Just two or three zeros are sufficient to cause failure for an entire semester,” adds Reeves.

I don’t dispute Reeves’s math, but I do disagree with his underlying assumptions. Proportionality is no clear determinant of fairness or justness. I want a surgeon to know far more than 60 percent of their craft, but a Major League Baseball player who gets a hit 60 percent of the time would set the all-time record. One historical review of grading practices draws attention to an old system that allocated grades on a different sort of curve: “excellent (3 percent of students), superior (22 percent), medium (50 percent), inferior (22 percent), and failure (3 percent).” Cut-off points are at times arbitrary, yes, but not necessarily unfair.

In our modern iteration, that 60 percent represents more than a proportionate designation of points. The grades D represents the barest minimum of what a school or teacher considers acceptable by way of student learning. Below that is completely unacceptable, deserving of no credit, no points, no reward. Understood so, the current system tilts toward mastery, even excellence, thereby incentivizing students to more than mere completion.

What’s more, eliminating the zero invites all sorts of problems. If a student anticipates failing a test, project, or essay, how many will simply avoid any attempt, knowing that only a 50 percent awaits? Whereas a 0 percent weighs heavily on someone’s final grade, and so incentivizes students to make corrections or seek out additional help, how many students will instead just accept a mediocre final grade? What are the knock-on effects of ever-worsening grade inflation? What implicit message does it communicate to students when no effort receives half points?

That being said, the place of proportionality in a grading system is a far less interesting discussion than if our current system is broken, and if so, with what we might replace it.

There’s a famous thought experiment called “Chesterton’s Fence” that can help frame this discussion. In short, we shouldn’t remove a fence—an institution, a practice, a tradition—unless we know why it was first erected and have a clear plan to replace it. Our ignorance of its purpose does not mean it serves none.

In this case, our current grading system isn’t terrible. It provides at least some extrinsic motivation. It incentivizes excellence over mere completion. And as all the SAT critics love to point out, a student’s GPA has proven to be an almost chillingly accurate predictor of future college and life success, meaning a letter grade succinctly condenses countless factors—from general intelligence to content mastery to conscientiousness—down to a simple, useful data point. Monkeying around might make it less so.

It’s also an efficient system. Limited teacher time is a real concern. It is fine to urge that we move to a personalized-learning, competency-based model in which we sequence every piece of knowledge and skill, assess where students are, and assign points and plan instruction accordingly. But when I have 150 students and little if any prep, a quick assignment of points on a 100-point scale allows me more time for feedback, parent communication, or thoughtful sequencing of lessons.

But let’s assume for the sake of argument that the fence is broken, useless, and in need of replacement. There are countless interesting innovations floating around the education space that are superior to an across-the-board, no-zero grading policy.

Comparative grading normalizes grading on a bell curve. It finds justification in the psyche of graders. Humans are bad at absolute judgements, like how much something weighs, but are very good at comparative judgements, like which object is heavier. Other recommendations include additive grading—wherein students begin with a zero and work towards a 100 as they complete assignments—and standards-based grading—where students receive scores on specific skills and knowledge criteria, rather than points for effort or good behavior.

Each of these alternatives carries their own tradeoffs, and the evidence for each of these proposed reforms is on shaky ground so far. Regarding standards-based grading, the historical review acknowledges that “literature on SBG implementation recommendations is extensive, but empirical studies are few.” The case for no-zero grading policies is even shakier, however: The only study I was able to find admitted that “public opposition and limited evidence of effectiveness has led multiple schools to abandon no-zero grading policies.”

Even so, each of these alternatives consists of a substantive replacement to the traditional A-to-F model. Simply requiring all teachers give at lowest a 50 percent is the worst of both worlds.

Understood so, a better analogy might not be a fence but a bridge. Consider instead an old stone-arch bridge crossing a gorge. It’s more functional than people give it credit, and perhaps it’s time for an update—but perhaps not. Yes, it could be replaced by a modern suspension or cantilever bridge. There are plenty of alternatives. So, too, in evaluating student work we find several options: additive, comparative, standards-based, or even a re-proportioned scale implemented with forethought. However, this latest fad, just cutting off the grading scale at 50 percent, is akin to demolishing half the old bridge and calling it fixed.