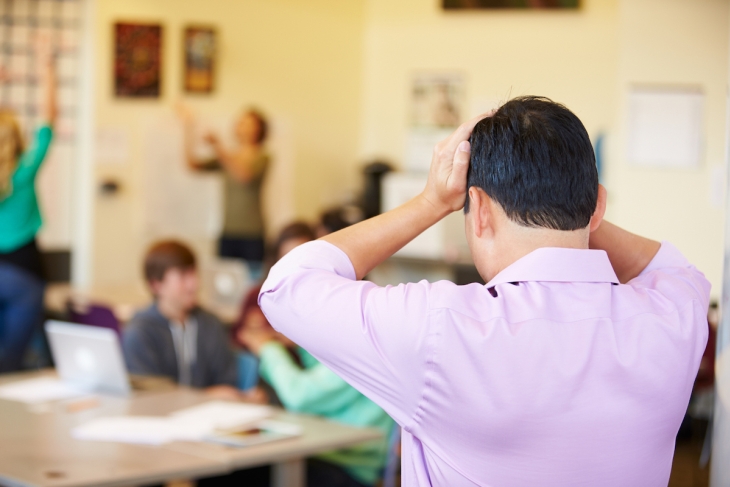 Editor’s note: The following is adapted from the newly released paperback edition of Hollowed Out: A Warning About America’s Next Generation.

Teachers’ authority in the classroom is being undermined by policies of “restorative justice”—a non-punitive approach to discipline wherein issues are supposed to be addressed “inside the school,” not with suspensions. These policies, like so many in our education system, are well-intended. They are meant to address the problem that so many minority students end up in a “school-to-prison pipeline” after a series of “minor infractions of school rules.”

But the predictable albeit unintended consequence of these well-meaning policies is that disruptive students get away with previously unacceptable behavior. Outbursts of student vulgarity and violence have become normalized as things that teachers and other students have to endure. Two-thirds of teachers in poor school districts say they have disruptive students who should not be in class. More than three-quarters believe that the interests of well-behaved students are being sacrificed to the indulgence of bad behavior.

New York City English teacher J. Bryan McGeever paints a vivid and disturbing picture of what relaxed discipline policies have done to the learning environments of New York City schools. He writes: “Students committing outrageous misconduct often stay in their regular classrooms. Remember when cursing out a teacher was a very big deal? Well, now it’s just Tuesday.” He goes on, “We know about the brutal fights in cafeterias, the spitting in an administrator’s face without consequences, the ‘wake-and-bake,’ marijuana-addled teens who can barely keep their heads up.”

While suspension rates are down, he argues, it is not because students are behaving any better. It’s not because intimate classroom chats have made challenging students see the error of their ways or because they have subdued their rowdier inclinations. No, it is because teachers are forced to endure whatever students brazenly and flagrantly throw at them (sometimes literally). It is only in the peculiar world of modern education that teachers are told to purposefully turn a blind eye to behaviors and actions that would be unacceptable in any other setting. Only in schools are we now told to “get curious, not furious” and where we recast “standing down” in the face of student misconduct not as a dereliction of duty on the part of teachers, not as tolerating the intolerable, but as acts of heroic compassion and sophisticated understanding.

The breakdown of order, the absence of discipline, and the extinction of any concept of “tough love” is a brutal everyday reality for modern American educators. Yes, suspensions are down, but the students are not stupid. They know what they can get away with. They know that they can come to class high or tell a teacher to “screw off” or copulate in the stairway and that the penalty will be paltry or even nonexistent.

Many teachers feel that they are being held hostage to an ideological experiment that harms them and their ability to teach, that harms innocent students who are trying to learn, and that in the end harms the very people it is meant to help by not holding them accountable for their actions. If they are not held accountable by the school, why should they think they will be held accountable by society when they act in antisocial or violent ways? Certainly, within school, when abhorrent student behavior is tolerated, accommodated, and given endless indulgence, it proliferates. Teachers are often afraid to articulate their doubts and misgivings about “restorative” practices because these practices are focused on helping racial minorities. But the plain fact is that they do not remedy what’s deficient in education. Listen to what American teachers have to say. And watch many of them exit the field rather than tolerate what’s happening on it.

In 20I9, the Thomas B. Fordham Institute worked with the RAND Corporation to survey teachers of grades 3–12 on the topic of school discipline, intentionally oversampling African American teachers and teachers in high-poverty schools. Among its key findings:

We read that “Despite the likely costs for students who misbehave—and their belief that discipline is racially biased—many African American teachers say suspensions, expulsions, and other forms of ‘exclusionary discipline’ should be used more often.” In fact, Black teachers are more likely than White teachers to argue that suspensions are used too sparingly.

Some of the quotes from teachers in the Fordham study are heartbreaking to read, if unsurprising to today’s classroom practitioners:

“Over the course of my career, disrespect for adults on campus has grown.”

“The students were awful to me. I would cry in my car some days.”

“There are very few consequences for student misbehavior. Students have learned this and know they can get away with anything.”

The teachers whom students come back to thank later in life are usually those who set high expectations for their students, who challenge them, who hold them accountable. As Mark Edmundson writes in his excellent book, Teacher: The One Who Made the Difference: “The two greatest teachers we know in the West, Socrates and Jesus, were not without kindness, to be sure, but both had a sharp edge. Jesus asked people to do the impossible. He wanted them to give up all of their possessions and follow him, to change their lives utterly around. Socrates asked one badgering question after another about why his contemporaries behaved as they did.” In sum, “the great teachers who matter the most” do not always come in an “all-benevolent mode.”

All well-intentioned reformers seem to operate from the premise that schools can fix the myriad problems in civil society that our laws and institutions have otherwise failed to fix or improve. But our schools are not and cannot be cure-alls. They cannot make up for students’ unstable home lives, the drug addiction of parents, insufficient medical care, poor nutrition, poverty, or neighborhoods where violence and profanity are ubiquitous and trust is fleeting.

As Nick Hanauer, venture capitalist and founder of the public-policy group Civic Ventures, wrote, “Long ago, I was captivated by a seductively intuitive idea, one many of my wealthy friends still subscribe to: that both poverty and rising inequality are largely consequences of America’s failing education system. Fix that, I believed, and we could cure much of what ails America.”

Hanauer, like so many, had fallen prey to what I call “the magical solution illusion in education”—the idea that an illusive cure-all exists and modern educators need only to discover and implement it. There is nothing less magical and more illusionary than to believe lax discipline policies lead to better student behaviors.

I know that heroism in the classroom is possible, that a single teacher can be a transcendent figure for a child—a guide to a path of knowledge rather than ignorance, achievement rather than aimlessness, human engagement rather than human neglect. But it is both misguided and arrogant to believe that school faculties and services can supplant families and neighborhoods. Classrooms are places of impermanence, of transition from one class, one grade, to another. One’s family, whether united or broken, whether you like it or not, is forever. Inevitably, parents are the primary instructors of their children, and the culture in which children are brought up is formative. School is only one part of a young person’s education and path to maturity.

Jeremy S. Adams is the author of Hollowed Out: A Warning About America's Next Generation. He has taught American civics for 24 years in Bakersfield,…