High achievers will benefit from most state ESSA accountability plans Advocates for gifted and talented education will always face an uphill struggle. Garnering support for policies that, by definition, benefit a small subset of students is hard—and harder when so many people assume that these kids will do fine regardless.

The inevitable—but foreseeable—result is the emaciated condition of programs designed to serve such children in U.S. public schools: scarce, often thin, and frequently staffed by ill-trained educators.

Weakness in gifted education undermines the country’s long-term prosperity. It’s also inequitable and bad for social mobility. The students most harmed are able pupils from disadvantaged backgrounds, who depend far more than upper-middle-class students on the public education system to support them.

One partial remedy for this neglect is to ensure that policies that focus on all students truly benefit high achievers, too. Properly crafted, such policies can be significant boons for bright, motivated pupils, while sidestepping the “elitist” label that too often gets applied to gifted-centric initiatives.

The federal Every Student Succeeds Act (ESSA) presents just such an opportunity for broad-gauged policy improvement at the state level—and it’s heartening that most of the new state accountability plans for schools under that statute are likely to do some good for gifted students.

ESSA replaced No Child Left Behind, which gave schools and teachers incentives to focus almost exclusively on helping low-performing students get over a modest proficiency bar. This neglected those who were likely to pass state reading and math tests regardless of what happens in the classroom. ESSA fixed this flaw by granting states more authority over their accountability regimes, giving them the opportunity to design different and improved systems.

That could have backfired if few states seized the opportunity—or made matters worse. That’s why we at Fordham published four reports and multiple blog posts encouraging every state to encourage their schools to focus on all pupils, not just their low performers. They could do this by giving substantial weight to a measure of academic growth for all students from one year to the next and/or by measuring achievement in a way that looked beyond proficiency, such as by using average scale scores or a performance index.

Performance indexes give schools credit for raising the attainment of their pupils across the ability spectrum. A state might, for example, create a system that gives schools partial credit for getting students to a basic level of achievement, full credit for getting them to proficient, and additional credit for boosting pupils to an advanced level.

And a “scale score” is just what a student attains on a scaled assessment, such as 670 out of 800 on the SAT math test. Average scale scores, then, are the average score of all students within a school and/or the average scores of particular student subgroups, such as disadvantaged, African American or Latino students, students with disabilities, etc. These, too, give schools credit for improving the performance of pupils across the achievement spectrum—but scale scores do this at a more granular level and are therefore even better than performance indexes.

States were obligated to submit their accountability plans to the U.S. Department of Education by September. All fifty (and D.C.) did so, and we document and analyze what they submitted in Fordham’s new study, Rating the Ratings: An Analysis of the 51 ESSA Accountability Plans.

In gauging whether a state’s accountability system encourages a focus on all students, we assigned ratings or weak, medium, and strong. Top marks went to states in which at least half of the accountability system was based on a performance index, average scale scores, and/or growth for all students. A medium meant those components made up between a third and half of the state’s plan.

The results were good for gifted students: 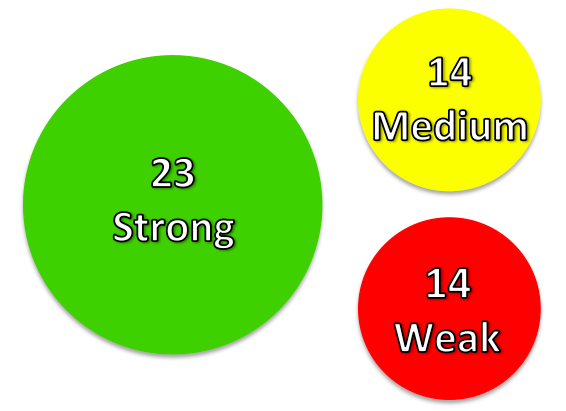 Twenty-two states and D.C. earned strong grades—with Colorado and Louisiana faring best—and another fourteen earned medium marks. In other words, 75 percent of the accountability systems that states plan to implement under ESSA do a good job of encouraging schools to focus high-achieving students, too—far, far better than under NCLB.

Even better: Rigorous studies from the NCLB era demonstrated that the design of state accountability systems can and does drive behavior in schools.

ESSA’s promising long-term effect on the education of high-achieving students is a great example of how large policies can indirectly benefit bright kids, and why those policies deserve the backing and political clout of gifted-child advocacy groups. Their goal—which I myself share—is to improve the academic outcomes of high achievers, and we ought to be pragmatic in how we bring that about.

We also ought to, at least for a moment, pause to applaud this victory for gifted education.