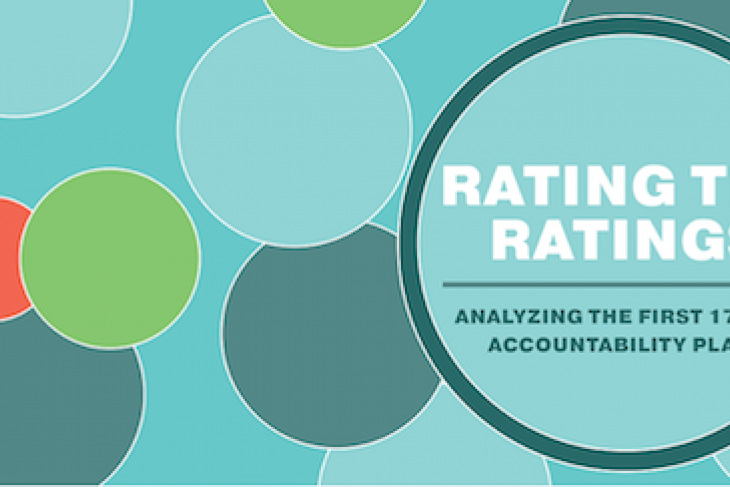 The Every Student Succeeds Act (ESSA) grants states more authority over their school accountability systems than did No Child Left Behind (NCLB)—meaning that states now have a greater opportunity to design improved school ratings. In Fordham’s new report, Rating the Ratings: Analyzing the First 17 ESSA Accountability Plans, we examine whether states are making the most of the moment.

In our view, three of the most important improvements that states can make are to ensure that their accountability systems:

Based on these three objectives, we rate states’ planned accountability systems using the most recent publicly available information. States can earn grades of strong, medium, or weak in each.

Table 1 shows the results for the seventeen plans that have been submitted to the U.S. Department of Education, sixteen of which have enough information for us to rate.

Table 1. Results for states that have submitted plans to the U.S. Department of Education

Although many national observers have been worried about their rigor and quality—and, to be clear, we see some plans in need of improvement—we find that, for the most part, states are moving in a positive direction under ESSA. In fact, in our view, seven states have proposed ratings systems that range from good to great: three states—Arizona, Colorado, and Illinois—earn strong ratings across the board; and four others—Connecticut, the District of Columbia, Tennessee, and Vermont—receive two strong marks and one medium.

As for the individual objectives, state systems are particularly strong when it comes to assigning clear and intuitive labels. Eleven earn a strong mark for using either A–F grades, five-star models, or user-friendly numerical systems.

Similarly, eight plans earn a strong rating for signaling that every child is important by looking beyond proficiency rates when gauging achievement and measuring the growth of all students. This is a huge improvement on NCLB-era systems, which encouraged a focus on "bubble kids," those just below or above states' proficiency cutoffs, to the detriment of other students.

Yet we see somewhat less progress when it comes to making accountability systems fair to high-poverty schools. Achievement measures—including proficiency rates, performance indexes, and scale scores—are strongly correlated with prior achievement, and given that low-income students tend to enter school far behind their peers, high-poverty school are likely to fare poorly. Growth measures should therefore constitute the majority of summative ratings, but only four states propose such a system and earn a strong here. Nine others do, however, assign growth measures sufficient weight to earn a medium rating, so the news is still good compared to systems in place under NCLB.

The seventeen jurisdictions that submitted their ESSA applications by the first deadline volunteered to be guinea pigs—or, if you like, sacrificial lambs. There is little doubt that the other thirty-four states are watching closely, both to see models they might emulate and to learn how the U.S. Department of Education reacts to what has been proposed.

Will the remaining states do even better? We see no reason that they cannot, and we’ll be back in the autumn to find out how they do.