Examining the benefits of career and technical education at scale 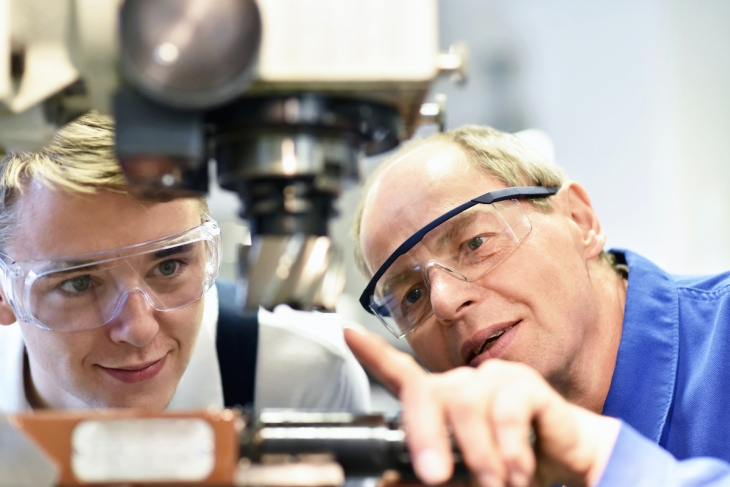 When it comes to career and technical education, there’s one state that seems to be getting things just about right: Connecticut. It boasts a long history of strong CTE programming and, thanks to efforts beginning in the early 2000s, all the locally-administered career schools across the state were integrated into a single statewide system known as the Connecticut Technical High School System (CTHSS). Today, the system includes seventeen diploma-granting technical high schools and one technical education center, serving approximately 10,200 full-time high school students—a whopping 7 percent of the state’s high school student population—with comprehensive education and training in thirty-eight occupational areas.

How well do those schools prepare students for postsecondary success? A recent working paper from a trio of researchers from the University of Connecticut and Vanderbilt University seeks to answer this question. The quasi-experimental study is the first of its kind, examining the causal impacts of attending a comprehensive high school CTE program. The strength of this study comes from the fact that it examines every school in the system, thus examining a program that is being offered at scale, whereas previous analyses used only schools that agreed to participate in the study.

CTHSS is a unique, all-encompassing program that begins when students apply for admission as eighth graders. They can apply to up to three schools and rank order their choices. Application scoring is based on standardized eighth grade test scores in math and English, student GPA, attendance in middle school, and extracurricular activities and written statements. School administrators establish a threshold score for admission, and students above that threshold are generally first to be offered seats. Because the schools are always oversubscribed, however, remaining seats from students that decline an offer are offered to applicants with lower application scores. Some students below the threshold are admitted in the first round to increase diversity.

Because of the complexity of the admission process, researchers in this analysis use a “fuzzy” regression discontinuity model that treats application scores as cut scores. Students just above the threshold are 87 percent more likely to receive an acceptance letter, and such students are more likely to attend the school to which they applied, compared to students just below the threshold. Importantly, researchers also create separate models for male and female students to account for the well-documented gender differences in CTE specialization, with men focusing on construction and manufacturing trades and women on human services and tourism. Counterfactual schools were determined by the town or city in which the student resided in eighth grade when applying to CTHSS. This was a strong counterfactual, as most students attend the high school in the district they live in if they did not receive admission to a CTHSS school.

Part of what makes this study so strong is the size and quality of the panel data used to perform the analysis. Researchers used applications from approximately 57,000 eighth graders who applied to CTHSS between 2006 and 2013. These students are then matched to the Connecticut Department of Education’s longitudinal data system, and information on race, gender, free-and-reduced-price-lunch status, English-learner status, and special education status is collected, in addition to short- and medium-term outcomes, like standardized test scores prior to and during high school, attendance, and high school graduation. Then they use National Student Clearinghouse data to determine the number of semesters of college attended, if any, between high school graduation and the first quarter of 2018. They also match graduates to the Connecticut State Department of Labor’s employment data through the state’s P20 WIN initiative.

The first finding to note: Attendance at a CTHSS school had no effect on female student outcomes as compared to non-CTHSS peers. For male students, however, attendance at CTHSS increases high school graduation rates by 10 percentage points (relative to the sample average of 83 percent) and reduces the number of semesters ever enrolled in college by almost one half of a semester. For the full sample, CTHSS students see 44 percent higher total earnings and 32 percent higher quarterly earnings than their counterfactual sample means. CTHSS graduates’ earnings show a marginal decrease around age twenty-three, but are still a whopping 33 percent higher than the earnings of their non-CTHSS peers.

In discussing the potential mechanisms that yield these results, the researchers first point to higher motivation among students while attending CTHSS. Attendance rates at CTHSS schools are 1.7 percentage points higher than the counterfactual school, tenth grade test scores improve by 18 percent of a standard deviation, and math and English language arts scores improve by 13 and 16 percent of an SD, respectively. CTE coursework positively contributes to student outcomes, an effect boosted by the integrated experience of that coursework in the fully career-focused CTHSS schools. They also suggest that CTHSS students, and indeed students who take CTE courses in non-CTHSS schools, gain important general work skills that are in demand, readily marketable, and scalable with increasing experience. Finally, rather than seeing the earnings decline around age twenty-three as a negative, the researchers suggest it is an indication that older CTHSS graduates are pursuing formal college or advanced certification once they are more financially secure.

Overall, the effects of CTHSS attendance and graduation seem undoubtedly positive for the young men participating. But the lack of any positive effects for young women is concerning. If acquiring general and marketable work skills is the key, why isn’t it working for girls? One explanation could be that efforts to boost college enrollment and success among female students have borne fruit in recent years, which could help explain why CTE does not appear to be a positive experience for them. Even those young women graduating from CTHSS may simply be moving on to formal higher education, as if a career high school is the same as any other secondary educational track. Or perhaps it’s not that career and technical education is good for boys, but that general education is bad for them. Whichever the case, we cannot look askance at the CTHSS model, which does appear to be working very well for many young men as a springboard toward higher earnings. Making sure that more girls can gain the same marketable skills would be icing on the cake.

Olivia Piontek was a development associate for the Thomas B. Fordham Institute, where she manages Fordham’s grants, oversees progress on and assists in strategy creation for meeting internal and external goals, and facilitates communication between Fordham staff and funders. Piontek also plays a key role in planning and managing all Fordham events. Hailing from Missouri, she earned her master’s in public affairs from the…