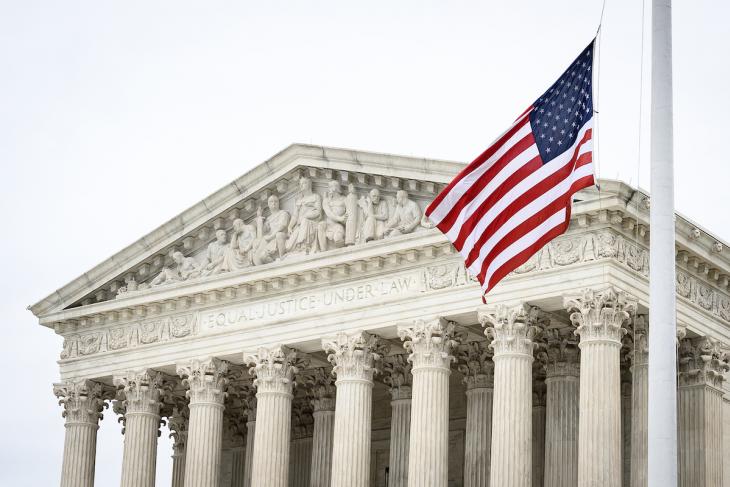 The education world was slow on the uptake, but oral argument this week in the case of Espinoza v. Montana Department of Revenue prompted a flurry of coverage underscoring the fraught emotions and complexities at play in what is arguably the biggest education case to come before the U.S. Supreme Court in a half century. Forty odd years in the making, the gradual shift—from seeing aid to religious schools as a violation of the Establishment Clause to today’s case challenging Blaine Amendments as an impediment to the Free Exercise Clause—is nothing short of remarkable. For supporters of school choice, it could be the final stroke that fells the wall restricting government funding for religious schools—and in the process, do more than any previous effort to ensure schools seriously attend to the social and emotional well-being of our nation’s children.

To wit, lead plaintiff Kendra Espinoza, a single mother with two daughters, laments that public schools are restricted to giving her children only half the answer: “They are taught to behave and to be good. But why? Nothing comes from a values perspective, and I really wanted that faith-based curriculum.” Parents like Espinoza recognize what SEL champions often don’t: that SEL and religious ideas go hand in hand. As University of Arkansas’s Jay Greene explains:

Religion helps students understand why they should be concerned with others, why they should exert effort, and why they should be honest, punctual, and diligent. Religion is not the only source of personal mission or respect for the dignity of others, but it is clearly the most widespread and longest-standing…. To abandon morality and religion when trying to teach SEL is to abandon almost every established instructional tool at our disposal.

By refusing to acknowledge SEL’s moral and religious roots, public schools are trying to instill things like self-efficacy and impulse control with one hand tied behind their backs.

Stricken by SEL fever, they remain undeterred, but it remains to be seen whether they can successfully square this circle. Indeed, if educators and policymakers are serious about the push for SEL, expanding access to high-quality private schools would seem like an obvious lever to pull.

Unfortunately, the battle over vouchers and school choice is a long-running feud, and the benefits of a ruling in favor of the plaintiffs are far from readily apparent to all. Undergirding the arguments against Espinoza is the oft-repeated objection that “I don’t want my tax dollars funding beliefs I do not share.” The American Federation of Teachers typifies the sentiment:

The case [is] a dangerous attempt to mandate taxpayer support for religious schools, where students may learn intolerance of other religions, be indoctrinated against sexual preferences and gender identities, and be encouraged to reject science in favor of creationism.

Implicit in this line of reasoning is that public schools are unbiased and values-neutral. This guileless naiveté belies the truth of the matter, which is that schools are, in the words of my colleague Robert Pondiscio, “culture-forming machines” and anything but ideologically impartial. Failure to acknowledge this simple reality prevents us from understanding and being transparent about the explicit and implicit values that drive every school, public and private.

Consider some of the many flashpoints in today’s culture wars. From prayer in schools and the 1619 Project to sex education and transgender bathrooms, is it even possible to take and teach from a position of neutrality? No matter how well intentioned one might go about it, we Americans don’t all believe in the same things. I’ve now seen this from both sides of the equation: first as a teacher and principal, and now as a parent. What I’ve come to appreciate is that schools cannot be neutral—and we should stop pretending otherwise.

Finally, there’s something disconcertingly dishonest about claiming that public schools protect students from religious indoctrination while war is being waged in schools across the country over hot button issues like gender identity and school-sanctioned walkouts. Parents can see through the thinly veiled, state-sponsored ideological positions that frequently elude district mandarins. In fact, a map illustrating the conflicts engendered by this obliviousness looks like a bad case of the measles. Students are left caught in the middle of these zero sum food fights.

Based on the questions raised during the argument, the Court’s decision, which is expected by this summer, likely hinges on the votes of Chief Justice John Roberts and Justice Stephen Breyer. Two of the key questions raised were whether parents have standing in the case and what the broader implications of a ruling for parents might be. But regardless of who prevails, the Espinoza case alone will not be dispositive on the merits of private school choice. The issues involved are too deeply polarizing and personal, and that’s without the added controversy provided by this being the current administration’s marquee education issue. Yet if we’re serious about placing morality and values back at the center of education reform, it’s senseless and self-defeating to keep faith-based schools out of the conversation.