The colossal urban district is now more legend than reality, at least for Ohio’s city schools. While some may lament the decline of Ohio’s big-city districts, might not the “downsizing” of the traditional district present a terrific opportunity to do education differently?

Consider the two charts below. The first chart shows the K-12 enrollment of these eight districts at four points in time: 1980, 1990, 2000, and 2010. The second chart displays the percentage of white students enrolled in these 8 districts for these same four years. For illustration the enrollment numbers for Cleveland, Columbus, and Dayton (Fordham’s hometown) are displayed. 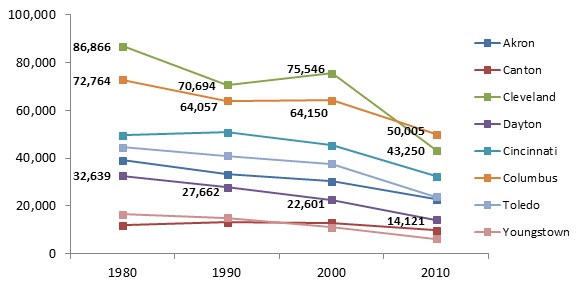 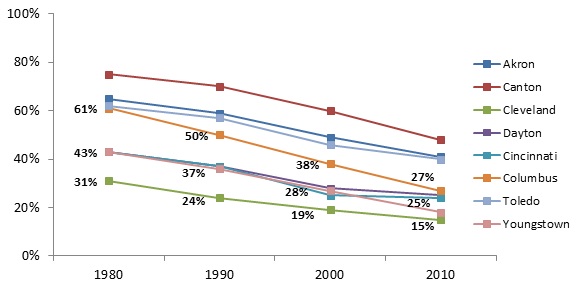 The  era of large urban districts is clearly ending, and there have been significant demographic changes within them. But what is the destiny of these 8 districts?

In my view, the fate of these districts hinges on two things, primarily. First, these districts must change organizationally, as they become smaller. Indeed, can they take advantage of their own “downsizing,” and use it as an opportunity to become smarter, nimbler—and better? Can Ohio’s Big 8 create distinct, focused schools that prioritize educational quality over centralized procedures and programs? (See Paul Hill, et al’s High Schools with Character and our own Needles in a Haystack reports for exemplary high-quality urban schools.) In fact, is there even a need for a central office and bureaucratic procedures?

Second, given their changing racial demographics, Ohio’s Big 8 districts have to focus on raising the achievement of black children. The black-white “achievement gap” is substantial. In 2012-13 for example, 87 percent of white children passed their 3rd grade reading exam, while only 61 percent of black children passed. The gap is wider in math. Raising student achievement will take a whole-city effort. Can black and white residents work jointly to the education of black students, together providing the resources and the supports their schools and students need? Can the Ohio 8 urban districts cultivate a talented and racially diverse teaching force?[1] Can inner-city schools create healthy learning environments, opposite from the “code of the street” cultures that have ruined too many young black lives?

Neither the destiny of urban districts nor of the children who attend them is etched in stone. Ohio’s urban school districts can seize their own destinies. It’ll take a willingness to change, however. To their credit, some Ohio cities (Cincinnati, Cleveland, Columbus) have taken the first steps in overhauling their school districts. Will Dayton, Akron, and Ohio’s other cities follow suit?

[1] Cleveland and Dayton’s teachers were two-thirds white; Columbus was 77 percent white. Though the research is contentious, there is some evidence that minority students learn more when they have a teacher of their own race.