If you thought whole-language reading instruction had been relegated to the scrap heap of history, think again. Many such programs (proven to be ineffective) are still around, but they're hiding behind phrases like "balanced literacy" in order to win contracts from school districts and avoid public scrutiny. Louisa Moats calls them out in Fordham's new report, Whole-Language High Jinks.

Moats, a psychologist and widely respected authority on early reading, authored a previous Fordham report in October 2000 called Whole Language Lives On. In it, she revealed that what was going on in many classrooms in the name of "balance" or "consensus" was harming students.

Seven years later, such programs still exist-and still try to pull the wool over educators' eyes. Worse, major school systems, including Denver, Salt Lake City, and New York City, continue to adopt them, misled by materials that "talk the talk," touting the five elements of effective reading instruction identified by the National Reading Panel, but which are actually just whole-language programs in disguise. 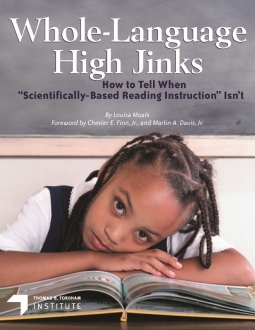