Sweating the Small Stuff: Inner-City Schools and the New Paternalism

The most exciting innovation in education policy in the last decade is the emergence of highly effective schools in our nation’s inner cities, schools where disadvantaged teens make enormous gains in academic achievement. n this book, David Whitman takes readers inside six of these secondary schools—many of them charter schools—and reveals the secret to their success: They are paternalistic.

The schools teach teens how to act according to traditional, middle-class values, set and enforce exacting academic standards, and closely supervise student behavior. But unlike paternalistic institutions of the past, these schools are warm, caring places, where teachers and principals form paternal-like bonds with students. Though little explored to date, the new paternalistic schools are the most promising means yet for closing the nation's costly and shameful achievement gap.

Fordham held a book talk for "Sweating the Small Stuff" on September 3, 2008. Watch the video here. 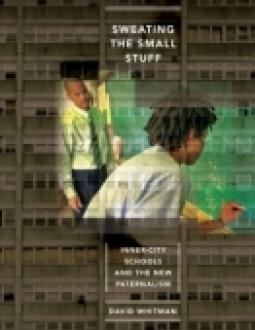 David Whitman covered social policy for U.S. News &amp; World Report for nearly two decades, from 1985 to 2003. His articles have appeared in the New York Times, Wall Street Journal, Washington Post, the Atlantic, New  Republic, and numerous other publications. Since leaving U.S. News in 2003 to embark on a career as a freelance author and editor, Whitman has written widely on education, as well as environment and…