At first glance, the explosive growth of "alternative" teacher certification--which is supposed to allow able individuals to teach in public schools without first passing through a college of education--appears to be one of the great success stories of modern education reform. From negligible numbers twenty years ago, alternatively prepared candidates now account for almost one in five new teachers nationwide. That's a "market share" of nearly 20 percent. As longtime supporters of alternative certification, we should be popping champagne, declaring victory, and plotting our next big win, right? Not so fast. As the old cliché says, if it looks too good to be true, it probably is.

"Alternative Certification Isn't Alternative" reveals that alternative certification programs, contrary to their original mission, have not provided a real alternative to traditional education schools. In fact, they represent a significant setback for education reform advocates.

Here are the report's main points:

In short, policymakers, reform advocates, and philanthropists who think they have "won" the battle in favor of alternative certification should think again. Twenty-five years later, concerns about the quality of education schools remain--as does the need for bona fide alternatives: swifter, better, surer, cheaper ways to address teaching aspirations on the one hand and workforce quality and quantity problems on the other. So put away the champagne. Much heavy lifting lies ahead.

In A Nutshell brief of the report 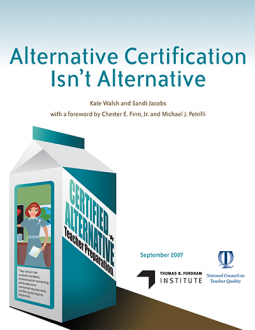 Kate Walsh is president of the National Council on Teacher Quality (NCTQ). Prior to NCTQ, Walsh worked extensively on education reform in both the public and private sectors, including, The Abell Foundation, Baltimore City Public Schools, the Core Knowledge Foundation and as founder and director of The Baraka School, an internationally recognized boarding school in Kenya established to educate at-risk boys from…

Sandi is Vice President for Policy at the National Council on Teacher Quality. Most recently she worked at the U.S. Department of Education as a Senior Education Program Specialist for the Reading First and Comprehensive School Reform Demonstration programs. Prior to that, she taught 4th and 5th grade for nearly a decade at Public School 9 in Brooklyn. Ms. Jacobs was a Presidential Management Intern and a charter corps… 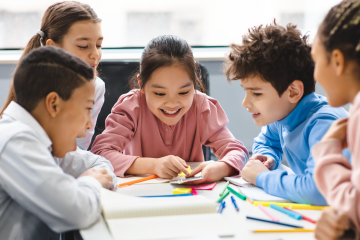 School funding imperatives for Ohio’s next budget: Toward a more efficient, productive, and transparent system