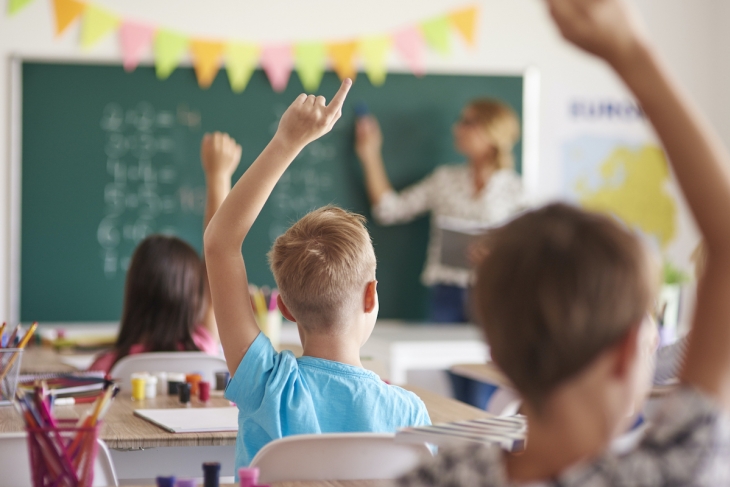 Editor’s note: This post was first sent as an email in The Bulwark’s newsletter “The Triad: Three things to read, from JVL.”

Right on schedule, the national school panic is here.

Most of the country is supposed to go back to school in September. Parts of the country go earlier. Nobody has any idea what they’re doing or what’s actually going to happen.

Let’s lay out some guide rails for how to think about schooling in the pandemic, because there are some universal truths worth keeping in mind:

Here are some basic facts that make figuring out school protocols extremely hard:

For starters, even talking about “school” as a singular entity is a mistake.

As an epidemiological matter, there is a world of difference between large schools and small schools, between small children and high schoolers. It makes no sense—none—to assume that the same best-practice for a room that houses a dozen five-year-olds in daycare will be the same for a high school with 3,000 students.

And there are going to be large-scale geographic differences, too. On July 4, Vermont had two new cases diagnosed and Florida had 11,458 new cases. Why should we think that best practices for these two states would be the same?

That’s obviously a good thing. But the health of the kids in school is only one part of the equation. The other is the spread of the virus. Because a kid who picks up the infection and brings it home is going to put others at risk, even if her own chances of dying are quite small.

If a family has someone over the age of fifty in the house, that’s a problem. If someone in the family is immunocompromised, that’s also a problem.

So different families will have different levels of risk.

And by the same token, different families have different needs. Just off the top of my head, here are three scenarios in which what a family needs to get out of schooling are radically different:

(1) A two-parent family in which one parent stays home and the other parent can telework has a very high level of flexibility. Maybe they can manage remote-learning with a high degree of success and a relatively small economic burden.

(2) A single mother who cannot telework and has to report to a workplace for forty hours a week. How is she supposed to manage if her kids aren't physically at school for eight hours a day?

(3) A family with a special-needs child [with significant challenges] for whom school isn’t about working towards college admissions but about early intervention to help them manage their challenges. For them, remote learning may be impossible and what the child misses from school is the critical help from a team of people who are experts in special ed.

Now overlay the different risks that families have with their different needs and you start to see, again, how it will be nearly impossible to have a one-size-fits-all protocol for opening schools.

And here I cannot stress this enough: Anyone who says either “You must open all the schools like normal” or “You cannot open any schools at all” is either foolish, or hysterical, or pushing an agenda.

You can see what I’m trying to get at here: There is no one “right” way to do school in this environment.

Mind you, I don't have the answers either. But I do have some general thoughts as to what answers will look like. Here are five broad precepts—concessions to circumstances, really—that ought to guide our thinking.

This is the most important precept.

Every school needs to have at least three plans at the ready. One for something that looks like full opening, one for partial opening, and one for fully remote classes. If I had my druthers, I’d also want options broken out separately for elementary, middle, and high schools. And I’d want a totally separate array of options for non-mainstreamed special education.

School systems should also build in the flexibility to switch between options as circumstances warrant. If you’re in Vermont, maybe full-open works well for your district. But if your town has a spike of cases, then you have to move to another mode.

By the same token, if you’re in a Florida town where the virus is out of control in September, maybe you have to start out with full-remote schooling. But that doesn’t mean you have to stay in that mode for the entire year.

An acceptable risk for one family might be too much for another, so school systems should expend a lot of effort accommodating families. So for instance, if a school is running at partial-open and a family wants to do full-remote, there ought to be ways to make that work.

(3) An acceptance of “good enough”

Let’s just all agree, at the start, that this will be a weird school year. No one is going to get through their normal curriculum. There will be subjects that get left out or only partially covered.

And when the 2020–2021 school year comes to a close and Jimmy and Susie aren’t as far along as they should be, guess what?

The world isn’t going to end.

At the elementary level, the truth is that kids need very little other than reading and math. Middle school is largely just table-setting for high school, so if everyone is short-changed by the same amount, then the kids will be fine. And as you get into high school—particularly the higher AP levels—the kids will be more equipped to learn through textbooks and lectures. Which is what college will be like for them anyway.

We could have a whole debate on whether or not this is a good thing (I vote “no”) but for the purposes of the 2020–2021 school year, we ought to just press pause on the whole thing by having everyone go to pass/fail. Grades are going to be meaningless in this environment anyway; they would all require an asterisk. Schools ought to recognize that explicitly.

“Education” isn’t a monolith. Its purposes are part childcare, part credentialing, and part genuine learning. And a lot of times that last part is the junior partner in the arrangement. By going to pass/fail, schools can put more emphasis on the learning portion this year, in whatever configuration the school year looks like.

And we all need to be patient with each other.

Jonathan V. Last is the Executive Editor of The Bulwark.