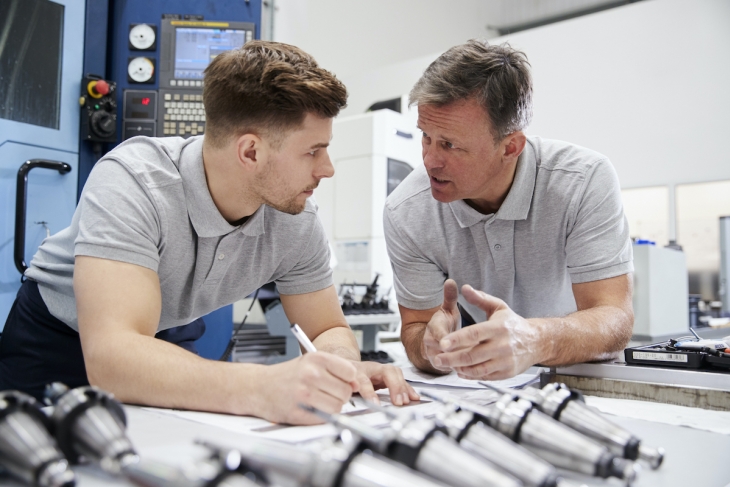 A skills gap occurs when the demand for a skilled workforce increases faster than the supply of workers with those skills. As the U.S. economy recovered from the 2008 Great Recession, that gap was evident in many economic sectors. As a result, large swaths of people were underemployed while higher-paying jobs went unfilled. Formal education has traditionally played a part in boosting young people’s skills, especially four-year colleges, but what of workplace education? A new study from the National Bureau of Economic Research (NBER) explores the idea that on-the-job skills acquisition could be just as valuable as a bachelor’s degree in filling the skills gap.

Analysts identify workers without bachelor’s degrees who are potentially skilled for higher-wage work through work experience. They use data on the skill requirements of jobs in the O*NET database, a comprehensive collection of occupational information, to compute the “skill distance” between a worker’s current occupation and higher-wage occupations with similar skill requirements in their local labor market.

They also use the Current Population Survey (CPS) to sample the worker population, since it is a monthly household survey that provides loads of labor force and economic statistics. For each worker in the CPS under a declared occupation—which totals roughly 68 million workers—they match the O*NET skill requirements for that same occupation to the worker. Then based on the skills of the current population, they estimate the degree of similarity or relatedness between the skills needed for the worker’s current job and those needed for one or more higher-wage jobs; the distance between those two points is the skills gap.

Still, having higher-level skills and accessing higher-level jobs are two different things. To identify feasible pathways to higher-wage jobs, analysts consider those that meet four requirements: they currently employ some workers without bachelor’s degrees; the skills they require are close to those required by workers’ current lower-paying jobs; in recent years, they have hired workers from those jobs who did not possess a bachelor’s degree; and they pay higher average state-cohort median wages than those jobs. They break down the non-degree-holding workers into several categories based on their skill levels—which translates into their ability to move up—and then compare their skills to those of workers in the higher-level jobs.

Predictably, the skills gap between workers’ current jobs and those that pay more varies by occupational category. For example, roughly 40 percent of jobs held in the Personal Care/Service category—which has the lowest national median income—impart on-the-job skills that only prepare workers for jobs within that same low-paying category. Thus, there’s substantially less room for wage increases. Yet 20 percent of Personal Care/Service jobs prepare workers for positions in other, higher-paying categories, such as Educational Instruction or Office and Administrative Support.

To be sure, the classification of skills and the size of the gaps between them in this study is not an exact science. But with any luck, the unparalleled athleticism of LeBron James and Lionel Messi should net out similarly in such an exercise—although there’s a problem if it suggests La Pulga should go to the NBA.

In the end, we can’t ignore the very real data showing some hiring trends could favor non-degree-holding candidates, or the suggestion that there are more routes to upward mobility than college. So let’s be open to the possibility that in-demand jobs might be filled from the ranks of skilled, hard-working lower-wage workers—not only from the ranks of “the B.A. Cartel.”