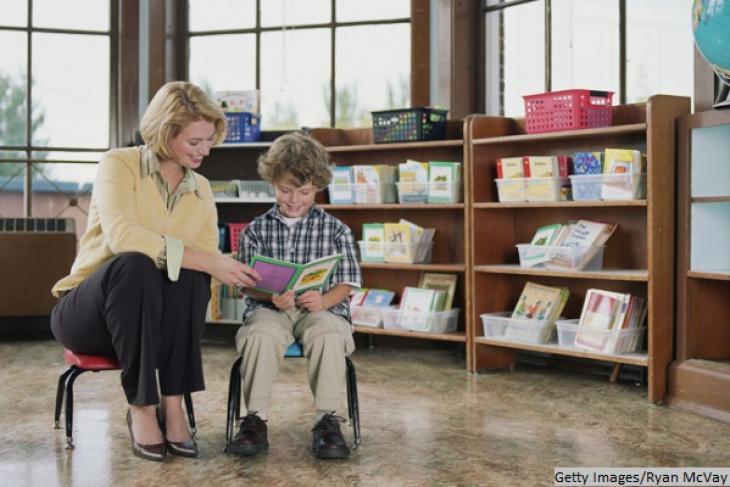 Every teacher of low-income children and English language learners has had this moment: You're sitting with a student, working line by line through a text, grappling with what should be fairly simple comprehension questions.

This is what reading failure often looks like in a struggling school. A child can read the words on a page in front of him, but he can't always make sense of them. The commonsense solution for both teachers and policy makers has been to make more time for reading instruction. That makes sense, but it hasn't worked, because reading comprehension is not a skill that can be practiced and mastered like a basketball free throw. Children's ability to understand what they read is intimately intertwined with their background knowledge and vocabulary. If a child is not broadly educated, he won't be fully literate.

John King made precisely this point last Thursday in a remarkable speech in Las Vegas. The newly minted secretary of education is pushing for schools to take advantage of the Every Student Succeeds Act (ESSA) to give every child the kind of broad background "that engages and intrigues kids, allowing them to discover interests in the arts and the sciences and world languages and so much else." He also touched on another reason why a rich and varied education is critical: It's how you build a reader.

If there's ever been a case of "wrong for all the right reasons," it's the laser-like focus on reading and math that has been the hallmark of schooling for the last few decades and was enshrined in education policy under the No Child Left Behind Act. There's a surface plausibility to the idea that nothing matters more than reading, but we've followed this well-intentioned idea off a cliff.

When I was a new teacher at P.S. 277 in the South Bronx, fewer than 20 percent of my fifth graders scored at proficient levels in reading. There was no shortage of explanations: poverty, low expectations, lousy teachers. Kids weren't engaged; they didn't have the opportunity to partake in "authentic" reading and writing that reflected their lives and interests. But one man’s work explained precisely what I was seeing in my classroom every day.

In 1987, E.D. Hirsch published Cultural Literacy. The book was an out-of-nowhere blockbuster that spent most of the year on the New York Times bestseller list, largely on the strength of the book's list of five thousand people, events, books, and concepts that Hirsch claimed were an integral part of a well-rounded education. It sparked an important debate about what every American should know, but Hirsch's main point was lost: Language proficiency rests on a common body of knowledge. The words we read, write, speak, and hear are the visible tip of a verbal iceberg. Meaning comes from what's beneath the surface—and inside the recipient's mind. To understand one another, writers, readers, speakers, and listeners need more in common than twenty-six letters of the alphabet and the words they form. They also need common context. The phrase "Dickensian squalor" means nothing unless you know a little bit about Charles Dickens and his novels, for example. Literate people know things and assume their readers do as well. When they don't, meaning suffers. They read it. But they don't get it.

The importance of shared knowledge in our economically and culturally diverse country cannot be overstated. Accordingly, King framed his call for a well-rounded education as a matter of "educational justice." Too often, he noted, "It's kids from low-income families and kids of color who start out on the wrong side of those word gaps. Frequently, they are the ones who may miss out on a wide range of experiences, from museum visits to travel. And too often, they are the ones who lack access to a wide range of challenging courses once they get to school." This is precisely correct.

There was no conspiracy to deny low-income children and kids of color a fulsome education, but the results would be the same if there had been. Educators interpreted poor academic performance as the inevitable effect of poverty outside of school and a lack of curricular relevance and student engagement inside the classroom. Policy makers interpreted low performance as low expectations, poor teaching, and a lack of urgency. And we all agreed that science, history, art, and music are all well and good, but resolved mostly to first make sure that all the kids could read. King's speech is a critical and long overdue call to re-examine our assumption about education's thorniest problem: why it's been so damn hard to raise reading achievement even as we focused more effort on it.

Significantly, the secretary did not shy away from discussing the role that testing has played in narrowing the focus of schools to reading, math, and not much else. Done well and thoughtfully, testing provides vital information aimed at ensuring equity. "But in some places, an exclusive emphasis on the tested subjects drove a narrowing of what was taught and learned," he noted. "There is a lot of reason to believe that students are not getting the instruction in science, social studies, the arts, and world languages that they need."

The secretary cited one study that found students spending only about twenty minutes each day on social studies and little more on science. "I count myself among those who worry that the balance has shifted too much away from subjects outside of math and English, subjects that can be the spark to a child's interest and excitement, are actually essential to success in reading, and are critical to a child's future." King also correctly noted that "decades of research from folks like Daniel Willingham at the University of Virginia illustrate that students with broad knowledge are actually stronger readers." Most significantly, the new secretary noted that the Every Student Succeeds Act—passed by Congress and signed by the president last year to replace the unlamented No Child Left Behind—means "the opportunity to widen how we understand educational excellence is suddenly ripe."

That's why King's words matter. He read the research, the data on curriculum narrowing and the unintended consequences of test-driven accountability practices.