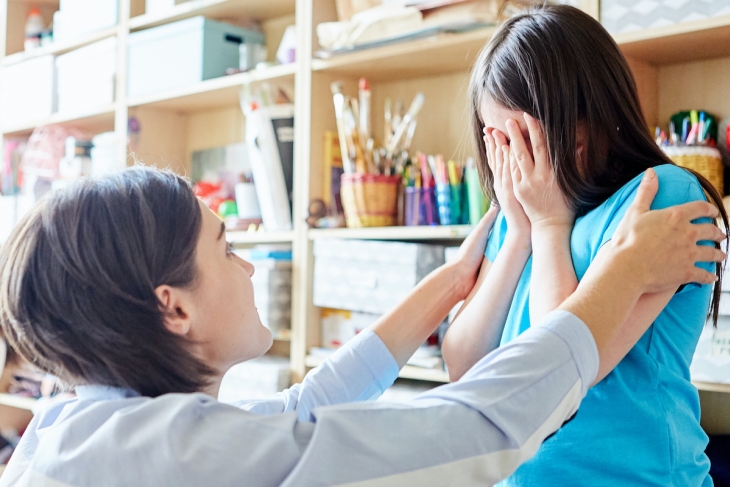 Early reporting of suspected maltreatment is one key to mitigating the damage that abuse can inflict on a child. Yet with millions of school age children having their classroom time shortchanged due to the coronavirus, a primary source of detection for maltreatment has been cut off—teachers. Service providers are justifiably concerned with drops in the number of abuse referrals, as are medical professionals with the increased severity of abuse cases they have witnessed in recent months. A timely report from NBER reiterates just how vital schools are in detecting and breaking these horrific abuse cycles.

Statistics show that around 13 percent of all children in the U.S. have a confirmed case of maltreatment by age eighteen. According to federal law, maltreatment is “any recent act or failure to act on the part of a parent or caretaker which results in death, serious physical or emotional harm, sexual abuse or exploitation; or an act or failure to act, which presents an imminent risk of serious harm.”

The NBER analysts use two separate regression discontinuity designs. The first uses data from thirty-five states collected between 2003 and 2015 about child maltreatment as reported to the National Child Abuse and Neglect Data System (NCANDS) Child File. Specifically, these are referrals made to Child Protective Services (CPS) that are assessed to see if they merit further examination and, if so, whether they can be substantiated. Over that period, there were roughly 48 million reports of child maltreatment. In over 90 percent of cases, the child’s parent was the perpetrator. The most common form of abuse is neglect, followed by physical abuse.

The report utilizes statewide policies across states and over time regarding the earliest age at which a child is allowed to enter school. Researchers are testing whether the investigated reports of child abuse for five-year-olds to CPS, in particular, are greater for children born just before the statewide school entry eligibility cut-off date (they enroll in kindergarten in the year they turn five) relative to those born just after the entry eligibility cut off (they enroll in the next year). In other words, the study design leverages the fact that a child’s exposure to educators varies during the child’s fifth year of life based on being born on adjacent days. Still, schools and districts do not always follow these age-based admissions policies to the letter, so the results are essentially “intent-to-treat” estimates.

The headline is that they find an increase between 5.4 and 9.2 percent in reported instances of child maltreatment. Assuming that this is all new reporting (a different child on each report), that means 0.3 percent of five-year-olds are being newly reported to CPS agencies because of their kindergarten eligibility. They look at the types of reporters and show that school-based contact increases the number of first reports for a child, as well as the number of additional reports that confirm prior cases of suspected abuse.

The second discontinuity analysis uses variation in school calendars (annual start and end dates) set by districts to identify effects of exposure to school settings on child abuse reporting. This is similar to the first analysis, as the researchers are testing whether the number of reports is greater when children are attending school compared to dates when they are not. They use data from the twenty-five largest districts in the country, gleaning start and end dates from 2005 through 2016. They include all children from ages six to seventeen. In a nutshell, they find that reports to CPS go up between 48 and 64 percent at the start of the school year and also peak one month before the school year ends—almost as if educators are responding to the fact that students will soon be out of their sight for three months—but there is a decrease when school actually ends. While educators are responsible for between 33 and 41 percent of CPS reports in this analysis, about half of them originate from social service, mental health professionals, or others. The researchers suggest this is due to the wider age range of the sample, with older children having more contact with other adults on high school campuses.

The report reiterates that teachers play a key role in reporting child abuse, and rightly calls for their proper training to identify abuse, given the very uneven reporting across the country and in school districts. But the more urgent question poses an uncomfortable trade-off between the health of all children in schools and, in particular, those at risk of abuse: What if many schools don’t reopen in the fall due to ongoing coronavirus concerns?