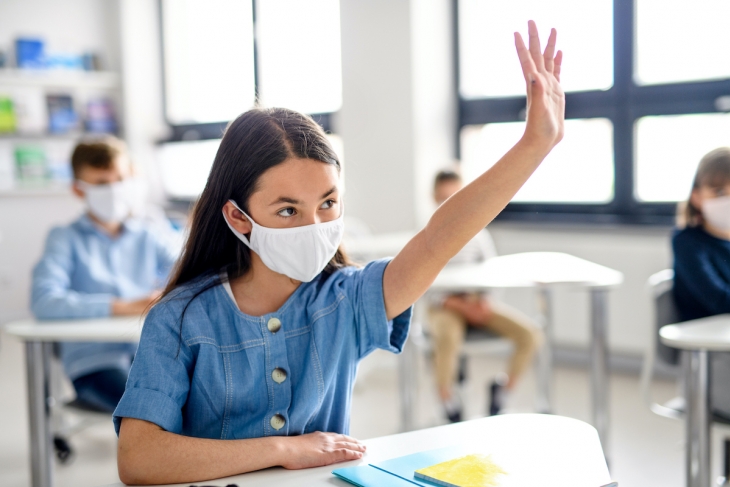 There used to be two sureties when it came to American K–12 education: Kids would attend school, and school leaders would demand more money. This fall, with half the nation’s schools shuttered and school districts paying bus drivers to drive empty routes, the first is no longer a given. But the budgetary demands continue unabated.

Indeed, this summer has been filled with school and teacher-union leaders demanding billions to help schools weather Covid-19. But it’s not like these demands are anything new. More than a year before the coronavirus struck, United Teachers Los Angeles president Alex Caputo-Pearl urged teachers to strike in order “to get the basics for [Los Angeles] students.” He neglected to mention that the district was spending $18,788 per student, average teacher pay was $78,962, and the cost of employee benefits had grown an astounding 138 percent between 2001 and 2016.

In May, New York City schools chancellor Richard Carranza told the city council, “We are cutting the bone. There is no fat to cut, no meat to cut.” He failed to mention that his district spent an extraordinary $28,900 per student in 2019, according to the city’s Independent Budget Office, or that he had added 340 positions to the central bureaucracy and borough offices in 2019.

In truth, the U.S. spends more than $700 billion on K–12 education a year, or about $14,000 per student. That’s 39 percent more than the average OECD nation. And many big-city districts spend considerably more, with per-pupil outlays of more than $20,000 per year in places such as Washington, D.C., and Boston.

While teacher-union leaders and Democratic politicians frequently suggest we’ve just been through two decades of “school disinvestment,” after-inflation funding actually increased by 27 percent between 2000 and 2016. But it’s not clear that we’re spending all of this money in effective ways. For instance, as researcher Ben Scafidi has documented, the ranks of non-instructional staff have grown more than twice as fast as student enrollment over the past thirty years.

In any event, the combination of school closures, plunging enrollment, and economic dislocation has made this an extraordinarily good time to rethink school spending. It just so happens that, last fall, we recruited a double handful of sharp analysts and budget thinkers to explore how schools could spend smarter.

There are at least four places where such efforts should start:

1. Pensions and benefits: Across the land, some big-city school districts will soon be spending a third or more of their annual outlays on retirement and benefits. In Los Angeles, to take one instance, benefits are projected to consume fully half of all school spending in a decade’s time. Schools should start enrolling future teachers in new retirement vehicles, while asking new staff to pay a share of their health-care costs more similar to that paid by other workers. Such an approach could permit states and districts to shift billions out of future obligations into today’s classrooms, boost actual take-home pay by 15 percent or more, and make teachers active participants in containing costs.

2. Staffing: Schools spend too much on employees who work outside of classrooms and too little on the teachers who actually educate students. They should shift away from the one-teacher-one-classroom model, and toward a model where educators fill a variety of crucial roles, led by the most experienced and accomplished staff. These leaders would split their time between teaching students directly and doing what many of those out-of-classroom hires do: overseeing, aiding, and directing the instruction of their colleagues. This could be an opportunity to routinely pay veteran educators six-figure salaries with the dollars recaptured from bloated bureaucracies.

3. Technology: American schools have a long-running, unrequited love affair with education technology. And, of course, technology has been front-and-center during Covid-19. But, too often, the focus is on gadgetry rather than impact. What’s needed is an inclination to use technology to augment and complement classroom teaching. Technology can give students the opportunity to practice new skills, perform experiments in virtual environments, and have one-on-one visits with teachers and counselors—even when the logistics don’t permit in-person contact. Schools must be redesigned to take advantage of these tools.

4. Operations: In education, faddish enthusiasms and “ambitious” reforms leave too little time for sweating the small stuff that can add up to a big difference for students. Whether it’s reducing outlays for substitute teachers, controlling line-item construction costs, outsourcing janitorial services, or streamlining procurement, there are myriad opportunities to bring outmoded district routines into the twenty-first century. Miami-Dade, for example, used the Great Recession as an opportunity to trim administrative staff by 55 percent—without any adverse impact on student achievement. That kind of leadership should be the norm.

It’s a truism that more money generally helps in life, and there are surely schools and school systems where more funds are needed. At the same time, especially in public bureaucracies, new dollars often double as a convenient excuse to avoid hard choices. Whether or not more aid is coming, it’s time for educational leaders to focus as intently on how they spend each dollar as on how many dollars they get.

Editor’s note: This was first published by National Review.

Frederick M. Hess is a resident scholar and the director of Education Policy Studies at the American Enterprise Institute (AEI), where he works on K–12 and higher education issues. He is the author of Education Week’s popular blog “Rick Hess Straight Up,” is a regular contributor to Forbes and The Hill, and serves as the executive editor of Education Next…