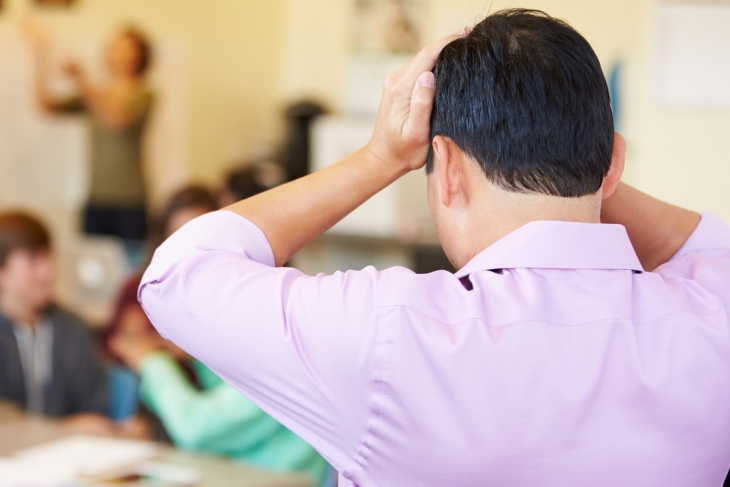 Any day now, Catherine Lhamon, the assistant U.S. secretary of education for civil rights, is expected to release new guidance for school districts, telling them how to handle racial disparities in suspensions, expulsions, police referrals, and other touchy discipline issues.

It couldn’t come at a worse time.

According to news stories from around the country, including Erica Green’s searing portrait in the New York Times of a Pennsylvania steel-town’s high school, the confluence of multiple crises has turned our schools into a tinderbox. Green writes:

Three hours into a recent Monday morning, blood had already been spilled in a hallway at Liberty High School. With his walkie-talkie in hand, the principal, Harrison Bailey III, called on the custodial staff to clean up the remnants of a brawl while hurrying to the cafeteria in hopes of staving off another.

This is how Dr. Bailey has spent many of his hours since the school welcomed back its 2,800 students for in-person learning in August: dashing around the 400,000-square-foot building, outrunning bells and crowds of students, and hoping that his towering presence will serve as an inspiration to pull up masks and a deterrent to other, less obvious burdens that his students have had to contend with since returning.

Like schools across the country, Liberty has seen the damaging effects of a two-year pandemic that abruptly ejected millions of students from classrooms and isolated them from their peers as they weathered a historic convergence of academic, health and societal crises. Teenagers arguably bore the social and emotional brunt of school disruptions.

Some analysts argue that cases like Liberty are isolated examples, not typical of anything. As the adage goes, the plural of anecdote is not data. Unfortunately, we don’t have real-time information to tell us whether there’s been a widespread increase in student misbehavior since schools reopened nationwide this fall. Such data lag by at least three years.

But beyond high-quality reporting we have many reasons to believe that Liberty is no outlier. We know that American adolescents are experiencing a serious mental health crisis, one driven by school shutdowns, social isolation, two years of unfettered screen time, the trauma of losing loved ones to Covid-19, and the economic stress of the plague era. We understand that kids who experience trauma at home are more likely to act out in classrooms and corridors. We know that incidents of hostile student behavior were on the rise even before the pandemic. And we see that the world outside school is also going berserk, with murder rates in many big cities at thirty-year highs, and—less seriously but more commonly—Americans losing it on airplanes, at stores, and other places where people come together.

Frankly, it would be a miracle if student behavior wasn’t falling off the rails, given all this. Smart policymakers should hope for the best, but plan for the worst. That means grappling with what looks to be a bona fide crisis.

Into this precarious situation walks Assistant Secretary Lhamon, intending to reinstate an Obama-era policy limiting the use of suspensions and the like in the name of reducing racial disparities in “exclusionary discipline.”

Many analysts, myself included, have written ad nauseam about the problems with the Obama policy, but let’s cut to the chase. It embraced “disparate impact theory,” warning districts to expect an investigation by the department’s civil rights office if they suspended a disproportionate number of students of a particular racial group, regardless of whether members of that group misbehaved at higher rates than their peers. In particular, disproportionate suspensions of Black students were viewed as automatically suspect, even though Black students themselves report being twice as likely as their White peers to take part in fights at school.

This is sensitive stuff, no doubt, and goes right to the heart of today’s national debate about race. But viewing any racial disparities as prima facie evidence of systemic racism, as Lhamon and other cultural progressives do, ignores the effects of socioeconomic differences. Surely it’s the case that students growing up in poverty, with all the hardship and heartbreak it entails, are more likely to act up in school. Poor students are more likely to live in violent neighborhoods and face other traumas. Given that Black students are three times more likely than White students to live in poverty, is it that hard to believe that they might also be more likely to misbehave? Not because of their race, but because of everything related to growing up poor?

And that was before a horrific pandemic that exacerbated all the inequities in our society, including along racial lines. Myriad signals all point in the same direction, indicating that poor, Black, and Hispanic children have suffered the most over the past two years. They were more likely to have to try to learn from home for most of the 2020–21 school year; more likely to lack the wherewithal to do that effectively; more likely to fall behind academically; more likely to lose loved ones to Covid-19; and are now more likely to be suffering from mental health challenges.

So we shouldn’t be surprised to see more disorder in our schools this year, disorder that is most acute in schools serving lots of students living in poverty, students who are disproportionately Black and Brown. The problem is that nobody has come up with a sure-fire way to quickly reduce misbehavior and school violence that doesn’t involve removing disruptive students from classrooms and hallways. And so the very same students that have more catching up to do after a year of disrupted schooling are also facing the prospect of a more challenging learning environment if schools are hesitant to remove problem students.

We should also expect school administrators to struggle mightily with responding to these challenges. At Liberty High, according to the Times, the (award-winning) principal is dealing with suspension hearings practically every day. Meanwhile, practices that show some promise for reducing the reliance on suspension over the long term—like beefing up mental health supports, boosting teachers’ classroom management skills, and improving the culture of the school writ large—feel like pipe dreams today, given everything else that schools are dealing with, including severe staffing shortages.

My plea for Assistant Secretary Lhamon is to move with caution and show some humility. If she looks out across this vast nation, and from her office in Washington sees a school like Liberty High suspending lots of students of color, is she sure that it warrants a civil rights investigation? Or might administrators like Harrison Bailey be doing the best they can to respond to an awful situation? None of us knows for sure how to cope with this crisis, but we should start by assuming good faith on the part of front-line educators, who after all are the ones showing up to care for our students in their hour of need.

Editor’s note: This was first published by The Dispatch.