Why disparate impact theory is a bad fit for school discipline 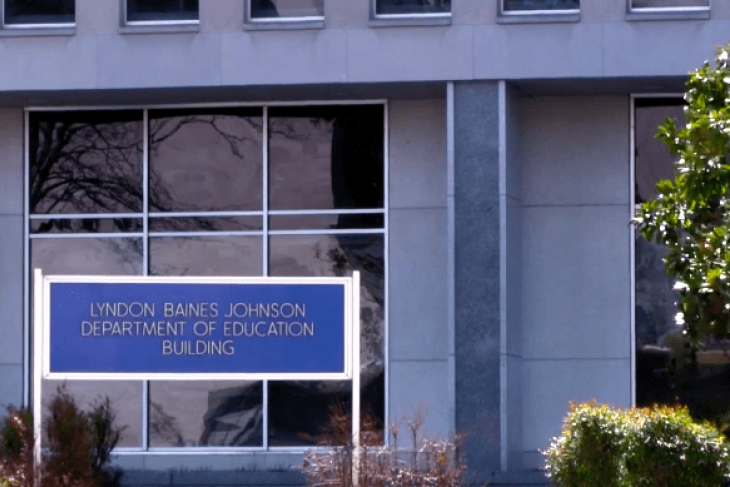 Editor’s note: School discipline reform has been the subject of several articles by Fordham’s Mike Petrilli in recent weeks. See this one for an overview of his concerns about the unintended consequences of top-down reform, and this one for ideas on where we might find common ground.

In 2014, in response to findings that African American students were three times as likely to be suspended as white students, the Obama Administration sent a lengthy “Dear Colleague” letter to school districts nationwide, spelling out a new policy on school discipline, motivated by disparate impact theory. It warned administrators that they could be subject to a federal civil rights investigation if their data showed significant racial disparities in the use of suspensions or expulsions, and could be found guilty of discrimination even if they had race-neutral discipline policies that were being applied even-handedly.

It’s this use of disparate impact analysis—and the threat of federal investigations based on discipline disparities alone—that gives many of us on the right such pause, and is why we believe the current administration should rescind or revise the 2014 letter. We worry that it will tie the hands of teachers and school administrators when it comes to maintaining discipline, possibly leading to greater disorder and even violence. We also worry that well-behaved students of color are most likely to suffer from the current approach. And we worry that it rests on a faulty assumption—that any racial disparity in discipline reflects discrimination rather than differences in student behavior.

The most relevant section of the 2014 “Dear Colleague” letter states:

Schools also violate Federal law when they evenhandedly implement facially neutral policies and practices that, although not adopted with the intent to discriminate, nonetheless have an unjustified effect of discriminating against students on the basis of race. The resulting discriminatory effect is commonly referred to as “disparate impact.”

Disparate impact theory originated in the world of labor law. The classic example comes from firefighting. For decades, many urban fire departments had been the exclusive province of whites, thanks to explicit discrimination against blacks and other people of color. Once civil rights statutes banned such de jure—i.e., legally enforced—discrimination, some fire departments came up with ways to maintain the discriminatory status quo, such as requiring applicants to pass standardized tests before being hired, tests that African American and Latino applicants tended to fail. Agencies and courts turned to disparate impact theory to probe practices like those, which may have been “facially neutral” but were intended to have, and did have, discriminatory effects. Fire departments had to justify their use of such tests as being relevant to the job. If they couldn’t, the tests were deemed unlawful by the courts.

The 2014 letter from the Education and Justice Departments brought a similar approach to bear in the realm of school discipline. When determining whether schools’ policies and practices are having an “adverse impact” on students, the feds would look at:

…instances where students of a particular race, as compared to students of other races, are disproportionately: sanctioned at higher rates; disciplined for specific offenses; subjected to longer sanctions or more severe penalties; removed from the regular school setting to an alternative school setting; or excluded from one or more educational programs or activities.

If policies did result in disproportionality—and thus had an adverse impact on certain groups of students—schools would have to justify them by proving to the Department of Education that their policies were “necessary to meet an important educational goal” and that there’s no “comparatively effective alternative policies or practices” that the schools could use instead.

Does student misbehavior vary by race and socioeconomic status?

The 2014 policy rested on a fundamental assumption: that differences in student behavior were not themselves driving differential rates of suspensions and expulsions. The letter stated that “research suggests that the substantial racial disparities of the kind reflected in the [Civil Rights Data Collection] data are not explained by more frequent or more serious misbehavior by students of color.”

But is that true? It’s virtually impossible for researchers to know because they can’t “see” student misbehavior, only records of disciplinary actions taken in response to misbehavior. (Maybe the ubiquitous use of cameras and the like will change that one day, for better or worse.) It is certainly likely that some of the disparities are being driven by the bias of teachers and principals, implicit or otherwise, as some studies suggest.

Furthermore, recent studies like this one from Arkansas are showing big differences in suspension rates across schools in the same district. It seems probable that some middle and high schools are taking a tougher approach to discipline than others, and some of these schools—“suspension factories” if you will—serve high proportions of children of color.

Yet just because student behavior doesn’t explain all of the suspension gap, that doesn’t mean it doesn’t explain some of it. And, as I argued a few weeks ago, it’s extremely likely that student behavior does in fact vary across different subgroups—not because of race, but because of the vastly different socioeconomic circumstances that children of different groups are facing. Kids growing up in poverty are more likely to experience trauma, to live without their fathers, to go home to more violent neighborhoods, and to otherwise face all manner of difficult circumstances that make it more likely that they may misbehave at school. As African Americans are three times more likely to grow up in poverty as white students (36 percent versus 12 percent, as of 2015), we would expect to see racial differences in student behavior, just as we see racial differences in achievement—which are not driven by race, but by socioeconomic differences.

To find out whether that’s the case, my colleague David Griffith took census poverty data from the new Stanford Education Data Archive and crossed it with data on out-of-school suspensions from the Civil Rights Data Collection.

Each dot in figure 1 represents one of the 120 largest school districts in the country, excluding those that have fewer than 1,000 white students or 1,000 African American students. 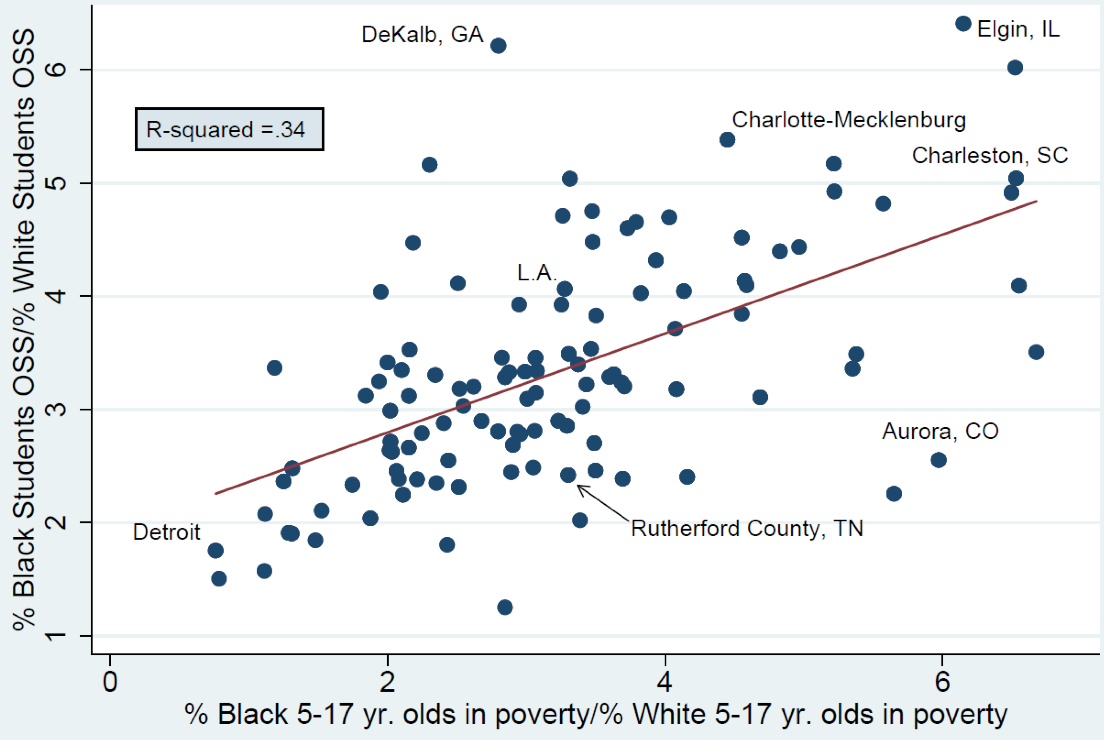 Sure enough there’s a strong relationship between the poverty gap and the suspensions gap, with differences in poverty explaining more than a third of the differences in discipline disparities from district to district. Maybe something else could explain this phenomenon, but it appears likely that poor students misbehave at higher rates than non-poor students, and in some districts poor students are much more likely to be black.

Where might we turn to find out whether misbehavior itself varies across different groups? How about the students themselves? One piece of evidence comes from the Centers for Disease Control and its Youth Risk Behavior Surveillance System. In 2015, high school students were asked if they had been in a fight on school property at any time in the past 12 months. African American students were 2.2 times more likely to say yes than white students—11.4 percent to 5.2 percent. (See table 13.2 in this 2016 Department of Education report.)

Table 1. Percentage distribution of ninth graders who reported going to class late in 2009-10 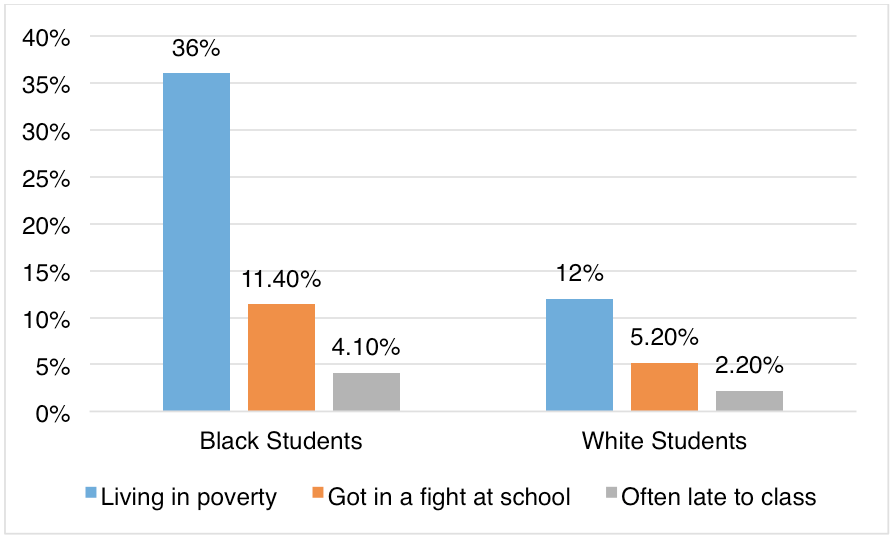 Is every school system in the country guilty of discrimination?

Imagine that you run a school system with pupil demographics that reflect national averages. Your African American students are three times likelier to live in poverty than your white students, are more than twice as likely to get into fights at school, and almost twice as likely to be chronically tardy to class. According to the 2014 “Dear Colleague” letter, if you suspend African American students at twice the rate of white students, you can be subject to an OCR investigation—even if those suspensions are completely justified by student behavior. Because your policy of suspending students who get into fights on school grounds will be said to have had an “adverse impact” on black students, you will face, at minimum, the negative publicity that comes from a civil rights investigation.

And when federal investigators come knocking, you will have to convince them (and not even an impartial judge) that (a) the suspensions serve an educational purpose and (b) that there’s not a better approach. Otherwise you can be found guilty of discrimination when in fact what you did was treat all kids the same according to their actions.

The message to administrators nationwide is quite clear: Get your discipline data in line, even if that means under-disciplining certain groups of students, or else you can expect a civil rights investigation. This is why many of us don’t think it’s a stretch to say that the 2014 policy imposed racial quotas on discipline and has likely had a chilling effect on discipline nationwide.

Though plenty of conservatives disagree, personally I believe that disparate impact theory has a limited but real role to play in ferreting out discrimination in certain domains, including hiring. When a facially neutral policy is intended to have a discriminatory impact, it’s appropriate for the government to put an end to it.

But it’s not a good fit for the complicated issue of school discipline. Here, a great deal of the racial disparities actually stem from differences in actual student behavior, which in turn is related to differences in socioeconomic circumstances. Threatening districts with civil rights investigations may reduce the number of suspensions, especially for children of color, but it may also increase disorder in the classroom by depriving teachers of an effective tool for maintaining order. That only serves to harm the peers of disruptive students, who are most likely to be children of color themselves.

To be sure, it remains essential for students and their families to have the right to file complaints with the Office for Civil Rights if the feel they have been subject to discrimination, and for investigators to examine the facts of their cases and come to appropriate judgments.

But jumping to conclusions from districts’ raw discipline data ought to end. School systems should know that if they are treating students fairly, the federal government will have their backs—even if some groups of students are suspended at higher rates than others.