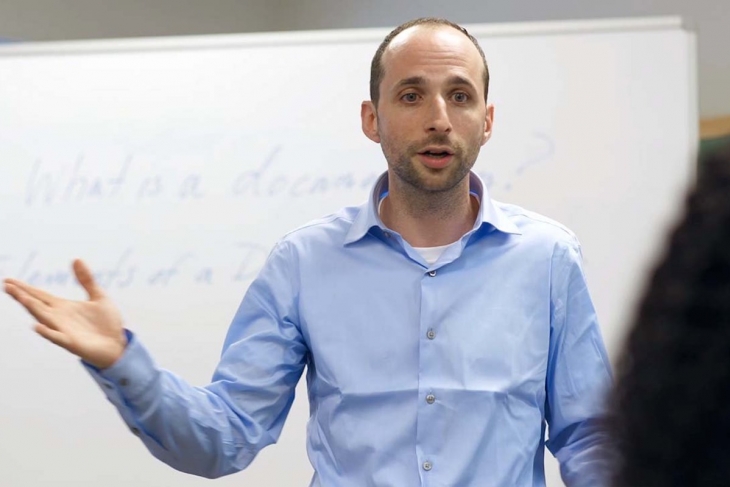 Few vocations have suffered more in the hands of Hollywood mythmakers than teaching. This is curious. Schools offer a familiar and fertile setting, and teaching is inspiring, aspirational work. There is rich potential for drama in student backstories or in a good teacher’s ability to change a child’s life trajectory. And say all you want about how teachers should be the guide on the side not the sage on the stage, there is a performative aspect to teaching that ought to lend itself to character-driven, compelling storytelling.

All of the elements are there. So why is it so hard to make a good teacher movie?

Mostly, it’s because, when the subject is school, filmmakers have never been able to resist swinging for three-run homers with one man on base. The clichés are legion: the inspiring maverick (Dead Poet’s Society) who unlocks the hidden brilliance of rowdy students (Stand and Deliver) while pushing back doggedly against the system’s low expectations (Lean on Me). Even worse is the subgenre of white savior teacher movies (Freedom Writers, Dangerous Minds) set in inner-city schools. We’re so conditioned by these tropes that when struggling musician Hanan Harchol tells his father over breakfast in a New York City diner in the opening scene of About a Teacher that he’s taking a job as a high school film teacher “to support myself while I’m making my art,” we smirk. Oh Lord, it’s Mr. Holland’s Opus. Here we go again.

To be sure, About a Teacher, currently streaming on Amazon Prime, follows the same story arc as other formulaic plucky teacher movies: A teacher of inner-city kids uses art to inspire students to tell their stories. But it makes a virtue of its small budget and human scale. The vast majority of the film is set inside the classroom, in the tiny apartment Harchol shares with his wife, or in diner conversations with his father. There are no big stars, no soaring soundtrack, no gritty mean street tableaus or tear-jerking grand finale. The movie it most closely resembles is The Class, a 2008 French film that was praised for its documentary style and verisimilitude.

The intimacy of the film enhances its credibility. It’s mostly about Harchol’s effort to master his craft and his struggles with student indifference and energy directed at anything other than what he’s trying to teach. It’s nearly painful to watch him try and fail to get students to comply with even the smallest requests. The movie should carry a trigger warning for teachers who will be reminded of how draining it is to be a new and poorly prepared teacher.

Harchol’s interactions with his fellow faculty members will likewise bring knowing smiles (or grim nods) from teachers. You know these people: the overconfident colleague who tells the novice not to smile until Thanksgiving to show students he means business. The veteran who won’t even acknowledge the new guy since he won’t last (the opening credits note that 41 percent of New York City teachers leave within five years). The humorless scold who has mastered behavior management but not her subject. The edgy and cynical banter in the faculty lounge. Harchol himself is the guy whose out-of-control class you walk past and feel sorry for. An officious supervisor is played to such icy perfection by Leslie Hendrix that when we learn she has been protecting and defending Harchol behind the scenes, it strains credulity. When she shows up in his classroom it is only to demand lesson plans and paperwork. Her professional development sessions are redolent with acronyms, bureaucratese, and demands for “higher order questioning” and pedagogical techniques that she seems not even to understand.

The only useful tips he gets come from a younger teacher, Ms. Martinez (Aurora Leonard). “Do you like your students? Do you talk to them?” she asks. It is only when Harchol starts to relate to his students as people (the movie is not 100 percent free from teacher movie clichés) that his and their performance begins to improve.

As Harchol, Canadian actor Dov Tiefenbach succeeds a little too well at being overwhelmed and frustrated. He is so lacking authority, presence, and the ability to project confidence, so physically overmatched by the job, that when he finally gets his feet under himself—in his third year in the classroom, not the third day—it seems implausible that he could have lasted so long without quitting or getting fired. The cognitive dissonance is only resolved at the end of the film with a montage of the real Harchol, who wrote, directed, and produced the semi-autobiographical film, with his students, many of whom won scholarships and cash prizes for their films and worked on About a Teacher. He looks the part.

Hollywood hasn’t nailed the teacher movie and perhaps never will. Classroom life is full of compelling characters and drama, but the scale is intimate, the pace deliberate and contemplative, not epic or explosive. The narrative arc of a teacher’s year unfolds slowly through hundreds of small actions and interactions. This puts filmmakers in a bind. Show too little, you reduce everyone to a tintype and character development feels forced and formulaic. Show too much and things slow to a crawl. There’s a rhythm to actual classroom life that is difficult to capture in two hours.

About a Teacher is not a perfect teacher movie, but it improves on the genre with its small scale, intimate focus, and attention to detail. It turns out that it takes a teacher to make a decent movie about a teacher.

Editor’s note: This article was first published by Education Next.