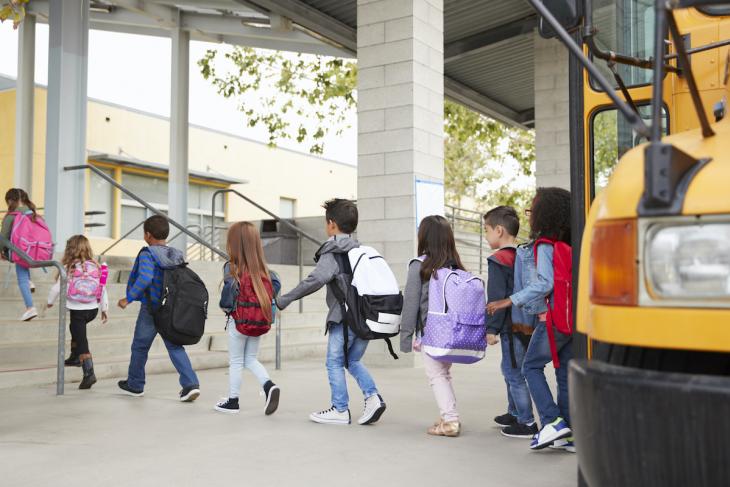 With more states and districts foreclosing upon the possibility of in-person learning through the end of the school year, the next few months will tell us a lot about whether our sector can muster the will and skill to overcome the contractual, logistical, and budgetary hurdles required to sufficiently meet the current challenge. To put a finer point on this, states and districts must soon be able to answer the question of what “social distancing” will look like in reopened schools this fall, and then figure out how to best leverage federal stimulus dollars to ensure a safe learning environment while preparing for the next exigency.

This presumes that things won’t be back to normal in the fall and that public health officials won’t advise against schools re-opening, so long as they can do so without allowing students to crowd together. Having spent a significant part of my career supervising elementary school cafeterias, I can attest that schools and crowding are like white on rice; my friend Rick Hess recently went into how schools might go about doing this. In all likelihood, it would involve reducing the number of students in school by staggering their schedules (i.e., having students come in on alternate days or adopting a half-day model in which some students attend in the morning, others in the afternoon) and rethinking time periods when large numbers of students typically congregate (e.g., hallway transitions, meals, and physical education). Transportation would also need to be reconfigured if districts were to reduce the number of students—perhaps halving the allowable maximum—permitted on any given bus route.

None of this will be easy or ideal. As long as a vaccine isn’t available (there almost certainly won’t be one until 2021), there will be some element of fear and apprehension about face-to-face schooling. To wit, former FDA Commissioner Dr. Scott Gottlieb says, “We’ll be running an 80 percent economy;” similarly, our aim this fall is to run schools at 80 percent capacity. (Not in reference to student enrollment, but capacity in the sense that things will be suboptimal.) Doing this well is, in its way, even more important—and even more knotty—than the current focus on feeding students and getting them online. Through no fault of their own, our education system obviously should have been better prepared for all of this, but that doesn’t justify an indiscriminate spending spree if we end up doing more of what we’ve always been doing. Instead, here are a few things elected officials and policymakers should focus on to help as many students return to school as quickly as prudently possible.

Democrats have already made known their interest in investing in highways and roads, among other infrastructure projects, as part of a potential fourth round of stimulus funding. School facilities and transportation should be part of this consideration. For example, coronavirus has put bankrupt hospitals back in demand as local governments seek to add beds. For schools, stepped-up classroom cleaning is a good start. But many districts, especially those located in large cities, have shuttered or underutilized buildings that could be leveraged to disperse students in safer numbers. Once the pandemic passes, newly retrofitted buildings could provide the added benefit of housing new schools (yes, including charter schools) where facilities space is highly coveted.

More bus routes during the day will put additional strain on both personnel and operating costs, so federal dollars here could provide states and districts some breathing room. Where available, city buses should be enlisted, too, assuming fewer people will be taking public transportation. Ridesharing also deserves attention. HopSkipDrive currently has seven thousand drivers transporting kids in over a dozen cities. In addition to taking some of the burden off of school and public transportation services, ridesharing brings with it the potential of solving the school choice transportation puzzle. Stimulus dollars would be well spent if the capacity of companies like theirs could be expanded safely and expeditiously.

Closing the digital divide will require a monumental effort akin to the federal project that brought electricity to darkened regions of the country during the New Deal. As commonsensical as this may seem, it’s unclear whether the nation is ready to make such an investment. Absent that, a robust and resilient K–12 distance learning system remains years away, but a federal infusion could help with the low hanging fruit. For starters, more school buses should be equipped with Wi-Fi, especially in districts serving low-income neighborhoods. Turning buses into hotspots has to this point been largely confined to discrete districts, but South Carolina’s statewide effort is a model that could be adopted in other states.

If students were to attend school in an attenuated fashion, districts would do well to look to higher education as a model, especially for middle and high school students. They could adopt a “flipped classroom” approach, borrowing from the college setting where there’s more independent work and less face-to-face time. But everyone will need to be able to work independently at home for this to work, so the current moment should be thought of as a dry run for this purpose.

Teacher training will also be an ongoing but necessary investment. As one veteran recently remarked, “This is my sixteenth year teaching, and I feel like I’m a first-year teacher. The amount of work and new things that I’m encountering on a daily basis is astounding.” If the journey of a thousand miles begins with one step, the feds should be interested in helping states make it a giant leap by turning to the trailblazers for insights and advice.

As much as we can try to use modern technological tools to help students continue learning over the coming months, sometimes it’s best to do things the old-fashioned way. Canceling summer vacation or redshirting some kids this fall would both require a nontrivial financial outlay, but it would be one worth making, knowing what we know about the potentially staggering learning loss in front of us. And contrary to what some may suggest, testing and accountability are arguably more important now that the federal testing requirement has been waived. How many states will keep open the possibility of assessing this fall or creatively improvise?

Figuring all of this out will be extraordinarily difficult, but it’s hard to overstate the importance of getting started. Assuming that testing continues to trend upwards, infections downwards, and an effective therapeutic drug is made available this summer, schools may be able to safely reopen this fall in areas of the country that are away from infection clusters. Teachers and students would have the confidence to return to school, even if the virus is still circulating, knowing that a robust treatment was available to reduce the chance of severe illness. But schools will also need to do their part to minimize the risk of infection, and federal funds directed toward the investments outlined above could make all the difference.