Good news for students and federalism: Most states step up on accountability under ESSA 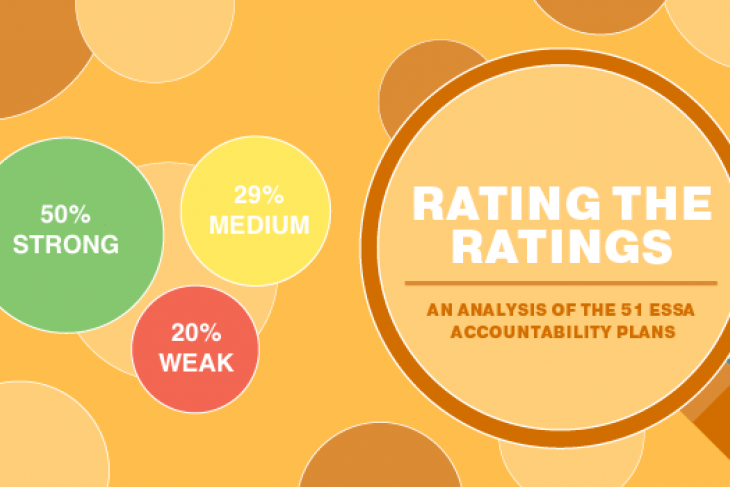 When Congress enacted the Every Student Succeeds Act (ESSA), shifting much education decision-making back to the states, many reformers, especially on the left, voiced concern that states would give up on rigorous accountability systems. “Federal pressure is a hard thing for people to swallow,” said Conor Williams, a senior researcher at New America, “but this law doesn’t give enough federal pressure for enough schools and doesn’t define the guardrails we need.”

That worry wasn’t unreasonable. Conventional wisdom indicated that opponents of results-based accountability—the teachers unions, superintendents, and other establishment groups, especially—wield enormous power in the states. With many of the “guardrails” of No Child Left Behind removed, nothing would keep vested interests in the education status quo from dismantling consequential accountability. In correcting NCLB’s flaws, states might throw the baby out with the bathwater.

We’re pleased to report that such fears turn out to be mostly unfounded. So we find and document in Fordham’s new study, Rating the Ratings: An Analysis of the 51 ESSA Accountability Plans. While there’s still plenty about the accountability systems of many states to criticize—and implementation challenges lie ahead for all of them—the school ratings at least represent more of an improvement on NCLB-era systems than a repudiation of them.

We examined the ESSA plans submitted by every state and the District of Columbia, seeking to gauge whether they’re strong, weak, or in-between in achieving three objectives: assigning annual ratings to school that are clear and intuitive for parents, educators, and the public; encouraging schools to focus on all of their pupils, not just their low performers; and fairly measuring and judging all schools, including those with high rates of poverty.

To be sure, accountability is merely one piece of improving academic outcomes for our students. We did not examine standards or the interventions (i.e., “consequences”) states propose to apply to chronically low-performing schools, though we offered some promising strategies on the latter in a report last spring. This analysis was intentionally limited to key elements of accountability that rigorous and well-respected studies have shown can and do drive school behavior.

Most notably, even though states had the option under ESSA to avoid rating most of their schools, the majority decided to continue doing so, and most actually made their ratings clearer and easier to understand. Indeed, more than two-thirds of states earn top marks for using straightforward and intuitive ratings such A–F grades, one to five stars, or user-friendly numerical systems. These labels immediately convey to all interested parties how well a given school is performing, and represent a major improvement over the often-Orwellian rating schemes of the NCLB era. On that score, the reformers won, and the establishment lost.

There’s more. Much of the country is also doing better at signaling that every child counts, not just the “bubble kids” near the proficiency cut-off. States can accomplish this by measuring achievement via average scale scores or a performance index, and by giving substantial weight to a measure of academic growth for all students from one year to the next. Twenty-three states earn top marks from us on this criterion, while fourteen more received credit for improving upon the proficiency-only frameworks that reigned under NCLB.

We found somewhat less progress when it comes to making accountability systems fair to high-poverty schools. Under the NCLB-era accountability regimes in many states, practically every school serving lots of low-income students was eventually designated as failing (“needs improvement”) because the dominant measures of school performance at the time—especially proficiency and graduation rates—are strongly correlated with prior achievement and student demographics. ESSA, however, allows states to focus on what’s within the control of educators: how much students learn while in their classrooms. Although just eighteen states get top marks from us for making growth the main focus of their new accountability regimens, another twenty-four others also made decent progress.

Given all these gains, can anyone be seriously unhappy, considering how many states have made their accountability systems fairer to more kids, fairer to high poverty schools, and clearer to parents, taxpayers and educators? It’s true—and regrettable—that some states have stuck with bad systems. It’s also true that most states should emphasize academic progress even more aggressively. But the ESSA plans as submitted still represent a nontrivial gain compared to decades past.

So now what? None of these plans is set in stone, and we hope that states will continue to refine their systems. There are now several great models to examine and perhaps emulate, especially (in our view) those proposed by Arizona, Arkansas, Colorado, Georgia, Illinois, New Hampshire, Oklahoma, and Washington. Congress probably won’t get around to reauthorizing the law for a decade or more. States need not—and should not—wait that long to make improvements.

But that’s a conversation for another day. For now, let’s celebrate the fact that states, by and large, seized this rare opportunity to make their school accountability systems clearer and fairer. In this time of political dysfunction, that’s no small thing.