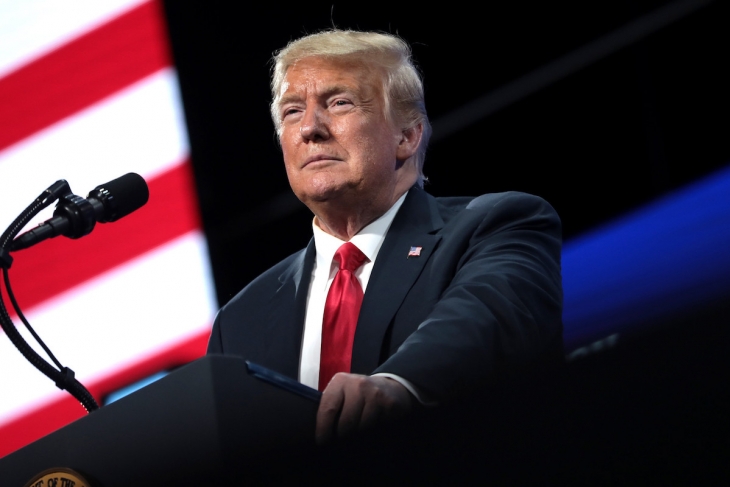 The Republican party has no 2020 platform. They refer people looking for one to the 2016 version. That goes for education along with everything else. The Trump-Pence campaign website doesn’t display policy positions, either, though there’s a section on “promises kept” that includes one skimpy page on education.

Thus anyone seeking a preview of what a second Trump term might mean for education (or anything) doesn’t have much to go by, other than “past as prologue.” That’s unprecedented, so far as I can tell, and manifestly unhelpful to voters.

The president’s lengthy acceptance speech to the GOP convention last Thursday did, however, include a short passage about his education plans and claims. The K–12 portion hit three points. Two were familiar and predictable: his insistence that schools open this fall and his praiseworthy advocacy of school choice and well warranted denunciation of that portion of the Democratic party platform.

His third point was less familiar: “We will fully restore patriotic education to our schools,” he declared. “We want our sons and daughters to know the truth. America is the greatest and most exceptional nation in the history of the world…. I want every child in America to know that you are part of the most exciting and incredible adventure in human history. No matter where your family comes from, no matter your background in America, anyone can rise with hard work, devotion, and drive. You can reach any goal and achieve every ambition….”

He went on at some length about the country’s impressive history and reasons why Americans should come to know and appreciate it. I share that view. Mike Petrilli and I recently edited a collection of essays that includes several ardent, thoughtful, well-informed pleas for U.S. schools to take history education generally, and “patriotic history” specifically, far more seriously in the future. Here’s an excerpt, well worth reading, from the Education Next version of Eliot A. Cohen’s superb contribution to that book, including the crucial link between patriotic history and the improved civic-and-civics education that’s now being urged by many people across the political spectrum.

Particularly for Americans, patriotic history is a kind of glue for an extraordinarily diverse republic. Lincoln used a patriotic version of the nation’s revolutionary past and founding generation to hold the Union together and provide meaning and redemptive hope after the slaughter of hundreds of thousands during the Civil War. The Gettysburg Address, after all, begins by recalling the Declaration of Independence and defining the meaning of the Revolution. And Lincoln in turn became a figure to inspire succeeding generations….

Civic education requires students engage with their history—not only to know whence conventions, principles, and laws have come, but also to develop an attachment to them. And civic education is also inextricably interwoven with patriotism, without which commitment to the values that make free government possible will not exist. Civic education depends not only on an understanding of fundamental processes and institutions (for example, why there is a Supreme Court, or why only Congress gets to raise taxes or declare war) but on a commitment to those processes and institutions, and on some kind of admiration for the country that created them and the men and women who have shaped and lived within them. In a crisis, it is not enough to know how the walls were constructed and the plumbing laid out in the house that Madison, Washington, and Lincoln built. One has to think that the architects did remarkable work, that as their legatees we need to preserve the building even if we modernize it, and that it is a precious edifice like none other.

Cohen is no Trump fan, nor are many other advocates of beefed-up civics and history education. Yet this they seem to agree on, and it ought to be something that lots of Americans could agree on—if we can agree on anything these days.

Tucked away in the President’s remarks on the topic, however, is a mystery posed by this pledge: “We will fully restore patriotic education to our schools.” What could he (or his team) mean by that? There’s a statutory prohibition against the federal government influencing curricula, much less mandating anything in that realm. This doesn’t mean Uncle Sam can’t help schools and teachers in various ways. Over the years, encouraged by such patriotic legislators as Senator Lamar Alexander and the late Senator Robert Byrd, both the National Endowment for the Humanities and the Department of Education have sought to support better history teaching, though it’s been almost a decade since the last appropriation for the main such program, named “Teaching American History.” The two agencies did, however, recently join forces to support an ambitious “convening project” that’s intended to strengthen both civics and history education.

That project is still underway—I’m one of many advisors—and is expected to produce recommendations that will likely include ways that Uncle Sam can help. Renewed funding for the mothballed history-teaching program would be a good thing, and extending it to include civics would be even better. Additional convenings would help, too. So would support for quality research in this realm and regular NAEP testing of students in these subjects in grades four, eight, and twelve with results reported by state as well as for the entire nation.

All good and all, I hope, moves that the Trump administration would back, both because the country would benefit and because this would be consistent with his mysterious but well intended pledge. Could we expect the same from a Biden administration? I sincerely hope so.