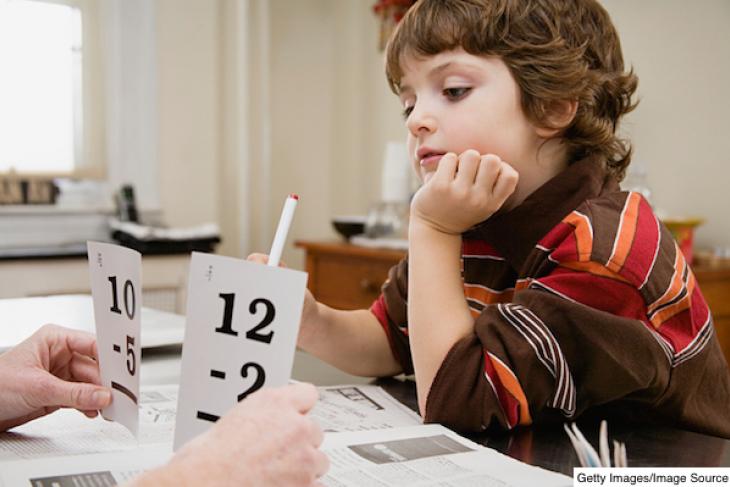 As a chubby girl at Treakle Elementary School (Mom said it was just “baby fat”), one thing I remember having to do was memorize my times tables. My well-meaning Dad and I sat at our kitchen table after dinner as he called out multiplication problems to me at lightning speed: six times six, twelve times eleven, eight times nine, ten times three. On and on it went. When I got one wrong (aargh!), he went back to it again (and again). Unnerving, to be sure, but I felt great pride at (eventually) memorizing the entire lot and I relished the ritual that Dad and I shared as Mom finished the dishes and my near-teen sister chatted forever on the phone.

I’ve since learned that not all teachers, kids, and parents are as smitten with memorizing fundamental math facts. Yes, some are adamant that kids must memorize the basics or they’ll fall ever farther behind. But others are just as convinced that memorization in elementary school damages youngsters academically and emotionally, stunting their genuine understanding of math concepts and leaving them frustrated, stressed, and math-averse.

Part of the rationale for academic standards is to standardize essential elements of what is taught and learned in core subjects of the K–12 curriculum. How that gets done is mostly left to the discretion of districts, schools, and teachers, but the fundamentals are supposed to be the same no matter where a student attends school.

Which brings us to the Common Core State Standards for math (CCSS-M). How do they treat the memorization of math facts?

Interestingly, the standards don’t ever use the word memorize. (Nor do they use the word automaticity.) Rather, they specify that students will know from memory their addition and multiplication facts by the end of grades two and three, respectively. One might assume that “know from memory” is synonymous with “memorize,” but apparently not. Some math folks say that there’s a big difference.

Yet I’m not alone in my confusion. In our latest report, Common Core Math in the K–8 Classroom, for instance, one grade-five teacher said, “Common Core is not the answer. Students do not know the basics needed to function in their grade level. Multiplication tables need to be memorized.” She seems to think that CCSS-M does not support memorization of multiplication facts (and who knows what she thinks of “knowing from memory”?).

To get to the bottom of how CCSS-M views memorization of math facts, I asked one of the lead writers of the Common Core Math standards: Jason Zimba. The questions below reflect our conversation.

Amber Northern: Is there a reason why the CCSS-M specify that students “know from memory” their addition and multiplication facts—versus simply “memorizing” them?

"By the end of Grade 3, know from memory all products of two one-digit numbers."

I don't think the important issue here is the word choice involved in "memorize" versus "know from memory." That difference is technical: Memorizing most naturally refers to a process (such as the one you and your dad engaged in), whereas knowing more clearly refers to an end; and ends, not processes, are the appropriate subjects for a standards statement. When the teacher in your survey says, "Multiplication tables need to be memorized," I take the teacher to be saying that students need to know the multiplication table from memory. And I agree. Some experts don't, but as we can see from the text of the standards, their view did not prevail. I don't think anybody could find the sentence on page 23 unclear. I do know there are people who wish that the sentence had not been included. Perhaps their discomfort interferes with their reading comprehension.

AN: Some folks seem to think that “know from memory” also means “being fluent in.” Can you clarify the difference?

JZ: They aren't the same thing, and the language of the standards makes this clear. Let's look again at the standard on page 23, which reads in full as follows:

3.OA.C.7. Fluently multiply and divide within 100, using strategies such as the relationship between multiplication and division (e.g., knowing that 8 ´ 5 = 40, one knows 40 ÷ 5 = 8) or properties of operations. By the end of Grade 3, know from memory all products of two one-digit numbers.

In the context of arithmetic, the word "fluently" is used nine times in the standards; there is also one instance of the phrase "demonstrating fluency." In every case, fluency pertains to an act of calculation. In particular, to be fluent with these calculations is to be accurate and reasonably fast. However, memory is also fast, so the difference between fluency and memory isn't a matter of speed. The difference, rather, has to do with the different nature of calculating versus remembering. In an act of calculation, there is some logical sequence of steps. Retrieving a fact from memory, on the other hand, doesn't involve logic or steps. It's just remembering; it's just knowing. The mental actions of calculating and remembering are different. The standards expect students to remember basic facts and to be fluent in calculation. Neither is a substitute for the other.

Researchers in cognitive science could probably find fault with my description of the differences between calculating versus remembering as mental actions. Setting all that aside, it still remains the case that the standards as written plainly treat fluency and memory as two different things. According to the text of 3.OA.C.7, you haven't met the standard unless you know the products from memory—even if you are fluent in calculating products and quotients.

These two revision committees certainly weren't confused about the difference between fluency and memory. They kept the fluency part and got rid of the memory part. Maybe the teacher in your survey who complained about the times tables was from South Carolina? At any rate, if she's referring to the Common Core, then she's laboring under a misconception.

AN: And there are multiple ways to help students meet the standards’ expectation of knowing the facts from memory, yes?

JZ: Yes, people do use a variety of curriculum materials, whether those be flashcards, games, digital apps, or what have you.

AN: That brings me to a clarifying question on strategies. A few standards relative to operations and algebraic thinking (such as 1.OA, 2.O.A and 3.OA) refer to “mental strategies” such as “making ten” and “decomposing a number leading to a ten.” Is memorization also a “mental strategy” to know your math facts from memory? It is tautological in my mind!

JZ: No. The term “mental strategies” here means mathematical methods. I'm happy to shed light on this as long as it's clear from the start that knowing the addition facts from memory is expected (page 19). But in the course of things, students will be working with sums before they know all of them from memory. So mental strategies are what a student uses to calculate the answer during that period of time before she knows the answer from memory. For example, suppose the question is "8 + 7 = ?" A typical first grader, certainly early in the year, will calculate that answer rather than retrieving it from memory. She might think along these lines: One more than 7 + 7, which I remember is 14, so 15. Eventually—if the standards are being met—she doesn't need the calculation process because she just knows that the answer is 15.

Nor is "remembering" a mental strategy, since memory is handled separately from calculation altogether, in the second sentence of 2.OA.2.

AN: Let’s keep on the topic of strategies for another minute. You use flash cards with your kids to help them learn their math facts. Other teachers use games. Yet these are different from the “strategies” (like “make ten”) listed in the standards. Is it more accurate to call flash cards and such manipulatives? I know it seems minor, but I think we need to be clear about what a “strategy” means in the context of the standards and what it doesn’t mean—and where questions of pedagogy justifiably come into play.

JZ: When the standards refer to a strategy, it means a mathematical method, not a material object like flash cards or dice. I would classify flash cards as curriculum materials.

AN: Another topic that could use clarification is what the Progressions mean by “just know.” For those who aren’t aware, the Progressions are CCSS-M related documents that are not part of the standards, per se; however, thirteen of the fifteen Progressions writers also served on the standards development team. The documents show how a math topic gets developed across grade levels. The document, in explaining fluency, says that it partially involves “just knowing” some answers.[1] Here’s the reference:

The word fluent is used in the Standards to mean “fast and accurate.” Fluency in each grade involves a mixture of just knowing some answers, knowing some answers from patterns (e.g., “adding 0 yields the same number”), and knowing some answers from the use of strategies. It is important to push sensitively and encouragingly toward fluency of the designated numbers at each grade level, recognizing that fluency will be a mixture of these kinds of thinking which may differ across students…[A]s should be clear from the foregoing, this is not a matter of instilling facts divorced from their meanings, but rather as an outcome of a multi-year process that heavily involves the interplay of practice and reasoning.

How, if at all, is “just knowing” different from “knowing from memory”?

JZ: They mean the same thing. "Just knowing" is closer to the way a student would talk. ("How did you get the answer?" "I just knew!")

AN: Is “instilling facts divorced from meaning” a critique of memorization?

JZ: Not unless you think that memorizing demands that we work in inefficient ways. Imagine you're a teacher working on the times tables with your students. Bear in mind, there are one hundred different single-digit products to learn. Here are nine of them: 1 ´ 1, 1 ´ 2, 1 ´ 3, 1 ´ 4, 1 ´ 5, 1 ´ 6, 1 ´ 7, 1 ´ 8, and 1 ´ 9. Will you really try to teach this batch as separate facts, divorced from their meanings? That would be colossally inefficient. Memorizing single-digit sums and products isn't like memorizing the alphabet. The alphabet is an irrational sequence with no structure or internal logic. It can't be optimal to memorize the addition and multiplication tables, with all their patterns, the same way we memorize the alphabet sequence. By pointing that out, I'm not critiquing memorization—I'm prompting us to think about the most effective way to reach the endpoint: knowing the single-digit sums and products from memory.

JZ: Of course. Above, you linked to an article by an educator who is "adamant that students must memorize the basics." I clicked through, and that author also agrees: "Children need to understand the times tables, and they also need to memorize them."

AN: Thanks so much for your help, Jason, in clarifying this important issue. Any final thoughts?

JZ: Thank you, Amber. I thought there was some good advice for parents in the first article you linked to ("Why Learning the Times Tables is Really Important"). To that, I might add my own contribution from earlier this year on the Flypaper blog.