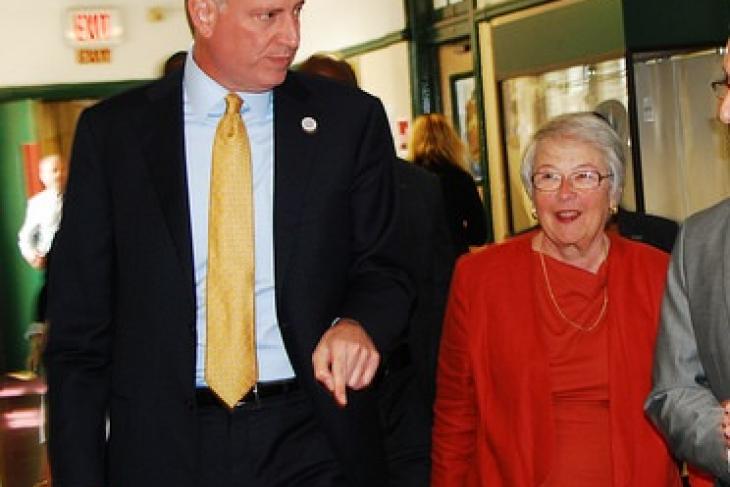 Editor's note: This post originally appeared in a slightly different form in the Daily News and City Journal.

Last week, New York City Schools Chancellor Carmen Fariña demanded that dozens of New York City’s lowest-performing schools adopt and implement a widely criticized literacy curriculum with which she has long been associated. It was the most recent of a growing list of decisions she has made while running the nation’s largest school system that seem to be based not on empirical evidence, but on the chancellor’s personal preference.

In November, the city unveiled its School Renewal Program, a $150 million plan to turn ninety-four chronically low-performing schools into “community schools.” A concept paper inviting community-based organizations to partner with the New York City Department of Education (DOE) noted the approach “is based on a growing body of evidence” showing that “an integrated focus” on academics, health and social services, and other community supports are “critical to improving student success.”

What growing body of evidence? The paper didn’t say—not even in a footnote. Perhaps because the evidence is scant to nonexistent. New York’s initiative is modeled on a similar program in Cincinnati, but as a 2013 analysis by the New York Times noted, “what has gone largely unsaid is that many of Cincinnati’s community schools are still in dire academic straits despite millions of dollars in investment and years of reform efforts."

It gets worse. Last week, Chalkbeat’s Patrick Wall reported that elementary and middle school principals in Renewal schools have been ordered to use a literacy program created by Lucy Calkins, founder of the Teachers College Reading and Writing Project—and to send their “best and brightest” teachers for training there. According to Wall, Fariña adviser and former Teachers College consultant Laura Kotch told the principals, “Those are the non-negotiables we’re starting with in terms of instruction.”

This “non-negotiable” directly contradicts the DOE’s own guidance. In 2013, as Gotham geared up to implement Common Core, the department recommended several literacy curricula, including Pearson’s ReadyGen, Core Knowledge Language Arts, and Expeditionary Learning. The latter two had already been selected by the New York State Department of Education (NYSED), and made available for free via the state’s EngageNY website. Fariña’s favored Teachers College Reading and Writing didn’t make the cut—a conspicuous omission given the program’s dominance in New York City elementary and middle schools since the early days of the Bloomberg/Klein era. As both a superintendent and later deputy chancellor for teaching and learning, Fariña advocated for use the program.

Calkins’s relationship with Fariña goes back decades. Calkins wrote the forward to A School Leader’s Guide to Excellence, a 2008 book penned by Kotch and Fariña (who has called Calkins her mentor). Since becoming chancellor, Farina has made no secret of her loyalty to her mentor’s notions about reading; she reportedly deployed them to good effect as the principal of P.S. 6, in the heart of Manhattan’s affluent Upper East Side. Klein meanwhile gradually soured on Calkins’s model, growing increasingly concerned it wasn’t helping low-income kids learn to read with comprehension. In 2007, he authorized a DOE pilot of E.D. Hirsch’s Core Knowledge curriculum in ten low-income schools. A subsequent three-year study showed clear advantages for Core Knowledge over demographically matched comparison schools on nearly all literacy measures among low-SES learners (full disclosure: I worked for the Core Knowledge Foundation from 2008–2012).

Once Mayor Bill de Blasio chose Farina as chancellor, Calkins’s brand of literacy instruction was poised for comeback. She quickly brought Calkins’s group in to lead a citywide Common Core literacy training despite complaints that her approach was fundamentally at odds with the new standards—and despite the tantalizing results of the Core Knowledge study. That prompted Dan Willingham, a University of Virginia cognitive scientist, to observe, “Rarely does a policymaker as much as say, ‘Screw the data, I'm doing what I want.’”

Doing what she wants seems to be Fariña’s default setting. In October, she announced that she was replacing fifteen of the city’s forty-two school superintendents. "To be a successful superintendent, you need extensive experience as an instructional leader and a proven record of success," she said at the time. Yet the New York Post pointed out that seven of the chancellor’s new supes had led schools that received poor ratings on the city’s own school progress report cards or scored below city averages on state exams.

Fariña’s tendency to be untroubled by data also extends to her public comments. In November, she suggested that some charter schools push kids out ahead of state tests to boost their test scores. The head of the New York City Charter Center, James Merriman, noted that Fariña could easily authorize release of enrollment and discharge data, which would prove or disprove the allegation. Merriman challenged the chancellor “to instruct the DOE to do so promptly.” United Federation of Teachers President Michael Mulgrew also called for the data to be released. It never happened, and Fariña neither withdrew nor walked back the comment.

It has become a given that the de Blasio administration’s education policy is ideologically driven. To be sure, no one will mistake New York’s mayor for a fan of charters, choice, and reform, but it’s hard to paint the mayor himself as data-averse. As a city councilman and public advocate, de Blasio advocated better data collection and analysis from the Administration for Children’s Services (ACS). As mayor, he chose for his police chief Bill Bratton, a man whose successful, data-driven approach to policing has been emulated nationwide. By contrast, Fariña’s relationship with data occasionally seems to border on contempt. Asked about the poor showing of Cincinnati’s vaunted community schools, Fariña called their results "pretty good"—a statement that’s not only hard to support with evidence, but also suggests a surprising lack of urgency about academic achievement in some of the city’s most hard-pressed schools.

Nowhere is Fariña’s tendency to favor pet programs more in evidence than in her insistence on pushing balanced literacy on the city’s new community schools—and signaling to the rest of the city’s schools her obvious preference for Calkins’s workshop model. Fariña has dismissed the Core Knowledge pilot study as too small. Fair enough. But someone charged with overseeing the education of 1.1 million children might at least be curious about such intriguing results and want to know more. Fariña has shown no interest in further study.

She likes what she likes.

“Calkins’s program flies in the face of everything we know about evidence-based reading instruction,” notes Susan B. Neuman, a professor of early childhood and literacy education at New York University. “What is particularly striking is that, given its wide reach in the city, we have seen no studies of any kind reported on its effects.” Neuman, the editor of the International Reading Association’s flagship Reading Research Journal is also unaware of any peer-reviewed article demonstrating the positive effects of Fariña’s favored form of reading instruction. “Rather,” she notes, “there is countervailing evidence that this model doesn't work.”

Meanwhile, New York City is paying Teachers College $500,000 for Calkins’s writing materials, which Chalkbeat reports will be used by sixty-five Renewal schools. Despite the lack of evidence of its effectiveness, Calkins & Co. billed nearly $6 million dollars to train teachers in its methods from July 2010 to June 2011 alone, according to the Hechinger Report. It is stunning that this relationship has not come under closer scrutiny—or that no one has pushed this chancellor explain how she makes decisions that materially affect the education and life chances of so many children.

There’s an absence of evidence in her decision making. And what evidence there is speaks to preference, ideology, and rewarding old friends—not effectiveness.