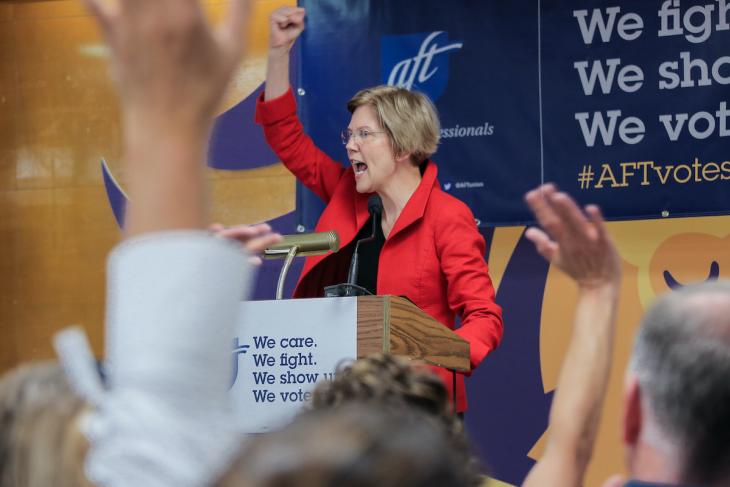 In The Gulag Archipelago, Aleksandr Solzhenitsyn writes of a rally held for communist leader Josef Stalin. At the event’s end, a tribute to Stalin was called for. As Solzhenitsyn writes, “Of course, everyone stood up (just as everyone had leaped to his feet during the conference at every mention of his name).... For three minutes, four minutes, five minutes, the stormy applause, rising to an ovation, continued. But palms were getting sore and raised arms were already aching. And the older people were panting from exhaustion. It was becoming insufferably silly even to those who really adored Stalin.”

After 11 minutes, the paper factory director stopped clapping. Others followed. That night, the director was arrested and sent to prison. Concluding the chilling narrative, Solzhenitsyn reveals that, as he was sent away, the director was told, “Don’t ever be the first to stop applauding.”

The Stalin comparison notwithstanding, many of the Democratic presidential candidates’ education plans seem focused on ensuring that the nation’s teachers unions see them clapping, and know that they’ll continue clapping with escalating froth and vigor, until their loyalty is rewarded. This game of one-upmanship should trouble all families, as well as those concerned with the health of our strained democracy.

Many candidates began by simply offering the unions money, with Sen. Kamala Harris promising federal funds to raise teacher pay. Teachers unions love this sort of no-strings federal intervention. But while raising teacher pay is laudable, there are serious concerns with this strategy, among them that it ignores genuine variance in teacher quality.

With candidates promising bales of money, the teachers unions made it clear that more clapping was required—perhaps most visibly through their strikes in Los Angeles and Chicago, and the hard anti-charter bent they all featured (with United Teachers Los Angeles demanding that the L.A. School Board vote on a moratorium, for instance). Sen. Bernie Sanders heeded the call with a broadside against the nation’s charter schools—which disproportionately serve kids of color—in his ironically named Thurgood Marshall plan. In it, he promises to stop the growth of charters, which he describes as being “led by unaccountable, private bodies,” with “their growth [draining] funding from the public school system.” The teachers unions see every dollar in a charter school as a dollar they should have. Sanders seems to agree.

Not to be outdone, Sen. Elizabeth Warren vowed to end authorizing (the process by which charter schools are created) as we know it, turning the power over to school districts exclusively. This would make the competitors to charter schools their regulators, ensuring an end to their expansion regardless of demand. The day after the plan’s release, Warren joined striking teachers in Chicago—who had recently refused a 14 percent pay raise from one of the country’s most progressive mayors, Lori Lightfoot, shouting, “The unions are how we have power.” Of the strike and its support from Warren and other Democrats, former Obama adviser David Axelrod noted, “There’s a great deal of competition within the field for support on the left, and there’s a great deal of competition for support from teachers nationally.”

But Warren seems to have gone further. In viral footage released from a backstage meeting in Atlanta, Warren dissembled to an African-American parent about where her own children attended school when confronted about her anti-charter platform. Regardless of what it says about the senator’s willingness to engage a constituent of color in good faith, it should disturb us all that candidates feel they must distort their own school choices to prove they are “public education” loyalists or that they must, perhaps, do so to secure the endorsement of the nation’s teachers unions. The former would just be distasteful, but the latter would indeed be new and dangerous territory.

Given the fallout from Warren’s Atlanta faux pas, one might think the candidates would move on. But no. In the latest bout of percussive attention-seeking, Sanders announced that he would essentially end the state testing regimes started under the bipartisan compromise known as No Child Left Behind—the education legacy of the late Massachusetts senator Ted Kennedy and former president George W. Bush. In an op-ed, the senator proudly asserts that he voted against the bill and goes on to thump testing with numerous well-worn tropes.

Here it is instructive to look historically at the senator’s ahistorical take. While good people may disagree on the current role or amount of testing in America, we should remember Bush’s belief that testing students—once a year—and publishing the results was critical to attacking the “soft bigotry of low expectations” that pervades many of the nation’s urban school systems. Perhaps it’s unsurprising that a millionaire senator from a state that is 1.4 percent black wields his opposition to this policy as a badge of honor. The millions of students who have benefited from this spotlight on school performance, however, may differ.

The national teachers unions have a plan to make education great again, and too many candidates are cheering it on. How long will the applause continue? For the sake of many American families looking for the right fit or just trying to get a fair shake from their local school, hopefully not much longer.

Editor's note: This essay was originally published by The 74.